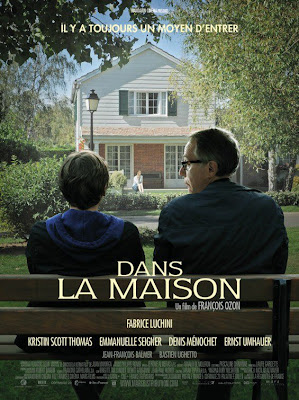 As synopsized by IFF Panamá: "A high school French teacher (Fabrice Luchini) becomes implicated in a series of increasingly precarious and unethical acts when he encourages a student to explore his fantasy of insinuating himself into a classmate's home. François Ozon's latest film fuses psychological thriller with class-conscious comedy, creating a twisty meditation on voyeurism and the dangers of storytelling."

Adapted from Juan Mayorga’s play The Boy in the Last Row, Dans La Maison (In the House, 2012) reunites Ozon and Luchini (who worked together on the clever Potiche), but to less winning effect, partly because it attempts to fuse too much together and reveals its processes of fusion way too willingly. Just when you’re starting to invest in the characters, they start dalliancing around the script itself, pulling down the fourth wall in a staged-as-sophisticated but increasingly disingenuous manner that left me dissatisfied and put off by film’s end. Still, it's a frothy experiment at storytelling, melding film with literature, even if breaking the fourth wall is hardly novel and has been explored more expertly elsewhere. For an informed analysis of this playful device, I recommend Catherine Grant’s essay “Breaking the Fourth Wall: Direct Address and Metalepsis in the Cinema and other Media” at Film Studies For Free.

The performances in Dans La Maison are playful enough, even if the characterizations are implausible, with a particularly notable debut by newcomer Ernst Umhauer as 16-year-old Claude who exhibits both a put-upon vulnerability and a slightly amoral adolescent menace; in other words, a classic puer leaving emotional devastation among the gullible adults in his wake. Kristin Scott Thomas co-stars in a characteristic pinched performance that is nonetheless pleasantly humorous. She’s an art gallery owner desperate to find art she can actually sell. Her exhibition of sexual dictators was my favorite self-conscious flourish in the film. The lovely Emmanuelle Seigner does the honors as Claude’s object of desire.

At Fandor, David Hudson rakes in the reviews from the film’s theatrical release, whereas Steven Erickson interviews Ozon. Earlier, Hudson reported on the film’s double-win at the San Sebastián Film Festival—the Golden Shell for Best Film and the Jury Prize for Best Screenplay—and its earlier win of the FIPRESCI prize for Special Presentations at last fall’s Toronto International.
Posted by Michael Guillen at 4/20/2013 07:15:00 PM