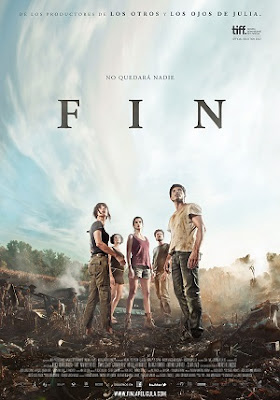 Fin / The End (Dir. Jorge Torregrossa, Spain, 2012, 90m)—As synopsized by IFF Panamá: "The first feature from Spanish director Jorge Torregrossa is a stunning apocalyptic thriller set against the awe-inspiring peaks of the Pyrenees, where a group of friends find themselves at the mercy of nature—and their own psychic demons—after a mysterious, all-encompassing blackout."

Elevated genre maintains its philosophical heights in Fin, which takes all the bite out of the ubiquitous zombie apocalypse to present a more chilling fade-out, as stars begin to blink out of the sky, and people disappear one by one from one second to the next off the face of the earth for no known cause or reason. By avoiding any evident external threat, nor offering any alternate explanation, the scenario achieves gravity and mysterious depth, becoming—as noted at the film's Palm Springs International screening—"a thoughtful meditation on human connectedness and individual identity." It's always lovely to watch Maribel Verdú, no less here than in Blancanieves—IFF Panamá's opening night gala—and the rest of Fin's good looking cast makes their disappearances one by one all the more poignant. Co-written with acclaimed screenwriters Jorge Guerricaechevarría (Live Flesh, Cell 211, The Oxford Murders) and Sergio G. Sánchez (The Orphanage, The Impossible), Torregrossa has created the rare genre film that's artful and thought-provoking as well as gripping entertainment. Official site [Spanish]. IMDb. Wikipedia.

For her program capsule for the 2012 Toronto International Film Festival (TIFF), Diana Sanchez writes: "Brilliantly and relentlessly building the tension to a hair-raising pitch, Torregrossa's end-of-the-world allegory milks its sci-fi conceit for maximum suspense. Framing his protagonists against the majesty of a towering landscape that seems to dwarf the human drama played out beneath its indifferent gaze, Torregrossa transcends the boundaries of genre to offer a profound meditation on a fundamental philosophical question: what does it mean to exist, and to share that existence with others?" Of related interest, the Q&A for Fin's TIFF screening is available at YouTube. At Cineuropa, Alfonso Rivera states: "Beneath its appearance of a mainstream film, The End is, more than anything else, an existential film. It speaks of destiny, what we are, wounds from the past, and how we are conditioned by the gaze of those who surround us. ...A melancholy, psychological, and nihilist nightmare that Torregrossa has nourished with his obsessions: ambiguity, suppressed desire, and disenchantment. The result is a film that looks commercial—it is already being compared to the television series Lost—but that hides strong doses of depth." Cineuropa also hosts Rivera's interview with Torregrossa.
Posted by Michael Guillen at 4/04/2013 07:16:00 PM