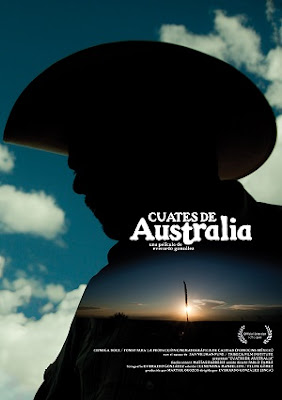 Cuates de Australia / Drought (Dir. Everardo González, Mexico, 2011, 83m)—As synopsized by IFF Panamá: "A work of lyrical ethnography, Everardo González's Drought explores the isolated community of Northeastern Mexico's Cuates de Australia ranch. Cuates' inhabitants struggle with annual droughts, yet González emphasizes the richness of their way of life rather than their woes. The result is one of the most singular cinematic experiences on offer this year." As someone who grew up now and again working in the fields and on ranches, I had nothing but respect for the tenacious spirit depicted in Drought. Perseverance and humor furthers. González crafts a simple but effective alignment between the coming of the rain and the birth of new children. Winner: Best Documentary, Los Angeles Film Festival. IMDb. Facebook.

At Slant, Andrew Schenker writes: "Fixing its gaze on the parched landscapes of rural, northern Mexico and the people who survive the region's unforgiving climes, Drought is a portrait of a community under siege by forces beyond its control and its attempts to go about the daily stuff of life. Employing largely unobtrusive observational camerawork, spliced with a few interviews with the locals, Everado González's documentary brings to the screen both an eye for stark beauty in desolation and a sympathetic look at the citizens of the communal town of Cuates de Australia." At The Hollywood Reporter, Sheri Linden offers: "As he intended, González's feature transcends the genre of ethnography; he has shaped his eye-opening chronicle with a powerful aesthetic sensibility. Pablo Tamez and Matías Barberis' ambient sound is a fine complement to the visuals. Further heightening the material's impact, to haunting effect, are 1970s recordings of cantos cardenches—folk songs that are, fittingly, named after a type of cactus. With their aching melancholy, these a cappella numbers for three voices are the perfect accompaniment to the understated drama unfolding in this dusty terrain."
Posted by Michael Guillen at 4/04/2013 07:47:00 PM