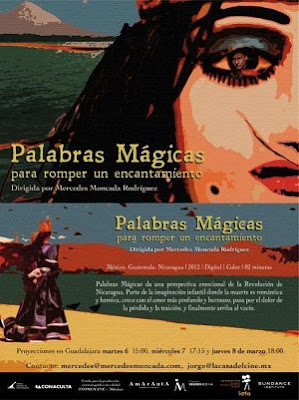 Two documentaries screened back-to-back at IFF Panamá's new venue, the Teatro Anita Villalaz (situated in the National Institute of Culture), both of which utilized the poetics of memory to further their narratives, albeit by slightly different strategies. Mercedes Moncada Rodríguez's documentary Palabras Mágicas (Magic Words, 2012)—situated in IFF Panamá's "Stories From Central America" sidebar—configured memory as an expression of history. In fact, her documentary quite brilliantly demonstrated how it is the commonplace nature of our everyday struggles that truly places us within the historical moment, which unfolds as it occurs but is given context and underscored import as it is remembered, suggesting as well the ongoing tension between popular memory and official accounts of history.

Her's is a sad reflection on the betrayal woefully built into revolutionary zeal. As synopsized by IFF Panamá: "Magic Words underlines how the Revolution and the subsequent government, rather than usher in a wave of radical change, simply offered proof to the notion that history is destined to repeat itself." With so much being said these days about the loss of a moral compass, Palabras Mágicas cautions that—when a people lose their point of reference—they don't know where to go and, as a consequence, end up circling back again and again, disoriented, repeating the lessons they have not learned from history.

As Rodríguez introduces her own film: "Here in Lake Managua, reside the dissolved ashes of [Augusto César] Sandino. Will the contents change the container? Lake Xolotlán is possessed by him, Sandino. If this is true then this is all of Managua, because it is the city's sewer and the waste comes from us all. I am like this lake that—like Nicaragua—is not like a flowing river always renovating itself, for I hoard and save. Palabras Mágicas is my emotional perspective of the revolution in Nicaragua."

By jumping back and forth in time Rodríguez seeks to juxtapose the lofty promises of the Revolution fueled by the Sandinista National Liberation Front (who took their name and inspiration from Sandino) and provocatively aligns them against the deflated compromises that resulted in the Sandinistas eventually behaving no differently than their ousted predecessor Anastasio Somoza Debayle, leaving the Nicaraguan people no better off than before the Revolution. This structural strategy, rife with potential for poetic counterpoint, proved sometimes confusing, though its basic thrust of how the Somoza regime and the Sandinistas simply switched abusive authorities came across loud and clear.

It's also of note to state that Latin American documentaries rarely flinch from portraying U.S. intervention in an appropriately harsh light. In fact, the perception of Sandino as a Nicaraguan hero is precisely because of his resistance to U.S. domination. This remains for me one of the most difficult aspects of being a U.S. citizen—knowing of our government's sponsorship of dictatorships that have overthrown Latin American democracies; knowing that each American citizen is guilty by implication—especially for having no political will to do anything about it. In this sense U.S. citizens are as disoriented as Nicaraguans, having lost their moral point of reference. Through her emotional perspective, Rodriguez beautifully comments on the hypocrisies of military governments on all sides of their wars.

I was stunned by archival footage of the Nicaraguan resistance lifting cobblestones out of the streets to fight the Somozan forces, especially in light of the fact that Somoza owned most of the cobblestone factories in Nicaragua, whose product he sold back to his own country to pave roads, never dreaming that these roads would be ripped up by hand and that these stones would one day be used against him, victoriously leading to his regime's collapse. Visually, it reminded me of the student protests in Paris in May 1968 where, likewise, cobblestones were dislodged to wield as projectiles. 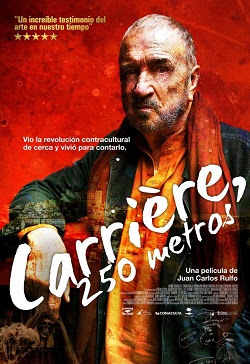 Juan Carlos Rulfo's affectionate portrait of scenarist Jean-Claude Carrière likewise yokes memory to poetry, but more from the individual perspective of an older man's nostalgia for days gone by. I could relate so much to this elder statesman recalling his youth of 40 years past, back when being a hippie meant running away from the culture of our parents and dreaming that love and peace could change the world. How have we come, Carrière asks in voiceover, from peace and love to 9/11? 40 years later, I am asking many of the same questions.

The title of Rulfo's documentary Carrière, 250 Metros (Carrière, 250 Meters, 2013) references the fact that his family's grave plot lies no more than 250 meters from the house where he was born. But what begins at first as a circumscribed tribute to his family roots in a small village in Languedoc expands outwards into a compelling exploration of the cities Carrière has claimed throughout the course of his creative career. His deep taproot into the soil of his family home offsets his creative rootlessness, which has propelled him outward, seeking creative adventure over the face of the planet. Thus, Carrière , 250 Metros becomes as much a meditation on the acquisition of space as it is on the diminuation of time; a clocked cartography wholly personal and hand-drawn.

Carrière's recollections of his friendships and creative collaborations with Salvador Dalí and Luis Buñuel recount their ritual pilgrimages to Toledo, Spain, thereby delighting in the comforting patterns that enforce friendship. And Carrière's love for Miloš Forman is beautifully captured by photojournalist Mary Ellen Mark, both in their youthful questing embraces, and their elderly assured ones.

I left this film quite wistfully, wandering through the labyrinthine streets of Casco Viejo and—taking Carrière's cue—imagining the lives within half-lit residences, pausing at a corner to watch a group of children spilled out onto the sidewalk and into the street singing along with a song playing on a radio. It moved me to tears. A sultry breeze off the water made me feel that I was floating on air, and traveling—as Carrière suggested—not to see things, but to not see things; that is, to go within, to use travel as introspection, to allow the beautiful distractions of the world to wash over me as I center myself within.
Posted by Michael Guillen at 4/22/2013 01:39:00 PM