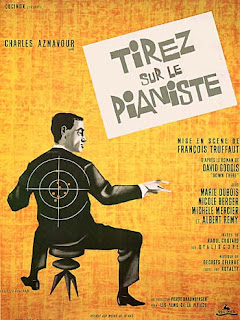 One of the interesting things about David Goodis's career, Steve Seid mentioned by way of introduction to François Truffaut's Tirez sur le pianiste (Shoot the Piano Player, 1960), is that—even though Goodis's first connection to filmmaking occurred in 1947 with Dark Passage and The Unfaithful—attempts to adapt his work have continued to the present day; Seid recently met someone working with Goodis's 1951 novel Cassidy's Girl. Along the way, going all the way back to 1954-1955, the French have been particularly attracted to Goodis's novels and—of the twelve existing feature adaptations—eight have their roots in French filmmaking.

The earliest was Pierre Chenals' Section des disparus made in Argentina during the mid-50s, continuing on with Henri Verneuil's Le Casse (The Burglars, 1971), René Clement's La Course du Lièvre à Travers Les Champs (And Hope To Die, 1972), Jean-Jacques Beineix's La Lune Dans Le Caniveau (Moon in the Gutter, 1983), and Francis Girod's Descente Aux Enfers (Descent Into Hell, 1986). The French outdid the Americans, picking up and running with Goodis's work, even though Goodis is a Philadelphian and his writing is set in specific American locales. François Truffaut's Shoot the Piano Player—the best known of the Goodis films ("and perhaps even the best")—is included among these French adaptations.

Seid credited Detroit author Mike White, who has written extensively on Goodis and who administers Cashiers du Cinemart, as "nearly a counselor" on the PFA series. White generously helped Seid locate certain of the films and agreed to introduce Shoot the Piano Player. His generosity, in fact, has extended to The Evening Class, to whom Mike has offered his written notes on the film. Thanks, Mike! 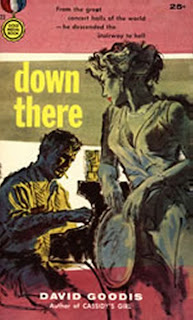 Last night in his introduction to Dark Passage, author Barry Gifford talked about how David Goodis's Down There was reprinted by Black Lizard as Shoot the Piano Player. This wasn't anything new. The book was only known as Down There upon its initial 1956 release by Gold Medal. It's been Shoot the Piano Player since 1962. No other Goodis book has been as "influenced" by its film version as this book.

The story of Shoot the Piano Player is one familiar to David Goodis fans; a man rises to the top of his profession only to be cast down, going from the stars to the gutter where he wallows in the muck. He's not an actor; he's acted upon by the big cold world. This is the theme not only of Shoot the Piano Player but also Street of No Return, and Nightfall. This didn't go unnoticed by Truffaut. The director, along with co-screenwriter Marcel Moussy, picked up some dialogue from Nightfall, working it into the opening scene of Piano Player.

The irony is that this oft told tale of the rise and fall from greatness of the artist (painter, singer, pianist) can be related to Goodis's own story; the unknown writer who has a hit with his Saturday Evening Post serialization of Dark Passage. He goes to Hollywood to work as a screenwriter, has a few good things happen to him before his contract is terminated and he goes back to Philadelphia to live with his folks; pounding out book after book with decreasing frequency until passing away in 1967. 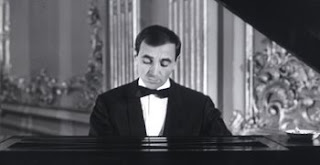 I hesitate to use such a trite phrase but Truffaut's second film was truly ahead of its time. The tone shifts from high comedy to heart wrenching sorrow as the film transforms from one genre to another, leaving a lot of critics puzzled to the point of anger upon its initial release. Some claimed it was Truffaut's sophomore slump, a disappointing follow-up to The 400 Blows. He was reaching far beyond his grasp.

Ironically, though critically derided ("maybe they should have shot the piano player, hardy har") this French fare has fared far better than other Goodis adaptations (with the possible exception of Dark Passage). No other movie based on a Goodis book has gotten the "Criterion treatment."

Almost 50 years after its release the drastic changes in tone in Shoot the Piano Player are common place. This movie serves as a precursor to pastiche films like Pulp Fiction. The gangsters, Ernest and Momo, talking about women's undergarments and wearing their sister's panties—that leads directly into Jules and Vincent in Pulp Fiction talking about foot massages. Just like Jules and Vincent, Ernest and Momo may initially appear comedic but they're fairly effective when need be. 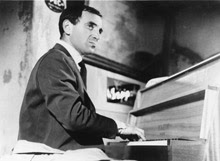 There's a lot more going on than Truffaut mixing genres here. Shoot the Piano Player is a love letter to the American gangster classics as well as a critique of the French Crime cycle that was in vogue during the '50s. Melville and Godard had already used the gangster milieu as sounding boards for more Nouvelle Vague ideas. Truffaut took it one step further.

More than the rise and fall from greatness and its incredible left turns in tone, Shoot the Piano Player is a tapestry of themes that enriches the film experience. Truffaut, the "Gravedigger of French Cinema," had been railing in the pages of Cahiers du Cinema through the fifties. Like his hero, Alfred Hitchcock, Truffaut isn't the kind of filmmaker to rely on "happy accidents," rather you can read the subtexts of his works without worrying about reading something that wasn't intended. And if you happened to read something that he hadn't intended, he'd probably claim responsibility if it was a good interpretation.

Shoot the Piano Player is filled with doubles. The landscape is dotted with mirrors and there's a play between black and white that goes far beyond the film stock. This is exemplified, for me, when the character of Fido—the main character's younger brother who is one of the few major derivations from Goodis's original work—throws a container of milk onto the windscreen of Momo and Ernest. "The opacity of the whiteness contrasts their dark designs." This is echoed later during the film's climax which takes place in lovely fields of snow, once again recalling the last act of Jacques Tourneur's Nightfall. Rather than being mired in the inky shadows, real terror can come in a world of blinding white.

At the heart of the film our main character is himself a double. He's both Edouard Saroyan and Charlie Koller. One is at the top of his game as a concert pianist while the other bangs out the same rote tune in a Parisian club night after night. Yet, Edouard/Charlie aren't as starkly different as the black and white keys on his piano. More than being a diametrical split, his life is a yin and yang circle; an ouroboros—the snake swallowing its own tail. Everything plays out for Edouard/Charlie again and again; he falls for a waitress, there's a tragedy, and all the while the same old song plays on.