STREETS OF NO RETURN: THE BURGLAR—Introductory Remarks by "Noirchaeologist" Eddie Muller 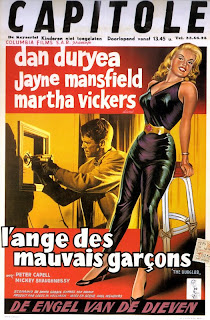 Eddie Muller noted that The Burglar (1955) was something of a homegrown production, in that David Goodis and Paul Wendkos, the film's director, were both from Philadelphia. The producer Louis Kellman wanted to shoot a film in Philadelphia in the late '50s and turned to Goodis who—at this point in his career—had fallen from grace in Hollywood. This reinvigorated Goodis who was excited about working on a film outside of Hollywood and making it with people he knew; in this case Dan Duryea and Martha Vickers, who came to Philadelphia and Atlantic City to shoot this big deal low budget film. 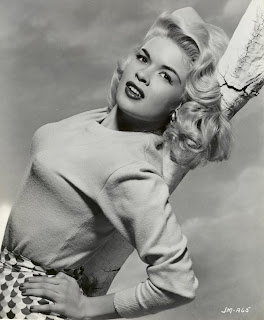 Though IMdb lists the release date of The Burglar as 1957, the film was actually shot in 1955 but didn't achieve a distribution deal for two years, which is important primarily because The Burglar features Jayne Mansfield before she was "Jayne Mansfield." Hailing from Bryn Mawr, Pennyslvania, Kellman "discovered" Mansfield while she was shooting Pete Kelly's Blues (1955) where he observed that every guy on the crew was going nuts over this woman. When The Burglar was finally released, it coincided with the explosion of Jayne Mansfield with The Girl Can't Help It (1956) and Will Success Spoil Rock Hunter? (1957). "Believe me," Muller quipped, "[The Burglar] was not sold as a David Goodis production; it was sold as a Jayne Mansfield film." She was full-figure on every poster. 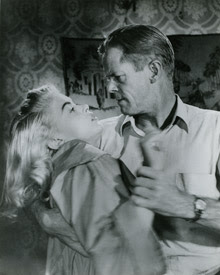 Dan Duryea gives a terrific performance in The Burglar, playing a bit against type, less of a weasel and obvious villain as in most of his film noir performances and much more in David Goodis terrain. Though Paul Wendkos went on to have a fairly successful career—primarily as a television director among several feature films—The Burglar was his first directorial effort and exhibits telltale signs of a young director obsessed with the movies, missing no trick in the book that he can trot out. You get it all. You get the camera in the wall safe and every conceivable match cut. All things considered, The Burglar is an exciting piece of filmmaking. 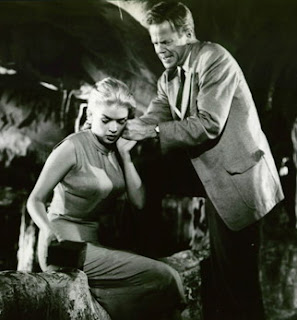 Appreciating Steve Seid's earlier comments about his directorship of the Noir City film festival and his active efforts to locate and restore film noir prints, Muller admitted that sometimes the noir universe can make your head want to explode. But every now and then he receives a letter that makes it all worth while and—to that effect—Muller read a piece of correspondence he received from a fan in Iran who had stumbled onto the Film Noir Foundation website. Muller had already admitted to this guy that he didn't "get" how someone in Iran would be interested in American film noir. The fellow responded in somewhat broken English: "Dear Mr. Muller: When I received your mail, it exhilarated me to some extent that it almost woke me up all through the night, all sorts of ideas and thoughts without clear focus came into my mind. One thing is very sure: you made me very happy and thank you for that. It was like a signal from beyond space. In the morning before writing these lines, I was reading morning papers. The possibility of war increases every moment. The lunatic people who are running this country are pushing the nation to another disastrous situation and it seems like nobody cares anymore. Iran has two different and opposed cultural and social layers. One: brute, ugly, uneducated, dangerous, fanatic and corrupt. And the other: intellectual, deeply cultural, decent and advanced in every aspect of life. But the first layer—at least in the world's view of Iran—covers the intellectual side. Every day it casts a darker shadow on the lives of decent people. It's completely a noir plot on a very huge scale, almost apocalyptic. It seems nobody cares if the U.S.—or more possibly Israel—attacks the country because most of the people think this isn't their country anymore. They think they would parade on the streets and welcome American soldiers like what the French people did in 1944. Yes, this is an occupied country. The only difference is it is occupied from the inside. The country under the Islamic Republic rule since 1979 is what I call a perfect noir world: complex paradoxes, nightmarish life, hidden sexual relations, all kinds of bootlegging and illegal activities, political corruption, underground lives—from different variations of criminal life to underground artistic life—reminds us all of the Nazis, and all based upon fate and destiny. Nobody knows about tomorrow. Nobody cares about tomorrow. An existential choice in building a moral world is each individual's cause and brings serious attention to all kinds of arts. Regarding cinema or music in this country, it's equal to finding a murderer in a noir world. It's an inward journey from the surface. Finding meanings from this battlefield of life—as Samuel Fuller calls it—made me stick to cinema almost maniacally. If one more time the flames of war break out in this country, God knows what will happen. The other day I was talking to a friend about how many years I have spent on American arts—movies, jazz and architecture—and if anything happens here and a military confrontation is unavoidable, I will suddenly turn in a second into the enemy. First of all, an enemy of the Americans. Then, if I show any sympathy to Americans, I'll be the Islamic Republic's enemy. This is a noir plot. Now I deeply understand what German immigrants felt in the U.S. during the war and when they came back to their country after the war and what really was the mental foundation of all those great noir masterpieces by Lang, Ulmer, Siodmak, and Wilder. Sometimes when things look so bad and we smell another stupid war near us, I think about Roberto Rossellini's Paisan (1946) when American troops land in the south of Italy and as they're moving north nothing remains but crying babies, dead bodies and dying dogs on the bare ground. Anyway, this daily paranoia is my answer to 'Why film noir in Iran?' "