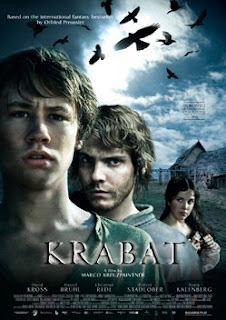 There's good reason why I listen to my editor Todd Brown at Twitch. Though he understands that I have auteurist leanings when it comes to the films I catch at the Toronto International, he also understands that deep inside I am a teenager in love with the magic and spectacle of film. Thus, when he cautions that the Sprockets Family Zone should not be overlooked when I'm graphing out my schedule because—lo and behold!—there might be a crossover gem to be found there, once again he's prescient. I agree with him that this year it might be Krabat, a German teen fantasy film about a youth being taught magic. "It would be easy to write this off as a Harry Potter clone," Todd argues, "except that it looks far, far darker in tone than any of the Potter films have been so far, much more in line with fantasy pictures from the late eighties than anything current, only with much better production values." Check out the Twitch Trailer Park or the film's website for a full-screen trailer. You don't even need to speak German to have its magic communicate! 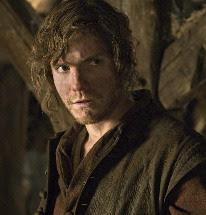 Official synopsis: The Thirty Years' War has brought much death and destruction to central Europe, and has left 14-year-old Krabat an orphan. Lost and devastated, Krabat's keen survival instincts lead him to a remote valley, where he finds a mysterious mill run by an ominous figure known as the Master. The lure of safe haven, hot meals and an apprenticeship under the Master is hard to resist… But gradually Krabat uncovers a horrifying secret: the mill is in fact a school of black magic and the Master is in league with satanic powers. While Krabat and his young colleagues revel in the teachings of the Master, they realize there is a price to pay: complete submission to the Master and even death. After Krabat witnesses Tonda, his closest friend at the Mill, perish at the Master's hands, the fire of rebellion starts raging within the young boy. He realizes that the only way out is to defeat the Master in a duel. In the face of such adversity, Krabat is able to find strength through the lovely Kantorka. Armed with nothing but courage and their united love, together the young couple brave the Master and the arsenal of magical powers that make him nearly invincible. But can the power of love alone be enough to eradicate the power of black magic?

A dark yet uplifting fantasy based on Otfried Preussler's novel of the same name, a best-seller that has sold over 1.8 million copies worldwide and translated into more than 30 languages. Directed by Marco Kreuzpaintner (Summer Storm, Trade) and starring Daniel Brühl (Goodbye, Lenin!, The Bourne Ultimatum, The Edukators). Both director Marco Kreuzpaintner and lead actor Daniel Brühl will be attending the festival.

Accompanying Krabat on the Sprockets Family Zone are the following titles:

Mia et le Migou—Jacques-Rémy Girerd, France/Italy. When her father becomes trapped in a tunnel on a construction site far from home, Mia decides to leave her village to look for him. Trekking through the vast and mysterious forest, Mia finds herself face-to-face with the Migou, a large, unusual species charged with protecting a powerful and important tree—a tree threatened by the same construction site that has endangered the life of her father. Featuring exquisite painterly animation, Mia et le Migou weaves a message of environmental responsibility into an imaginative world filled with fantastic creatures and one brave little girl. Animation, French with English subtitles, ecommended for ages nine and up. World Premiere.

The Secret of Moonacre—Gabor Csupo, United Kingdom/Hungary/France. Thirteen-year-old orphan Maria Merryweather is sent away to live with her uncle, Sir Benjamin, in the mysterious Moonacre Manor. There Maria uncovers the dark truth about the ancient curse that has nourished a destructive feud for centuries. She must find a set of magical pearls before the next full moon to undo the curse and save Moonacre Valley from disaster. Aided by a stable of wonderful characters and fantastical beasts, Maria sets out to bring peace to this magical world. Based on the acclaimed book The Little White Horse, The Secret of Moonacre stars Ioan Gruffudd, Tim Curry, Natascha McElhone, Juliet Stevenson and Dakota Blue Richards. Live action, English, recommended for ages eight and up. World Premiere.

Sunshine Barry & the Disco Worms (Disco ormene)—Thomas Borch Nielsen, Denmark/Germany. It's not easy being Barry. An earthworm gets no respect. He's at the bottom of the food chain, with a dead-end job at the compost plant. Barry's lot is a dull, dark existence. But one day an old disco record turns his life upside down. Barry suddenly sees the light: he will star in the world's greatest disco band, Sunshine Barry & the Disco Worms, and play that funky music to stardom. True, he's got no rhythm, no band and no arms, but, as Barry says, "We'll do it anyway!" Animation, English, recommended for ages seven and up. World Premiere.