MARDI GRAS: MADE IN CHINA 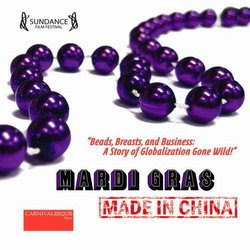 For an allegedly Christian country, the United States seems to have forgotten the lesson of Eve's apple, which is not only that Edenic ignorance is bliss; but, that consciousness is a painful but necessary act that leads to hard work. Foisting that hard work on others in an effort to regain the bliss of the Garden is not only hypocritical but misses the point of conscious discernment altogether; which is as serviceable a definition of globalization as any. In his first film, Mardi Gras: Made in China, David Redmon infers that the flip side of prideful excess is shameful impoverishment. Inference, in style, is his editorial strategy and it works—at least in part—by an astute focus on something as simple as following a string of party beads from the Chinese factory where they're produced to the Bourbon Street revelry where they're thrown away. Through such a simple premise, Redmon stares unflinchingly into the frightening face of complex socio-economic processes, providing obvious answers that provoke even more probing questions. Not only does his documentary expose exasperating facts; but, Mardi Gras: Made in China exasperates further for revealing no ready solutions. Then again, the Biblical injunction is that mankind has to toil for its consciousness. Let the work begin. 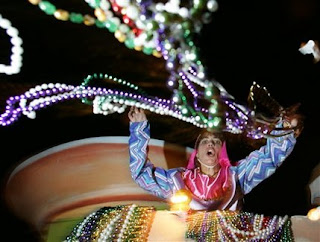 I missed Mardi Gras on its original roundelay and am thus quite appreciative that Redmon's distribution company Carnivalesque Films was willing to forward the recently-released DVD. It's a valuable film to own—not only for the initial emotional agitation it induces—but, because it is full of intertitular information that warrants repeated viewing and studious argument. The DVD also contains post-Katrina bonus features, including deleted scenes and a worker's diary. I also heartily recommend James Van Maanen's recent Greencine interview with Redmon, which provides insight into the energized naïvete that motivated Redmon to learn about filmmaking by making a film. Imagine! His heart is clearly in the right place. 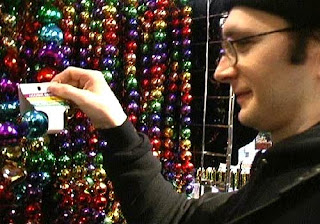 The film's official website does a comprehensive job of providing a critical overview, especially favorable reviews, so there's really no need for me to repeat the film's well-deserved praise; but, likewise, some of the film's detractors do Redmon's theme an important service by questioning his thesis and methodology. For example, I found the pointed criticisms of Haro Online particularly pertinent, especially his assessment that Redmon's inspired examination of the draconian working conditions at the Tai Kuen Bead Factory "deserves attention", whereas his protracted focus on the partying in New Orleans weakened the film's overall thrust because asking people on the street, especially drunk people, never yields great results. It only served to—as some critics put it—kill the buzz. More importantly, in its original theatrical distribution, Redmon's decision to repeatedly show the act of women exposing their breasts (without pixelating them) belied a voyeurism that prevented the film from being potentially instructive in an educational setting. Showing the burnt fingers of one of the factory workers was profoundly effective; whereas repeatedly showing drunken women flashing their breasts was less so. It's heartening and commendable that the DVD features a PG version to rectify this initial shortsight. 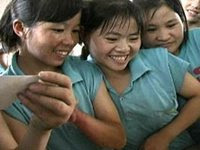 At The Boston Globe Janice Page likewise complained: "Redmon is attracted to this tale because it exploits an obscene and visually titillating gulf between the haves and the have-nots." So how then to circumvent such apparent titillation to arrive at a working solution? Or—as Slant's Ed Gonzalez poses the question—"Is there a way of significantly offsetting the problem of globalization or is its engine of power—fueled by a profiteering trade of commodities and labor that's been stewing and building to a boil since time immemorial—too hot to tamper with?" To Redmon's credit, Gonzalez continues, "the documentary understands our differing cost of livings and the scarce opportunities afforded to people without educations, and as such doesn't naïvely advocate that we stop consuming products acquired by third world countries under shady circumstances." As Matt Cale states relatedly at Ruthless Reviews: "It's the dilemma we face: the desire to treat the world's workers with dignity and respect, with the simultaneous recognition that idealism, for all of its virtues, can also destroy economies."

By raising these questions, Mardi Gras: Made in China "practices politics"—as Robert Koehler writes at Cinema Scope—"Watching it, in fact, is a political act." Then again, so is the very real work of consciousness. Kudos to David Redmon for reminding us of that human inheritance.