STREETS OF NO RETURN: THE UNFAITHFUL—Introductory Remarks By Steve Seid and Noir Historian Dan Hodges 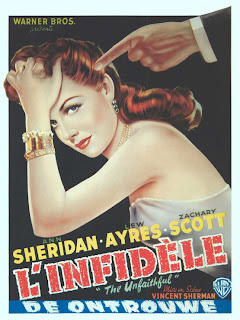 PFA curator Steve Seid reiterated that David Goodis—in the wake of the 1947 film adaptation of his novel Dark Passage—quickly secured a contract as a studio writer in Hollywood; but, had a rapid downfall and by 1950 moved back to Philadelphia. "The irony is that you can see in a single double-bill the entire output from his time in Los Angeles," Seid quipped. Other filmic adaptations like Jacques Tourneur's Nightfall eventually lead Goodis's work back to Hollywood; but, not the author himself.

Seid then introduced Dan Hodges, a San Franciscan author specializing in film noir, whose work will be included in the forthcoming 4th Edition of Film Noir: An Encyclopedic Reference to the American Style. Hodges is also a key figure in the San Franciscan film noir salon The Danger & Despair Knitting Circle.

Hodges remarked on Vincent Sherman's The Unfaithful (1947) by reading prepared notes: "The wind steps through the window and sat next to me. David Goodis didn't write that, but a characteristic of his style was to describe something inanimate behaving as if it were alive. In The Unfaithful there's a splendid example of this in a sentence spoken by Eve Arden. 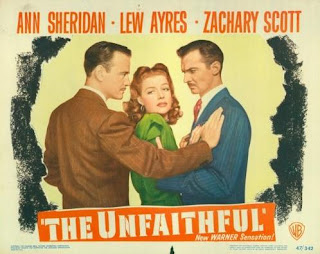 "Once you see The Unfaithful, I urge you to watch The Letter starring Bette Davis released in 1940, which you can rent on DVD. The Unfaithful shares similarities with The Letter but the contrasts are more striking. For example, I find Ann Sheridan is a more noir character because she's in a more noir situation than Bette Davis, given that Ann Sheridan's plight is more undeserving. Also, in The Letter the society in the South Pacific rubber plantation—as represented through marriages—is very cohesive; but, in The Unfaithful, society—in terms of marriages—is unstable, splintering, and so more noir.

"In The Unfaithful—and here, too, it's different than The Letter—Ann Sheridan is a woman in distress who is unique in film noir. She is not threatened with losing her sanity like Ingrid Bergman in Gaslight, nor with losing her life like Bergman in Notorious. Instead, she may lose her husband. Her marriage may fail like everyone else's. Both The Unfaithful and The Letter are notable examples of the kind of film noir that challenges standard academic as well as popular descriptions of film noir. For decades the terms and concepts that have been most frequently used to define film noir have not, in fact, been applicable to many many movies that are included in the various film noir encyclopedias, which contain The Letter, Gaslight, Notorious and The Unfaithful.

"The film noirs that have gotten short shrift are women's pictures, which are likely to take place in a home and deal with a romantic crisis; the so-called tear jerkers or hankies or weepies. However, during the classic years of film noir, especially in the 1940s, less so in the 1950s, many women's pictures are crime pictures that have the characteristics of noir visual style, although they aren't represented at all in the books that describe film noir….

"Women's noirs have been ignored because the mass media and academic descriptions of film noir only deal with the hardboiled. As a result, film noir is reduced to these kinds of essentials: the protagonist is male (an investigator, a criminal, a victim of circumstance); the literary source is hardboiled fiction; there is brutal violence like fists and guns; the time and place is a contemporary U.S. city, not—say—Victorian London or a family's home. This standard view of film noir ignores the published stories, novels and plays that primarily address the female audience and were adapted into film noirs. The Letter, for example, is based on a novel by W. Someset Maughm….

"It is critical to assess the full range of film noirs that were released between 1940 and 1959 if we wish to understand the full range of political and social issues that film noir addresses; take, for example, women's sexuality. With the femme fatale we talk about the threat to the man right then and there in the story and we relate that to men returning from WWII who are confronted with women who have become more economically independent through their jobs during the war and more sexually, say, independent, even aggressive. But women's noirs also raise issues about women's sexuality that are at least as interesting as those related to femme fatales and their male victims in men's noirs. For example, the plot in The Unfaithful has a lot more to do with the tension inbetween sexes in the post-war years because of issues of sex than just about any hardboiled film noir.

"Finally, until women's film noirs are properly recognized, a comprehensive history and a balanced analysis of film noir will be, by definition, impossible."

* * *
Dan Hodges's earnest plea for gender parity in a definitional appreciation of film noir is well-taken. I note that at IMdb there is not a single external critical review listed for The Unfaithful, though there are several appreciative user comments. There's a brief blurb at Wikipedia. Turner Classic Movies rallies at their database with a more substantive synopsis and an aggregate of news items, particularly interesting for their assessment of MPAA standards at the time: "On January 24, 1947, Los Angeles Daily News reported that although Ann Sheridan plays an adultress who is not punished, as the Production Code demands, the MPAA agreed to allow this if the film clearly conveyed the message that divorce is undesirable."

I found The Unfaithful surprisingly absorbing and thoroughly entertaining, largely due to Ann Sheridan's sultry duplicity, and because Eve Arden is one of my favorite character actresses, firing sharp bon mots right and left in this script, all as perfectly timed as a quick slap to the face. Steven Garay as an obsequeious blackmailing antiques dealer likewise offers a fine supporting turn. Zachary Scott, as Sheridan's husband, flaunts his masculine entitlements sufficiently enough, though he comes off more bitchy than betrayed in the film's final confrontations. During the film's trial sequence, Lew Ayres as counsel Larry Hannaford delivers a compassionate closing argument that—as Hodges pointed out—intriguingly indicts the social expectations placed on women left alone on the homefront during WWII.