2007 SFAFF—Genghis Khan: To the Ends Of Earth and Sea 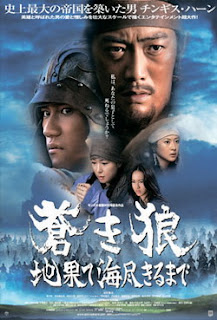 The opening night feature for the 10th annual San Francisco Asian Film Festival ("SFAFF") was the North American premiere of Shinichiro Sawai's Aoki Ôkami: chi hate umi tsukiru made (Genghis Khan: To the Ends Of Earth and Sea, 2007). Per the SFAFF program:

"Having topped the box office in Japan, this $30m Japan-Mongolian co-production, directed by Shinichiro Sawai (W's Tragedy), tells the story of the vast ambitions and indomitable spirit of Genghis Khan and employed thousands of extras to stunningly recreate the spectacular battles and military feats of Genghis Khan. Beautifully shot over a period of four months on location in Mongolia, this is one epic surely not to be missed on the big screen."

And that's exactly right. Though Todd Brown at Twitch announced the film's September DVD release, its mammoth battle sequences set in immense Mongolian landscapes impresses best on 35mm. In one such sequence 5,000 Mongolian Army soldiers appear, with over 27,000 people mounted as extras. There is a sensorial difference from watching such sequences digitalized. I'm grateful to Frank Lee, director of the SFAFF, for providing SF audiences the opportunity to experience the film as intended on the Castro Theatre's big screen. It's doubtful the film will achieve distribution, as all anticipatory energy is currently funneling towards the release of Mongol. 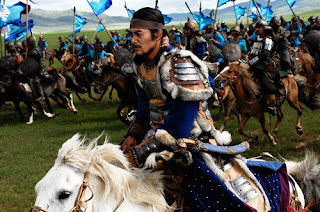 Channeling Gom's frequent reminders, the screenplay for Genghis Khan: To the Ends of the Earth and Sea was written by Takehiro Nakajima and Shôichi Maruyama, based on the historical-fiction books Chi hate umi tsukiru made: shôsetsu Chingisu Hân (ue) and Chi hate umi tsukiru made: shôsetsu Chingisu Hân (shita) by Seiichi Morimura. The movie stars Takashi Sorimachi as Genghis Khan (Chingisu Hân), though more accurately as Temujin (before he earned the title of Genghis Khan). The film belabors a humanization of the infamous icon, granting him more sentiment than is perhaps believable, highlighting his doubts over the secret of his birth, facing conflict and betrayal by his sworn friend Jamuqa (Yusuke Hirayama), and his mixed feeling of love and hatred for his son Jochi (Ken'ichi Matsuyama) who bears the same burden. Legitimacy to lead the Mongol hordes is gleaned from mythic antecedents, namely the Blue Wolf (the true translation of Aoki Ôkami), which is as good as any metaphor I guess to prove that might is right, especially among conflicting clans. In other words—despite his many military victories—this film depicts a kinder, gentler Genghis Khan than you might expect, who—empathically suffering the shame of the rape of his mother and wife by enemy forces—swears his hordes will never rape another woman again. Right. Generally shaping his portrayal of Genghis Khan as stoic, taciturn, patient and strong, Takashi Sorimachi gets to let it rip and chew up the scenery towards film's end, inducing laughter on my part in response to this over-the-top melodrama. Though I have to admit I did enjoy the film's final image of thundering hordes of Mongols charging against the Great Wall of China.

Further, one of the things that most intrigued me about this project is its unabashed use of ethnic masquerade with Japanese actors speaking in Japanese portraying Mongols. To the American ear, one Asian language is the same as the next so it hardly matters; but, to the Japanese, it undoubtedly carries a unique spectatorial pleasure, accounting perhaps for its box office success? I'm not really complaining. How can I? Here in the U.S., for God's sake, we cast John Wayne as Temujin (later Genghis Khan) in The Conqueror (1956), perhaps one of the funniest historical epics ever filmed. Let me know when that comes to the Castro.