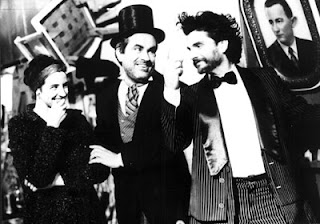 As an impeccable launch to Global Lens 2007, GFI director Susan Weeks Coulter hosted an outdoor screening of Margarette's Feast at her Pacific Heights mansion. Underneath perhaps the oldest magnolia tree I have ever seen, we bundled up in Susan's outdoor theatre, gobbled down delicious burgers, and weathered an earthquake tremble. This is why I write about film: to experience such unique and privileged spectatorial moments. This is surely an evening I will never forget.

Some of you might know that I am on the Board of Directors for the Global Film Initiative and that I will be introducing this year's crop of films at the Roxie Film Center where they are screening this week. I encourage you to catch these screenings—not only because I will be introducing them—but because these will be the only 35mm screenings of Global Lens 2007 in San Francisco. It's curious but true that 35mm screenings are becoming rare events so enjoy yourself; it's later than you think.

Margarette's Feast—a Brazilian black and white, surreal and silent comedy directed by Renato Falcão—was part of the Global Lens 2003-2004 lineup and I was thoroughly delighted to have had the opportunity to watch it projected. Margarette's Feast won Rodrigo Lopez the Candango Trophy for Best Art Direction and Falcão a Special Jury Award for New Director at the 2002 Brazilia Festival of Brazilian Cinema. At Cine Cineará that same year it won Best Original Score for Hique Gomez, who likewise portrays the film's protagonist. And in 2003 Renato Falcão was awarded the FIPRESCI prize at the Motovun Film Festival "for the way [Margarette's Feast] superbly updates the style of silent movies to show how Chaplin's Modern Times are still with us."

Variety's Deborah Young made the same comparison: "A silent movie harking back to the dawn of cinema and the socially critical comedies of Charlie Chaplin, Margarette's Feast cleverly uses just pantomime and music (not even titles) to tell how a penniless husband manages to throw a wonderful birthday party for his beloved wife. In his first feature, helmer/lenser Renato Falcao skillfully mimics the underlit photography and cluttered frames of silent movies, while updating the rhythm to modern tastes through editing and music."

Hique Gomez's score is invigorating; a character itself among the cast. Along with more recent fare like The Man From London and A Country For Old Men, Margarette's Feast is an allegorical and entertaining cautionary tale against the fantasies induced and capsized by a valise filled with a seemingly endless supply of money.