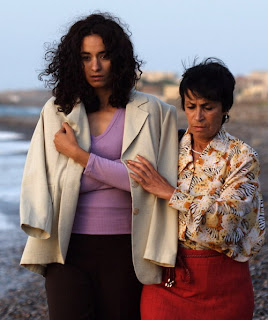 Winner of Best Original Score, Best Screenplay, and the Oumarou Ganda Award for Best First Work at the 2006 Ouagadougou Panafrican Film and Television Festival (FESPACO), Sahraoui's victory was all the more noteworthy because Enough! was the only film of the 20 considered produced by a woman.

As Nathan Southern synopsizes for All Movie Guide: "Algerian director Djamila Sahraoui's sobering drama Barakat! chronicles the plight of Amel, an emergency physician living and working in a small town hospital on the Algerian coast, during that nation's blood-soaked civil war in 1990. One evening, Amel returns home to discover that her husband has vanished without a trace. Inferring that he was abducted and taken underground by a group of militant Islamic terrorists, Amel confronts the authorities but is promptly snubbed and given the runaround. Refusing to be deterred, Amel vows to head for the war-torn surrounding foothills and locate the man herself. An older woman who lives nearby, Khadidja, once fought for Algerian independence against the French as a young girl; she insists on joining Amel. Though the women discover massive differences between themselves in outlook, politic, and breadth of experience, they quickly realize that they need to stick together and resolve minor disagreements if they are to confront the enemy successfully." 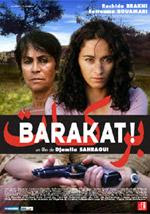 In conversation with French journalist Pierre Grise, Djamila Sahraoui stated: "In my film, from the beginning, I did not want to show imprisoned, subservient women, as one sees so often in Algerian films, unrealistic heroines who deny themselves in the name of history. I wanted to portray women who are in motion—and of course this motion influenced the film's form. These women make their way in life without ever pitying themselves or arousing the audience's pity. They move forward despite all obstacles. They move forward, whatever happens. And they never return to the place they set out from."

In fact, Sahraoui would argue her film is not a "road movie" as might initially be considered, but "an odyssey" wherein a long trip is taken before returning home. The journey of these two women—Amel and Khadidja—traces a complete circle, from their village of Ain Sbaa, up the mountain road, and through the fields and forests, villages and highways that lead back down toward the sea. Though their primary goal may remain frustrated, they achieve mutual respect and increased self-awareness. 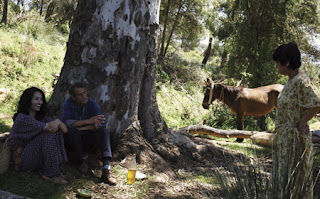 As the GFI website synopsizes: "Both women represent anachronisms in Islamist Algeria: the younger woman is a doctor, the older a nurse with vivid memories of Algeria's fight for independence. Ignoring curfews and the constant threat of ambush by armed militias, the two women challenge the men they encounter to accept them and help them with their search." It's exactly this point Cathleen Rountree picks up in her survey "The Hidden Half: Images of Women in Middle Eastern Cinema" when she praises the reflections of the two women as they confront contemporary religious limitations imposed on females.

As Variety's Eddie Cockrell observes, Enough! is bolstered by Rachida Brakni's performance as Amel, whose determination to find her husband provides the "resolute center" of the film and whose "tangible chemistry" with Fettouma Boumari's Khadidja counters the film's plaintive leisure with a sharp, poignant edge.