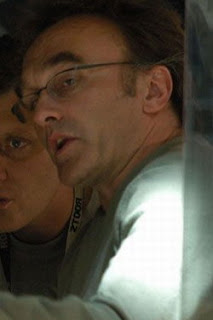 I'll defer to earlier write-ups on Danny Boyle's Sunshine by Twitch teammates Mack and Swarez and dive right into an interview I conducted with Boyle earlier this week regarding the (seemingly belated) release of Sunshine in the United States. We met in his suite at the Mark Hopkins and he was charmingly forthcoming. Not for the spoiler-wary.

* * *
Michael Guillén: You haven't been afraid in the past to tweak a genre. You reinterpreted the zombie flick with 28 Days Later when you transposed the characteristic stumbling, shuffle-footed zombie into raging racers. What struck me with Sunshine was likewise its pace. Can you speak to how you determine the pace of your films?—fast and furious in 28 Days Later but much more brooding in Sunshine—how was that determined? 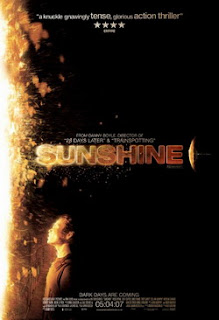 Danny Boyle: [A space film] doesn't work if you don't do them like that. I tried to cut it quick; it doesn't work. [In] space, it doesn't work. It's one of the rules that you learn. It just doesn't work. I saw a Ridley Scott interview when they re-released Alien a couple of years ago for its 25th anniversary. He said, "I don't think it would work now if you released it because the first 40 minutes are so slow." I have to say I disagree with him. My feeling is it wouldn't work if you recut Alien and speeded it up for the modern attention-deficient audience. To create the reality of space, there's this sense of suspension, nothing's happening, it's endless; we're traveling at 27-28,000 kilometers an hour but nothing's happening, nothing. You have to do that. There are all these rules that you have to follow. I've never known anything like it. You mentioned 28 Days Later, that zombie genre you would think is much narrower; but, actually, it's a complete open field. You can do anything you like really. This is absolutely disciplined. It's Zen. You have to be focused in an area. You have to zone into an area and then you can achieve when you get there. It's weird.

No director goes back into space. It's the ultimate experience making [a space movie], I think. Maybe a modern day musical is as tough. I'm never done anything like it, certainly. But I loved doing it. I fell out with a lot of people because you have to be pretty tough on your crew to get there, y'know?

Guillén: So who was your editor? How do you work with your editor to achieve that pacing?

Boyle: Well it's the same guy Chris Gill who edited 28 Days Later. The material dictates itself. The way you shoot it, it dictates itself. We tried cutting it in a slightly different way—because I was aware that the beginning is quite slow—and it just didn't work, it just doesn't work. I think it is the discipline of space. Maybe more pop fantasy films you can speed up like Star Wars or whatever but this kind of film, this hardcore eight-people-in-a-steel-tube fired out into the endless eternity of space, basically works at this pace.

Guillén: What I sense is a mythic gradient to the pace of the film because you are dealing with an encounter with the ineffable. I'm a Mayan epigrapher by training and there is a Mayan glyph which is the verb "to witness." Basically what it is when you look at the glyph is it's a sideways view of an eyeball. One of the presiding images of your film is the sideways view of an eyeball with solar flares reflected in it. Can you speak about what witnessing means in this film in pursuing the theme of encounter?

Boyle: The biggest "fakedom" of the film—but the most important thing about the film—is that there's a room that they can sit in that allows them to see the star as they approach it. [Laughs.] In retrospect, NASA would never give them that room. Although psychologically you think it's good to look out the window, it's a recipe for disaster to witness this thing, for ineffectiveness, for realizing how meaningless [humans] are compared to this growing globe as they draw closer to it. But it was the drama really—it was all the drama—to be able to have that room and to have them witness it and to have the significant events that happen in the film happen in that room really, where they witness Mercury. The most important thing ultimately is that [Capa (Cillian Murphy)] witnesses Pinbacker (Mark Strong). That scene where [Capa] comes in and Pinbacker is burning himself in front of the sun—I don't think people get this from the film, which is of course the fault of the film—but the whole idea of Pinbacker is that he was a challenge. It's not so much what is Pinbacker—obviously he represents fundamentalism—but it's really a challenge to [Capa's] sanity, which is of course what it would be to go out there. Do you keep your sanity? Is it possible for someone for seven years to have burnt themselves and still speak like a human being? How is this possible? That's the key. And that's why that scene is played out in that room. [Capa] tries to touch him and [Pinbacker recoils] because there's no touch of course. He's not human anymore in a way. He's the Taliban—or whatever—but that's crucial to it.

The eyeball we use, the interesting thing about the eyeball is that when you get like that, all eyeballs are interchangeable. It's absolutely incredible. It doesn't matter what race they are. One of the eyeballs that's used is the Japanese guy's eyeball. One of them's Cillian's. We just mix them about.

Guillén: Which is to say that witnessing is universal.

Boyle: Absolutely, yeah. I like that you can mix them up and nobody can tell whose eyeball was whose. That tells you all you need to know about it all, doesn't it? We're all in this. That's what I love about space. Apart from that little blip where Reagan wanted to have a Star Wars up there, [space travel has] always been on behalf of mankind. Everything that we've done so far has been done on behalf of mankind, which is one of the few times we've ever achieved that in any of our history and I hope and I pray that that continues, that it's not divided up.

Guillén: Human flaws do seem to be the pivotal plot points in this film.

Guillén: Returning to Pinbacker, how did you come up with your visualization of him?—this strange, blurring image—what was that all about? And how did he get on the ship? I have to be honest, I didn't understand how he got on the ship. 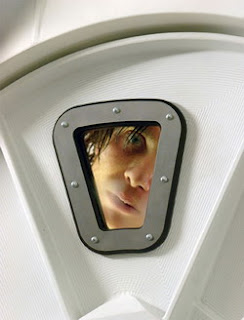 Boyle: It's obvious. I can't believe people say that. We haven't explained it enough clearly because you're not the first person to say that. If you watch it again, it's very obvious where he gets on the ship, I think, where he switches ships. I can't explain that any more. It is in the film where he switches ships. We did visualize it at one point. We did show him switching ships; but, again, I didn't want that because I didn't want any manifestation of him until [Capa] walks into that room and witnesses him. It's when the ships join and they go on to the other ship and then the ships get separated. He has mechanically separated the ships. He has switched ships, thereby abandoning all four of them and leaving himself on the ship with three other people so he can stop this mission as well. He knows his mission was stopped; it's not going to go on any further. So he goes onto the other ship and he's going to stop that mission as well. Because he believes that science is wrong. He's basically the Taliban, isn't he? Because apart from the Taliban, the rest of us believe in science. We believe we can improve our lives. We believe we can innoculate. We believe that science can extend life. If nature threatens us, if smallpox threatens us—whatever it is—we can protect ourselves. The whole film is about that belief apart from him.

Why we visualized him like that is because of what I said before about witnessing. It's very difficult to say when somebody has lived out there for that long, it's not possible but who knows what's possible? We've discovered extraordinary things. So I wanted him to be spectral, but not like a ghost. He's literally like the bits that make him up—the protons and neutrons that make us all up—have kind of reorganized in some way.

Boyle: Your electrons, your protons, your neutrons, your atoms are empty basically, aren't they? They make you up but we know most of it is just empty space. So there's nothing there really. What gives you this shape? Nothing really. It's an illusion. And we just wanted to shift those about a bit so we used this rig on the camera that blurred the image and it's completely organic because you can't do it the same twice. Because it's a guy in front of the camera with this lens and—depending on how the actor moves or how the light hits him—it's an amazing, weird process.

I enjoyed the interview a lot since Boyle is one of my favorite filmmakers of the past 15 years or so.

Thank you, Kimberly, for your kind comment. I too find Boyle quite an interesting filmmaker--I have since Shallow Grave--though he was the first to admit that film fans interested in directors are a slim sliver. It's the actors people come to see, he said.

I am a big fan of space films and really enjoyed this movie, but there is something really strange I discovered and am confused.

I don't know if this is a joke or some bad editing error, but during the film (atleast the one I have), when the crew is boarding Icarus II, right when they enter the doorway they shine some lights into the ship.

There are 3 flashes that sort of go right into the view of the camera. On the second flash, for a very very very small amount of time, it shows a picture of some guy with something red and white around him.

The picture is old and not good quality. It happened so fast I didn't notice it the first time I watched it and was pretty hard to pinpoint.

I don't know what to think of it.

Wanderer, that was a picture of Pinbacker from the Icarus 1 photo...I believe this is what Boyle is talking about in the article when he says he can't explain it any further. It is obvious this is where Pinbacker gets on the ship!