IDAHOMOS UNITE!!—Frameline At the Center Screening of The Fall of '55 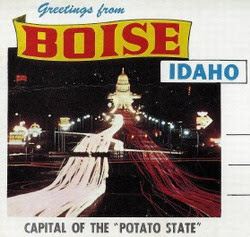 We're baaaaaack! Did you miss us? I've been in Oregon attending to family matters. Included on the itinerary, however, was a stopover in Boise, Idaho, where filmmaker Seth Randal (The Fall of '55) graciously introduced me to Alan Virta, historian to the film project. Virta—Head of Special Collections and University Archivist at Boise State University's Albertsons Library—invited me to his home for dinner and his slideshow presentation of his research into Idaho's gay history. This was an honor, an illumination and a delight as his presentation for me was full of fascinating asides he normally doesn't share with his audiences. Dreaming in detail, I hope to eventually bring Virta's informative slideshow to the Bay Area in the near future. With Randal's documentary to pave the way, I believe San Francisco's queer community would appreciate an amplified glimpse into Idaho's gay history. Further, there's a case to be made for an Idaho-San Francisco axis, extending back not only to the events of the Fall of '55 but right into the Castro Flourescence of the 1970s.

After the slideshow, Alan and Seth took me downtown Boise to visit the scene of the crime profiled in The Fall of '55. Pointing out the Ada County Courthouse with its holding cells on the top floor, the police station and the former offices of The Idaho Statesman, Alan and Seth made history visceral; an experience for which I will be forever grateful.

Let this serve as a reminder as well that The Fall of '55—picked up by Frameline Distribution (congratulations, Seth!)—will be screened this evening Thursday, July 12, as part of Frameline's "At the Center" free screenings. San Francisco's LGBT Community Center is located at 1800 Market Street; the free screening of The Fall of '55 is at 7:30PM.

08/01/07 UPDATE: While I was in Boise, Seth--aware that I would have the opportunity--asked if I wouldn't ask John Waters the following question:

Michael Guillén: I'm an Idahomo. At the end of Pink Flamingos, Divine goes to Boise. Where did that reference come from?

John Waters: I know definitely where that came from. There was a big scandal there and a book about it called The Boys of Boise, which was when a lot of married men were busted in a men's room or something and then they all committed suicide. It was a big national story. That's where that's from, that book The Boys of Boise. To this day I think there's one little theater in Boise where my movies play and the distributor always says, "I don't know why they ever book it." And it does okay there and that's why, I think, because there are a few people left in Boise that think Divine's still coming there. That's where they were going to relocate at the end to be the filthiest people in the world.
Posted by Michael Guillen at 7/12/2007 12:47:00 PM