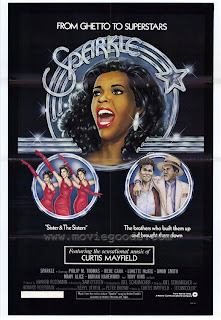 When I first announced the program line-up for the Fabulous Fashion in Film Festival, I commented: "Leave it to [Marc] Huestis to program the obvious double-bill of the year: Sparkle (1976) and Dreamgirls (2006)." My Evening Class cohort Michael Hawley concurs and offers an overview of one of his supremely guilty pleasures.


His mix of enthusiasm and outrage is not for the spoiler-wary.

* * *
The best thing I can say about 2006's film version of Dreamgirls is that it triggered, at long last, the DVD release of 1976's Sparkle. For 30 years, this film has been a supremely guilty pleasure for me. This was the first movie I ever purchased on VHS—way back in 1984—and I've watched it a zillion times. On Thursday, August 2, as part of his Fabulous Fashion in Film Festival, San Francisco impresario Marc Huestis presents the inevitable double bill of Dreamgirls and Sparkle at the Castro Theater. To the best of my knowledge, this is the first time Sparkle is being shown on a Bay Area big screen in more than two decades. 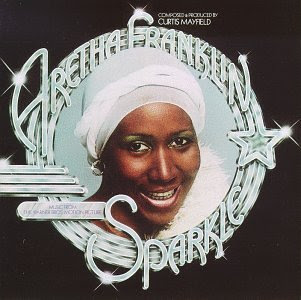 Sparkle was released in the spring of 1976, just months after I had moved to San Francisco. As a budding cinephile I was too busy catching up on my Herzogs and Fassbinders to bother with a poorly reviewed blaxploitation film that—if I remember correctly—only screened at that Market Street sleaze palace known as the St. Francis Theater. While oblivious to the film, I was positively obsessed by its so-called soundtrack album, in which Aretha Franklin sang five Curtis Mayfield-penned tunes from the film and an additional three that were not included. It's a "so-called" soundtrack because Aretha is never heard singing in the movie, and to this day a proper soundtrack featuring the film's actors has never been released. Anyway, the album more or less became my personal soundtrack for 1976 and it remains, along with Young, Gifted and Black, one of Aretha's two great studio albums from the 1970s. 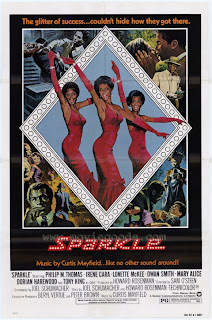 I finally saw Sparkle in early 1977 on a double bill with A Star is Born (1976) at the Castro Theater. At that time, the Castro was still very much a nabe theater, showing films whose downtown run had ended. A Star is Born had been the big Xmas picture of 1976 and as a gay boy I suppose I felt it my (reluctant) duty to check out Barbra's remake of a remake. Seeing Sparkle was an afterthought, born mostly out of a desire to get my movie money's worth. Long story short, the loathsome A Star is Born made me want to kill myself, and Sparkle made me so deliriously happy I wanted to swing from the Castro chandelier. I'm not sure what I was expecting from this story of three Harlem sisters who form a singing group in the late 1950's, but a heartfelt, campy, corny, fabulous soap opera of a musical wasn't it. The icing on the cake was hearing Lonette McKee and Irene Cara's sultry and languid renderings of Mayfield's songs, in deep contrast to Aretha's ferocious exuberance. I returned two more times during the film's Castro run, and then saw the film a time or two more at the Strand Theater, during the years of its repertory heyday. Soon thereafter came the VHS release, whose gradually degenerating, pan-and-scan images are all I've had to content myself with over the past two decades. 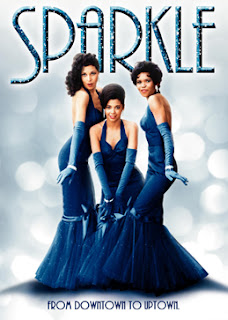 Since then, Sparkle has managed to build a considerable cult film following. If you don't believe me, check out the hundreds of message board posts on the film's IMdb page, where fans gush over their favorite songs and dialogue, and indulge in plot and character analysis worthy of Citizen Kane. Many of the posts are desperate pleas for a DVD release, which Warner Brothers finally took to heart when it finally issued Sparkle to coincide with the release of Dreamgirls. The resulting DVD—while better than a stick in the eye—is hardly the deluxe edition fans were hoping for. For starters, Warners didn't re-master the film. There are night scenes and club scenes so dark that characters in the shadows completely disappear. They also didn't re-master the soundtrack, retaining the flat mono of the original. The DVD was also the perfect opportunity to put together a recording of the true original soundtrack. Instead, we're given a five-song bonus CD of tracks from the Aretha album, which curiously includes one song not heard in the film ("Sparkle") and excludes the film's first song ("Jump"). There are no commentary tracks or interviews, even though nearly all of the film's talent is still with us. In fact, the DVD's only bonus feature is the theatrical trailer, narrated by Casey Kasem of all people. And finally, can someone please explain to me what in hell-nation is up with those blue fishtail gowns shown on the front and back covers? In the movie those dresses are as red as red can be, and I'm incredulous as to why this change was made (the result of some marketing survey, no doubt). 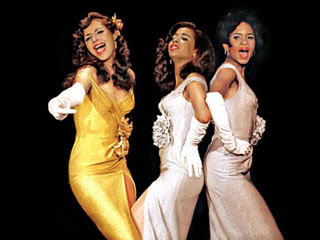 Part of the fun of watching Sparkle today is seeing certain actors early in their careers, before they moved on to bigger, if not necessarily better things. There's Irene Cara as the youngest sister, Sparkle, four years before Fame, and Philip Michael Thomas as her romantic interest Stix, eight years before Miami Vice. The pair have a lovely on-screen chemistry together. Then there's Lonette McKee's screen debut as the hellbent-on-self-destruction, eldest sibling, Sister. If there were only one reason to see the film, her performance would be it. In fact, when her character dies two-thirds of the way through, the film kind of dies with her. McKee would go on to have a respectable career in TV and film, appearing in Round Midnight, The Cotton Club and a number of Spike Lee joints. The middle sister—righteous and socially conscious Delores—is played by Dwan Smith. The role is the most unfortunate one in the film, and Smith does her best despite having to recite such lines as (spoken to her mother, played by screen vet Mary Alice, as she's leaving home for good): "You don't understand Mama. Like there's education like there never was before. We don't have to be slaves to the white establishment anymore." Sparkle would do little for Smith's career, and her most recent IMdb listing is a 20-year-old appearance on General Hospital. 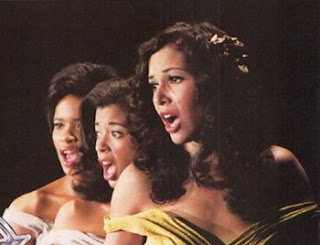 Much of the Sparkle crew would also go on to do better known projects, with the exception of the film's director, who already had a formidable filmography in place. Sam O'Steen is considered one of the great film editors of all time, and Sparkle would be the only theatrical feature he'd ever direct. Listen to this partial list of films he edited: Chinatown, Who's Afraid of Virginia Woolf?, The Graduate, Rosemary's Baby, Cool Hand Luke, Carnal Knowledge, Catch-22 and Silkwood. It's interesting to note that as Sparkle's director, he often favors long, lyrical, uninterrupted shots, such as the one that opens the film and introduces all the main characters. 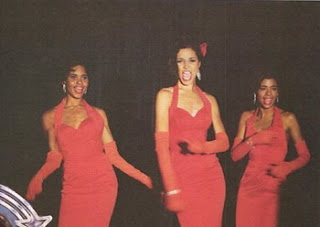 The film's story came from its producer Howard Rosenman, who would also go on to produce many fine documentaries by Rob Epstein and Jeffrey Friedman, such as Common Threads, The Celluloid Closet and Paragraph 175. The screenplay itself was written by Joel Schumacher, who later became a top Hollywood director in his own right, helming everything from The Incredible Shrinking Woman to The Lost Boys to two Batman movies. Cinematographer Bruce Surtees is perhaps best known for shooting virtually all of Clint Eastwood's output from the 1970s and 1980s, and choreographer Lester Wilson's next assignment after Sparkle would be Saturday Night Fever. 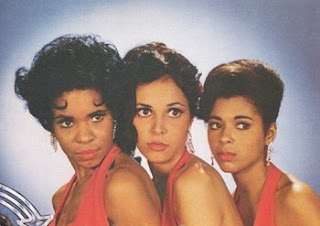 Which brings us to the reason for Sparkle's inclusion in this festival—the terrific costumes of Daniel Paredes. Besides the aforementioned fishtail gowns and other fabulous outfits worn in the musical production numbers, his period clothes are perfect in their authenticity. I was amazed to find Sparkle missing from his IMdb credits, and had the omission corrected. Sadly, Paredes would die of AIDS complications in 1993. Here are two clips from Sparkle that show off his creations. The first features the girls performing "Hooked On Your Love" at the Shan-Doo Club.

The second has them performing "Something He Can Feel", and is cut with scenes of Sister leaving home to take up with the no-good pusher/pimp who will drag her to the gutter. Check out those wild puss-print Capri pants!!!

dear mr. fabulous, thanks for giving 'sparkle' some well needed attn.
after reading an interesting review, i went on down to a bargain-ee at the strand on market street and was likely one of the handful of white girls in the audience although i didn't see any of the others...didn't matter in the least...the audience was so into the movie and we were all part of a mass exhileration that left us all smiles and energy as we walked out into the late s.f. afternoon.

at the time i was part of a musical performance group that went by the name of 'the pointless sisters'(three gals and a guy: bermuda schwartz (moi), short schwartz (4 ft.,22in.), anna mae ted schwartz (now living off planet) and our honorary "sister", jim schwartz (aka j. raoul brody and who forwarded me your link with the message "as if we don't have enough distractions.."). yee-ess, i grabbed my other sisters and we were back at the strand with a tape recorder by the next possible showing getting the songs and our favorite bits of dialogue. that movie was so fun and inspirational to us (not to mention lonette mckee's knock-out performance) that we worked up our own rendition of 'hooked on your love', which we incorporated into the act and performed many times with joy and gusto albeit our "white chicks wanting to be black girls" situation.
s.f. was a whole 'nother place back in the day...more fun than you could shake your stick at...rents were cheap and art flourished freely.
thanks again for bringing all back with your review. berdalee@kggvfm.org

Thanks for commenting, blee, and I'm glad you enjoyed being taken back to a time when San Francisco was, as you say, a whole 'nother place (when I saw SPARKLE in 1976 I was paying $175 a month for a beautifully furnished one-bedroom Victorian flat in the Haight). Sadly, the city I love has turned into a gentrified mondo-condo hell.

I do remember your group, The Pointless Sisters, and perhaps even caught your act at some point. But that was a very long time ago. And by the way, I'm sure you weren't the only one who snuck a tape recorder into a theater in order to record the original SPARKLE songs (wink wink).

I was recently writing piece on Sparkle for Juicy magazine and found this while doing research. Just wanted to say how much I loved this post.

Thank you, Michael. It's always gratifying when a piece that's been on the shelf for a while is appreciated by a brand new reader. Thanks for stopping by to comment.