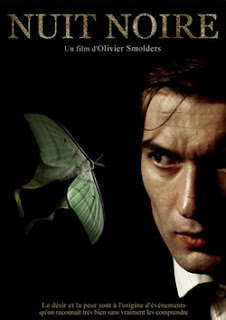 Todd Brown wrote quite fairly about Olivier Smolders's first feature Nuit Noire (Black Night) when he dispatched to Twitch from the 2006 Philadelphia Film Festival, admitting he had no clue whatsoever what the film's beautifully unsettling imagery meant; describing it as "thoroughly inscrutable on first viewing." Qualifying that inscrutability by the suggestion of further viewings implies the effort might be worth it, with which I would wholly concur. Grasping at descriptions like straws—"Surreal is one word for it. Dream-like, another. Pretentious is one many will apply, though I hesitate to go there myself before working at the puzzle a little longer."—Todd admits "pretentious" would only apply "if you don't have the goods to back it up. All indications are that Smolders does, it's just up to me to catch up." I respect that Todd does not pettily dismiss what he does not immediately understand.

Paraphrasing Jamake Highwater's The Primal Mind (1992:77): "Images are a means of celebrating mystery and not a manner of explaining it." This seems especially pertinent to the protean and essentially mysterious film at hand. Olivier Smolders himself has confessed: "Give me mystery to suspense any day." 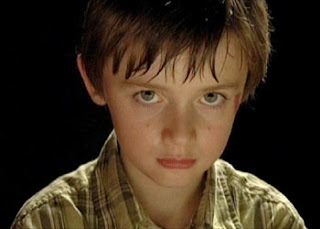 When adjectives don't provide a firm grasp, identifying kindred spirits might by a process of approximation and familiarization. David Lynch—specifically Eraserhead—comes immediately to mind with what I've already termed the "Lynchian Imperative" of staged weirdness. Terry Gilliam's Brazil has likewise been alluded to, as has the animated surrealities of Jan Svankmajer, the perverse puppetries of the Quay Brothers, the brooding synchronicities of Jean-Pierre Jeunet (particularly La Cité des enfants perdus), the labyrinthine manipulations of Alex Proyas' Dark City, and the stern concerns of Ingmar Bergman's Hour of the Wolf. Add a dash of Kafka's "The Metamorphasis" and you're well on your way to being thoroughly disturbed and creeped out, walking home alone in the dark.

When it comes to inscrutability, I've long felt that one must be content with the articulations that sideways glances and deflections achieve. An indirect approach is the only way I can assess Nuit Noire and recommend it to others. Of the screeners I've seen from this year's inaugural Dead Channels, it is by far the most intriguing and—dare I say it?—most accomplished of the films in the line-up. Where titles like The Trail of the Screaming Forehead, Trapped Ashes, and Gamera the Brave can be appreciated (however briefly) for the truly amateurish and frivolous bonbons they are, Nuit Noire requires attention, investment, and subsequent rumination. It's my kind of film and one of the best in the festival. It is at this stage the only screener I'm looking forward to watching on the big screen. That has everything to do with Louis-Philippe Capelle's lustrous cinematography. Cineuropa's J-M Vlaeminckx states the film's palette includes "every shade of gold, ochre and Sienna brown under the sun" achieved through digital high definition. Braced by the atmospheric score of Miam Monster Miam, Nuit Noire is a sensuous enthrallment. 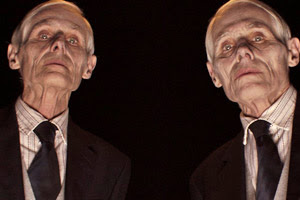 Synopsis, like resistance, seems futile; but notwithstanding: Nuit Noire is about night's enveloping embrace. It honors the sheen on a beetle's jet black carapace. Set in an alternate reality where the world has been plunged into darkness because of an eternal eclipse—which allows only a fleeting 15 seconds of sunshine in each 24-hour period—Nuit Noire inherits a night logic of surrealistically-interpreted dream images (twinning abounds) and purposely contaminated chronologies (trajectories bifurcate). Polarities are staged and layered one upon the other: darkness and light, black and white, youth and adulthood, male and female, sex and death, desire and fear, blood and milk, history and memory. Memory itself is configured as either a theatrically staged enactment replete with arched proscenium or cinematically captured in grainy black and white by a voyeuristic Super8 camera. As night watchman, Smolders flips a coin whose two sides spin endlessly throughout the film, glinting in dim light. Heads or tails, either way; it's the flip of the coin that truly matters. 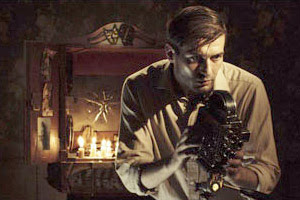 Handsome repressed protagonist Oscar (Fabrice Rodriguez) works obsessively as an entomologist in a Natural History Museum hauntingly pervaded by a taxidermic spirit. He delights a bit too much and gains a little too much purpose in chloroforming and pinning beetles to the page. He's also having trouble with traumatic childhood memories that involve the death of his younger sister but it's not quite clear if these "memories" aren't just his disturbed imaginings. He's undergoing Jeunet-esque therapy where the doctor looks into his mind through a cone in his ear. While awaiting recovery, the ghosts of his imagined yesteryear contaminate and readjust his daily life. One day at the museum he encounters an African woman who seems to whisper telepathically to him in an incommunicable language. Before he can make it home, she sneaks into his apartment evading his crazed Russian landlady, climbs into his bed, proceeds to become pregnant and eventually pupates. That's right, pupates. Need I add that being an experienced entomologist comes in quite handy at this juncture? As Variety's Derek Elley describes it: "What finally emerges from the pupa is supposedly linked to his own childhood memories of himself, his sister and white-hunter father in colonial Africa (seen in B&W home movie footage)—and sparks a longer spell of bright daylight outside." One might say consciousness is linked to daylight, as it has been in mythologies immemorial.

In his own extracted itinerary of the film, Smolders has written: "Nuit noire (Black Night) was born of the passion of the insect. The aim was to tell a story of metamorphoses in highly dreamlike fashion, accompanying an entomologist in the fictive representation of his own internal life. The film wouldn't show a man dreaming, but rather the dream itself unfolding. A dream cobbled together from a collection of diverse reminiscences, fairy tales, tales of fantasy and make-believe, macro photographs and colonial archives. 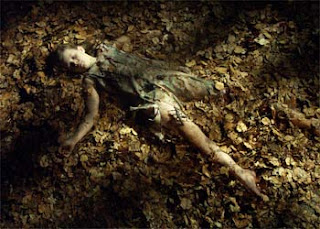 "Nuit noire was at first intended to be a film about audio-visual sensations. The narrative pretext, the trauma suffered by the main character, a story of mourning over the death of a little sister, had to be presented to the audience in deferred fashion, by the most improbable device it was possible to find. Throw in some elements of decor and a small cast. Interlace the guiding thread of the narrative pretext with other threads. A canvas slowly but surely unveils, its intersections tied with occasionally loose knots. In reality, events and characters had to be born of the more or less conscious fears and desires of the main character. That's why the series of episodes could be both very structured and random. I could quite easily see the film as the x-ray of a dream advancing by associations, by the contamination of elements that, although not easily discernible, were also susceptible to multiple meanings. Personally, I have always liked leaving myself at the mercy of stories I don't fully understand but whose composite parts do seem to draw on a vaguely worrying, subterranean causal logic." 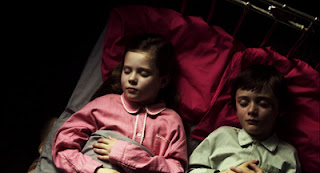 One might wish to pin down this movie as readily and enthusiastically as Oscar pins down the insects that he checks off his assignment list. Then again, revealing that wish might be the true aim of this movie, which purposely obfuscates, fragments, thwarts, distracts and detours at every nocturnal turn. To pin this movie down, to freeze frame it in the lens of a camera, is tantamount to chloroforming it. To recognize it as collage, as mosaic, as an exercise in Surrealist exquisite corpse, as self-indulgent and self-referential polysemy, is to be more on track. Quoting again from Smolders' La part de l'ombre (Share of the Shadow): "Sometimes, beetles that we hadn't effectively chloroformed woke up in the night, impaled on their pins, and spent hours going round in circles, making that annoying scratching-paw sound. In the morning, we put them out of their misery, not without feeling somewhat guilty about the whole thing. Nuit noire (Black Night) is first and foremost a film about insects and guilt."

I owe much to Cineuropa's interview with the director and encourage anyone interested in the folly of attempting to "understand" this film after (hopefully) watching it to explore said interview. As Todd phrased it, this is a man who has "the goods to back it up." 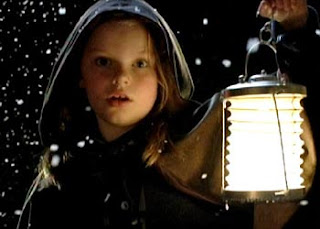 How did I miss this? I'm subscribed to Technorati and it's supposed to let me know when my favorite blogs are updated (like yours) but I swear it doesn't work half the time. I need to make time to figure how to use RSS Feeds properly.

This sounds really interesting and I love the images you posted! I've really been enjoying French horror and fantasy films made in the last 8-10 years or so. There really is some kind of amazing revival going on in that country that a lot of critics seem to be overlooking it. For instance I just watched Calvaire on DVD recently and it knocked my socks off. It was the best horror film I've seen all year.

When you learn how to do the RSS thing properly, teach me. I keep slipping on this learning curve.

I've been cautioned to differentiate between French and Belgian and so I feel a need to remind that Nuit Noire is a Belgian film, not French.

Notwithstanding, my Evening Class cohort wrote up Calvaire a while back and that can be found here. Heh. The Evening Class is something of a Chinese puzzle box, eh? Will you ever get out of here and on into your windy day?

I absolutely adored this film! which I watched two nights ago and I must say ehm... that I also found Fabrice Rodriguez absolutely gorgeous :)
The photography and narrative are so different to what�s available these days in blockbusters. Truly original.