It's easy to become overwhelmed by the wealth of film festivals that take place in the Bay Area each year. That's my flimsy excuse, at any rate, for having largely ignored the San Francisco Silent Film Festival ("SFSFF") for the first decade of its existence. Then last year I got smart and checked out four of their offerings. Two of them, Tod Browning's creep-fest The Unholy Three (1925) with Lon Chaney, and Julien Duvivier's department store drama Au Bonheur des Dames (1930), turned out to be among my most memorable film events of 2006, and now I'm hooked. The festival's 12th edition will take place from July 13 to 15 at the Castro Theater, and I’m planning to see a whopping eight out of eleven programs. I can think of worse ways of spending a weekend than sitting in America's premiere 1922 movie palace watching gorgeously restored 35mm prints of silent classics with live musical accompaniment. 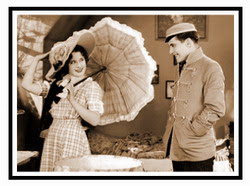 The festival kicks off on Friday night with Ernst Lubitsch's The Student Prince of Old Heidelberg (1927), starring Ramon Navarro and Norma Shearer. The film will be introduced by San Francisco Chronicle film critic Mick LaSalle, who has written extensively on Shearer. Unfortunately, I'm going to miss Opening Night due to a prior engagement, which is another way of saying I have to work that evening.

I'll also be missing the first program on Saturday morning, Hal Roach: King of Comedy. The program will consist of four fun-sounding, lesser-known shorts from Roach's studio, and will be introduced by Rob Stone of the UCLA Film & Television Archive and Leonard Maltin. The only reason I'm missing this program is because I expect to be up half the previous night attending the 10th Anniversary opening of Peaches Christ's Midnight Mass series at the Bridge Theater, with Mink Stole and Tura Satana live in person. Believe me, it was a tough choice! 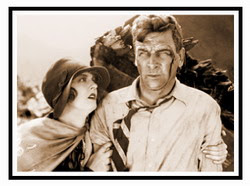 I should recover in time for the festival's early afternoon screening of The Valley of the Giants (1927), an adventure film set amongst the sequoias of Kings Canyon National Park. That will be followed by Maciste (1915), which was the first in a series of 26 Italian silent films that starred Bartolomeo Pagano as the titular superhuman strongman Maciste (a character he originally portrayed in the 1914 blockbuster Cabiria.) Early evening will bring one of the programs I'm most anticipating: Camille (1921) starring Rudolph Valentino/Alla Nazimova, which the festival promises, "just might be the most defiantly flamboyant art film to even come out of Hollywood." This program is a special tribute to Turner Classic Movies ("TCM"), and revered TCM on-screen host Robert Osborne will be there to introduce the screening. Finally, William A. Wellman's Beggars of Life (1928) will cap off the day. Louise Brooks, Wallace Beery and Richard Arlen star in this social drama of hobos and train hoppers, and the director's son, William Wellman Jr. is scheduled to make a guest appearance at the Castro that evening.

I'll be missing the morning program on Sunday, too, and once again Peaches Christ is to blame (director John Waters will be making his first-ever appearance at Midnight Mass the previous evening.) The program, More Amazing Tales From the Archives, does sound fascinating. First, Rob Stone will examine the need to preserve non-feature silent films such as trailers, newsreels and shorts. Then Patrick Loughney of the George Eastman House will take a look at the extinct format of 28mm films. Luckily, some of these 28mm films have been restored to 35mm and a different one will be screened before nearly every program in this year's festival. It's also nice to note that admission to this program is free.

Anyone who experienced French film archivist/archeologist/preservationist Serge Bromberg's "Treasures From A Chest" program at the 2001 San Francisco International Film Festival knows they're in for a treat with Retour de Flamme (Saved From the Flames). This new program of rarities from M. Bromberg's Lobster Films—which includes obscure works by film pioneer Georges Méliès—sounds like an excellent way for me to begin a second day of silent cinema. Bromberg is a charming raconteur and also provides sublime piano accompaniment to the films he shows. 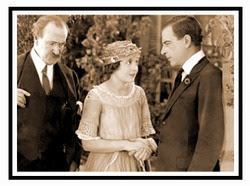 I was originally planning to skip the next program in order to go out and have a decent meal somewhere in the Castro. That was until I learned that Brian Darr, Bay Area film blogger extraordinaire, had chosen it as his film to profile in the festival catalogue. I trust Brian's taste and am now very much looking forward to seeing William Demille's Miss Lulu Bett (1921). This DeMille is best known as the older brother to famous sibling Cecil B., but he was a director in his own right and this is considered his best film. The following program, Anthony Asquith's British "psycho-noir," A Cottage on Dartmoor (1929), about a man's obsession for a manicurist, will be appropriately introduced by none other than the Film Noir Foundation's Eddie Muller.

Bringing this year's festival to a bombastic finish will be Cecil B. DeMille's The Godless Girl (1929). It's the saga of high school students Judy and Bob—ardent atheist and zealous Christian respectively—who both end up inmates in a sadistic reform school. I saw clips from this recently in the TCM documentary Cecil B. De Mille—American Epic, which screened at the 2007 SFIFF50, and all I can say is … oh brother!

On a final note, anyone looking to update their collection of film-related books will be glad to know that The Booksmith will be setting up shop in the upstairs mezzanine, and will feature book signings by festival guests Robert Osborne, Leonard Maltin, William Wellman Jr., Eddie Muller, Mick LaSalle and others. Also, at SF360, Sean Uyehara has an interesting chat with the new Silent Film Festival Executive Director Stacey Wisnia.
Posted by Michael Guillen at 7/12/2007 07:16:00 PM