FABULOUS FASHION IN FILM FESTIVAL—Tavo Amador on Adrian & The Women 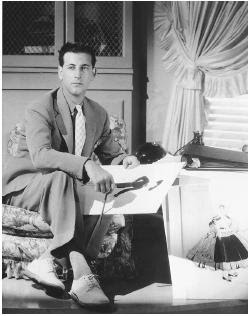 Included among the opening night festivities for the Fabulous Fashion in Film Festival—which included Juanita More exalting "Pink" and Jeffrey Sebelia entering the auditorium hoisted onto the shoulders of Santino Rice and extravagantly sprinkling glitter onto the audience—was B.A.R. columnist Tavo Amador's appreciation for The Women's costume designer, Adrian. 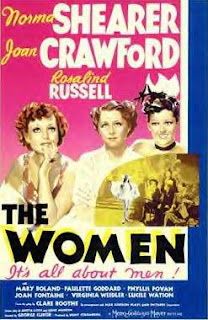 On the first day of shooting, the openly gay director George Cukor told the all-female cast, "Girls, we've got a movie to make so pull in your claws and get to work." Although she's not as well-remembered as many of her contemporaries, Norma Shearer was a huge star, dubbed by MGM: "the First Lady of the Silver Screen." Her contract stipulated that she would be the only actress billed above the title; a provision that she graciously waived for Joan Crawford. Crawford, however, resented Shearer who was the widow of MGM's Chief of Production Irving Thalberg. Crawford felt that Shearer had the inside track on good parts so, during filming, she would rattle her knitting needles while Shearer would be shooting her close-ups.

As production drew to a close, the third leading lady of the film Rosalind Russell called in sick. It seems that—although Ms. Russell had two key scenes to shoot—she had come down with a severe case of billing-itis. Her agent told the studio she might recover if her name appeared above the title. It was too late to replace her so MGM agreed but her name is in much smaller letters than Shearer's and Crawford's. 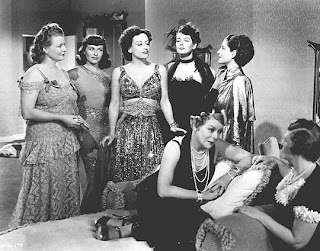 The Women is about social status and marital infidelity in an era when a woman's position in society was determined, first, by her father and then by her husband, or a lack of one. …It's about class distinction, social climbing, and superficial values, which is why it remains timeless. The author Clare Booth would later marry Time Magazine's founder Henry Luce and be named ambassador to Italy by President Eisenhower.

Adrian's clothes underscored each character's social position and personality. Perfume shop girl Crawford's wardrobe is flashy and sexy. Society matron Shearer's is conservative and sedate. The bitchy Russell's outfits are like her character: over the top and wonderfully exaggerated.

Gilbert Adrian was born in Connecticut in 1903 and studied at the Parsons School of Design in New York and later in Paris. His first success came designing costumes for Irving Berlin's "Music Box Revue." Cecil B. DeMille brought him to Hollywood and in 1928 Adrian became Head of Design at MGM. His range was exceptional—Greta Garbo's incredible costumes in Camille [1936], Norma Shearer's lavish wardrobe for Marie Antoinette [1938], and the drag of The Wizard of Oz [1939]—but, he's best remembered for the contemporary clothes he created for Joan Crawford in 28 movies. 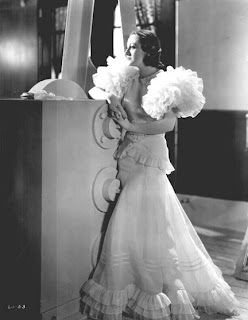 While her face was intensely photogenic, Crawford's figure posed challenges. Her legs were gorgeous but she was very long-waisted and had very broad shoulders. Adrian's designs artificially raised her waist to make her legs look longer and he exaggerated her shoulders, giving her a slim silhouette. More than any other star, she personified the American working girl of the era and her clothes were widely imitated. This dress that Adrian designed for a 1932 film called Letty Lynton, Macys New York alone sold 50,000 copies. Some of them to women!

Like most people of the era, Adrian was closeted. In 1939 he married Janet Gaynor, the first actress to win an Academy Award and a lesbian, who once ushered at this very theater, proving that gays and lesbians have been in the Castro forever. He left MGM in 1941 to work [independently]. In 1946 Crawford—now with Warner Brothers—had him design her sensational wardrobe for Humoresque. He and Gaynor retired to Brazil; their ranch was owned by Gaynor's girlfriend Mary Martin. Yes, Peter Pan and the original Maria in The Sound of Music was a dyke.

Adrian returned to MGM for 1952's Lovely To Look At and in 1959 was working on costumes for the Lerner and Lowe musical Camelot starring Richard Burton and Julie Andrews when he died suddenly of a heart attack.

Two generations of women copied the styles he created for Crawford. A few years ago Giorgio Armani paid him tribute. The windows of the Armani Emporium featured mannequins wearing the Italian designer's suits. Behind them were huge blow-ups of Crawford wearing Adrian ensembles.

So sit back, enjoy The Women—which is really all about men—and remember: we're all born naked so everything you put on is drag.
Posted by Michael Guillen at 7/31/2007 09:41:00 AM

Excellent. As I've been marching across time through the cinema I keep seeing credits for Adrian, Adrian, Adrian. Now, I finally know who the guys is. I first recall seeing his credit on Madam Satan (1930) which features a number of increasingly outrageous designs in a fashion show aboard a doomed Zeppelin (no, really). And he seems to have worked with Garbo on everything since the talkies began. Thanks, M.

Thank you, Thom, for confirming my hunch that Amador's comments on Adrian would prove of interest to others. I deeply appreciate your continuing support.

Respectfully, the addition of Janet Gaynor and Adrian on lists of gay/lesbian celebrities is based on hearsay. Being gay myself, I understand that no one wrote our history down at that point and that our subculture, like medieval tales, has been transmitted verbally, but I think we can and should do better than that. I have been researching Adrian for the last 11 years and can find no credible evidence that he had gay affairs. Even those autobiographies which allude to his gay behavior have so many other errors as to undermine what may be true. The fazenda that Adrian and Janet Gaynor had was purchased by them in 1949 following their invitation to a film festival in Brazil. Mary Martin and her husband Richard Halliday bought an adjoining fazenda at a later date. Many other celebrities bought Brazilian ranches at the time as Brazil was considered the most advanced of the Latin American countries and was building their much-promoted "modern" capitol, Brasilia.

I just love the women's clothing in this film. That white dress with the puff sleeves is incredible. Very glamorous.