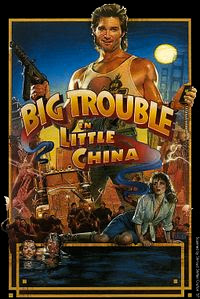 It's truly heartwarming to see how much Jesse Hawthorne Ficks is beloved by his MiDNiTES FOR MANiACS fans and—more interestingly—how he cheerleads their adoration. The man knows how to work a crowd. Co-presenting John Carpenter's Big Trouble In Little China (1986) with SFIAAFF will undoubtedly win him some new converts.

Celebrating the film's 20th anniversary, Ficks remarked, "This film has been such a bitch to try and track down. There's no prints in the world except this print. We got it from London." Admitting he had never actually seen the film on the big screen, Ficks then took count of who had and where. He joked there were more people at the SFIAAFF screening than there were at the opening weekend in 1986. "So give yourselves a hand!"

Acknowledging the co-presentation by SFIAAFF, Ficks added, "How many times are you going to get to see Big Trouble in Little China at a film festival?!" For the SFIAAFF crowd, Ficks explained: "MiDNiTES FOR MANiACS is a series I've been doing for about six years. It's to highlight all the dismissed and overlooked films from the '70s and '80s. These are the movies that you begged your girl friend or your boy friend to watch. And then they hate you."

"John Carpenter, he's like the king of these movies that never got respect. What are some of the other movies that he's made? Dark Star. Escape From New York. The Thing. My personal favorite: Ghosts From Mars. You better re-watch that. But nothing really touches Big Trouble in Little China because this was John Carpenter's commercial film. This was his big break. And it seems like he didn't take it too seriously. One of the great things about Big Trouble and why I feel like it's super necessary to watch this 20 years later is that the stereotypes of Chinese men and women in this film are so hyperstylized, and so beyond belief, that now we can give it a big hug. Because the movie is hugging you! I think Carpenter knew that in 1986 and it took 20 damn years for us to catch up to this movie. I mean, Kim Cattrail [Sex and the City] is in this movie! Right? Kurt Russell's doing his John Wayne impersonation except he can't get anything done. He has to depend on all of his Asian friends to fix the damn thing. So let's hear it for Dennis Dun! He's the real star of this movie. Let's hear it for sleepy-eyed Victor Wong. And he's so good you're going to have to go rent all the Three Ninja movies after this. You can buy them, actually, in a three-pack, I think. And then James Hong, man. He's still alive! He's 2000 years old in this movie and he's still alive."

Lastly, Ficks encouraged his audience to turn off their cell phones and text messaging. "You know when you open that shit everybody can see it behind you. You're checking the time? Don't do it! Big Trouble plays on the big screen once in your lifetime. So have some respect."