THE WIZARD OF GORE—The Greencine Interview with Herschell Gordon Lewis 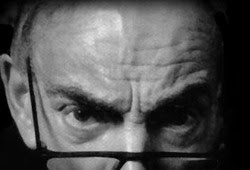 Fate works in mysterious ways. Last December, I posted a response to a TCM broadcast of The Enchanted Cottage as a Christmas missive to my ailing mother. For some reason or another Tim Massett who runs the San Marco Theater in Jacksonville, Florida, picked up the piece for his newsletter and forwarded a response from a woman named Grace. Tim and I exchanged email and he informed me of a series he was programming called "The Talkies" wherein he was bringing directors to talk about their movies. The first in the series was with Herschell Gordon Lewis. To make a long story short, Tim got me in touch with Herschell and Greencine has published our conversation.

It pleased me that Twitch teammate Todd Brown likewise took note of Tim's series "The Talkies", promoting the upcoming installment in the series—John Waters on Polyester! Wish I could wing out to sniff that one!