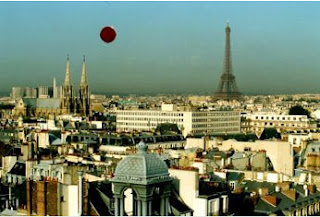 The cinematic group hug is well under way. No sooner did I read David Bordwell's report on the latest triangulation of Tsui Hark, Ringo Lam and Johnnie To (via The Greencine Daily) than the current issue of Film Comment (March/April, 2007, p. 7) announced that the Musée d'Orsay has commissioned Raul Ruiz, Jim Jarmusch, Oliver Assayas, and Hou Hsiao-hsien to make a series of features. "The one stipulation is the museum must appear somewhere in each film. The only factoids disclosed so far for Ruiz's project are the star, Juliette Binoche (who will appear in all four films), and the title Lapidatio—which everyone knows is Latin for 'the throwing of stones.' " Hou Hsiao-hsien's adaptation of the 1956 French classic The Red Balloon is his contribution to this omnibus. The working title for Assayas's piece is Family Souvenirs and info on the Jarmusch project is forthcoming.

The segment by Ruiz will be a ghost story mixing past and present, inside the Orsay museum (which is a former train station), between France and Chile, inspired by The Dybbuk (1937/Waszynski/Poland).

Thanks, Harry, that's a great tip. I love the Orsay. Last time I was in Paris I spent two whole days there.