SHOUTOUTS TO MY HOMIES

Yes, it's exponential and unruly, but yes, it's still fun creating a social weave with other film bloggers. New to my blogroll are three Bay Area sites. Adam Hartzell, who has long been one of my favorite writers at Koreanfilm.org and Greencine, and who has proven to be a charismatic and informative champion of the films of Hong Sang-soo at this year's SFIAAFF, is teasing us with the prospect of offering up blog entries at his newly-launched site Notes Inspired By the Film. Let's see how long he can milk his beginning. I'm already finger drumming my table in anticipation of his next post. Oh, the pressure….

Sara Schieron has finally set up her own blog Reel Girly, after great work at Filmshi, Greencine and the San Francisco Bay Guardian. Focusing primarily on spillover pieces she hasn't sold to other venues and with more attention to the ear than the eye, Sara offers up podcasts of her interviews. I'm a print man myself so I'm hoping she'll veer into transcribing some of that material; but, hey, the woman's busy…. 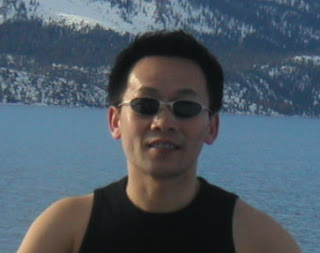 I run into Tony An at almost every press screening I go to. He's always a welcome and friendly face. He's long been a regular reader here at The Evening Class and I'm glad he finally came out from under his shell to offer a link to his own site YNOT At the Movies where he offers succinct impressions of current film fare. He also has a killer business card that he had printed up in Hong Kong.
Posted by Michael Guillen at 3/19/2007 11:26:00 AM

hahahaha. Yes, I promise there will be more than that post. I might actually skip my movies scheduled today at SFIAAF to finalize my next one. Thanks for the shoutout, (and the 'subtle' motivational push). It was great finally getting to meet you at the fest this weekend.

The pleasure in meeting is mine. Your introductions to the Hong Sang-soo films have added so much to my appreciation.

Thanks for putting up my picture up, I am glad that it's not at the post office. :) It's nice to run into you at almost every screening, except I don't go to Florida. He he.. I am glad that you like my card, I designed myself, but printed in Beijing. I actually never been to Hong Kong, I need to go soon. See you at the closing night if not before?