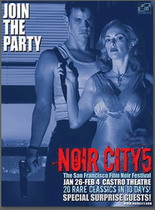 San Francisco is rapidly becoming the noir capital of the world! It's easy to understand why when Eddie Muller—self-proclaimed "Czar of Noir"—has whetted his Bay Area audiences by educating them through rescued rarities fanfared at his Noir City festivals. Noir City 5 opens up tonight at the Castro Theatre with an Anthony Mann vehicle, Raw Deal, featuring an on-stage appearance by Marsha Hunt, the film's leading lady, who will likewise greet her fans at a reception where she will autograph copies of The Way We Wore: Styles of the 1930s and '40s in the Castro's mezzanine. Muller has secured a pristine 35mm print from the Library of Congress. 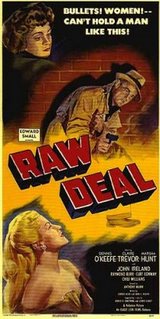 It was filmbud Max Goldberg's write-up for the San Francisco Bay Guardian that convinced me to shell out a C-note for the Noir pass that will get me into tonight's sold-out reception and Marsha Hunt double-bill. "I've often thought," Max writes, "that the way the classic femme fatale seduces her doomed prey is the onscreen equivalent of the way films draw in—and obsess—their audiences. A great many movies are stylish and smart to the point of irresistibility; how many times has the promise of hard shadows and unrepentant fatalism at the theater won out over a sunny afternoon in the real world?" Max engages Noir City's host Eddie Muller in an informed conversation that highlights Muller's impassioned strategies to preserve film, reactions of old-school talent to the attention they receive decades after the fact, and why audiences fell for such movies in the first place. 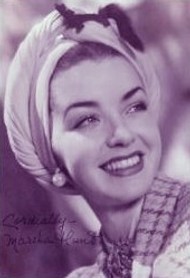 Robert Avila's covering the event for SF360, describing film noir's "iconic images as definitive as the light cut by a Venetian blind." Avila evokes: "Sporting a long line of macho loners, slick villains, seedy locales, and dangerous dames, the usually low-budget but stylish look and the preposterously cool, street-smart attitude of these films laid an unruffled surface over a powerful undercurrent of social anxiety, moral uncertainty, and pervasive corruption. It added up to a telling portrait of the system that tended to blur the lines (when it didn't outright erase them) between business and crime, good guys and bad, autonomy and fate. Sure, some semblance of justice would often be meted out to the worst offenders in the end, but instead of following the condemned out of the room, the guilty verdict tended to hang around afterward like languid cigarette smoke—it got onto everyone there."