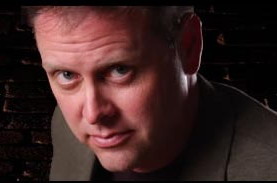 "We're baaaaaaack," Eddie grinned on the Castro stage to his cheering, adoring crowd last Friday on opening night of Film Noir 5. He identified the short film serving as the festival trailer as a 2006 piece (3 mins. & 48 secs.) by Osbert Parker, a 26-year-old Londoner. Parker's short Film Noir has been creating quite a stir on the international festival circuit and Muller elected to lead off the festival with the short to pay tribute "to how film noir continues to inspire artists even today." Created in-camera, this mixed media animated adventure combines live action, found objects with photo cut-outs woven into a non linear narrative and manipulated into a dark story of romance and psychological tension. It perfectly captures the spirit of film noir.

Inspiration—such as seen in Parker's film—is really what the festival is all about, Eddie emphasized, encouraging his audience to attend the festival's full 10 days. "During the course of this festival, I do hear from a lot of people who are writing books, plays, short stories, making films, everything inspired by these old films and I am very much inspired by all that. I think there is a wonderful circuit that is kept alive in all of this. First off I just want to pay tribute to all of you folks for making San Francisco the Noir Capital of the World!" Mentioning that the festival is being covered by "the paper of record, The New York Times, and by Telerama in France", Muller gloated, "They are coming to us!"

Muller acknowledged the tremendous coverage in all the local media who have taken the festival under their wing. "Whichever one you prefer, I give it up completely for the Chronicle, the Guardian, and the Weekly, they've all done right by us, the Bay Area Reporter, all the fabulous bloggers here locally. We even have someone blogging from Seattle. It's just sensational. So I really give thanks to all the media people who are paying attention." 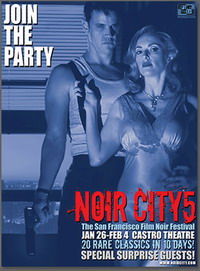 Muller likewise thanked the poster boy for this year's festival, Robert Mailer Anderson, and his "playmate" Ivory Madison, "Miss Noir City 2007." Muller requested we stay tuned about further announcements regarding the development of a Mr. and Miss Noir City competition. "It's kind of getting legs," he smiled, "It's kind of taking off. It might become like a whole yearlong campaign."

"A very cogent case could be made," Muller continued, "for noir being born right here in San Francisco. Back in 2003 when we did the first Noir Film Festival here at the Castro, we made that very plain by showing nothing but San Francisco Noir. Don Herron did a wonderful piece in that book claiming that a good argument could be made noir was born right here in San Francisco. If, in fact, it was … it was born at 891 Post Street at the corner of Post and Hyde in an apartment building where Dashiel Hammett wrote The Maltese Falcon." In the audience Muller acknowledged the presence of Richard Layman (the foremost Dashiel Hammett scholar in the world), Julie Rivette (Dashiel Hammett's granddaughter), and Jo Hammett Marshall (Dashiel Hammett's daughter). "You are not getting closer to the genesis of noir by blood than who is here tonight."
Posted by Michael Guillen at 1/29/2007 10:37:00 PM

I saw what's scheduled and wish I was there. You better take advantage of seeing Kim Novak on the big screen!

Tomorrow night! Rita ripped it up tonight! She was applauded after each musical dance number as if it were a live performance.