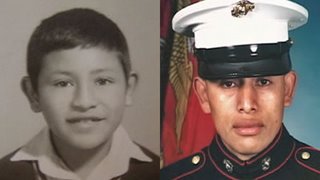 It's rewarding when someone champions a film, enthuses you to watch it, and you walk away from the experience wanting to champion the film as well. I dedicate this entry to Rob Davis whose Errata entry on The Short Life Of José Antonio Gutierrez when it played the Mill Valley Film Festival inspired me to catch the film when it was shown—albeit by dvd projection—at the Galería de la Raza. As good fortune would have it, however, Heidi Specogna's The Short Life Of José Antonio Gutierrez was projected in 35mm on the Castro Theater's large screen as part of the 2007 Berlin & Beyond program. The documentary was represented by the film's cinematographer, Rainer Hoffmann.

Inbetween screenings of Valerie and Combat Sixteen, Rainer Hoffmann and I snuck up to the Castro Theater's mezzanine to have a brief chat about his work on this illuminating documentary, winner of the Grand Jury Prize at the 2006 Sundance Film Festival.

I asked Hoffmann how he became involved as cinematographer on the project? He replied that he and Heidi Specogna were in Latin America researching two different stories when they received information that the first soldier killed in the war in Iraq was a Guatemalan. Guatemala claimed him as their hero. That's when the duo decided to research what was behind this story of a green-card soldier killed overseas fighting for the United States, so far away from his native country.

As they first developed the project, the U.S. Military were obliging about allowing Specogna and Hoffmann onto Camp Pendleton to research the Gutierrez story, but, as the film progressed they refused all further accommodation. It took them a year of negotiating with the Pentagon to gain permission to film at the base. When they arrived at the camp on the first day the press officer said they could film the raising of the flag and that was all. Hoffmann objected that they had not spent the past year negotiating access only to shoot the raising of the flag. He stressed they wanted to shoot soldiers in training and to interview some of the soldiers about Gutierrez. It was obvious the press officer had no clear conception of what Hoffmann was after but, after agreeing to help out as he could, this gave Hoffmann the opportunity to shoot what he wanted. What proved most important was that Specogna and Hoffmann had been in phone contact with Antonio's platoon major who expressed his desire to participate in their documentary. At Camp Pendleton they asked if there was anyone from Antonio's platoon who they could interview and the press officer said no, everyone was gone. Hoffmann then said he had a phone number for Antonio's platoon major and could they phone to see if he was available? Camp Pendleton's Security were so taken by surprise that they followed through on Hoffmann's request and, sure enough, the major was on base and available. They secured a room to conduct the interview and, surrounded by security, they accomplished same.

One of the most tragic aspects of Antonio's death was that he was reputedly killed by friendly fire. I asked if they had any trouble investigating that fact or if the military had any comment? Hoffmann said that was the only issue where security stopped the interview. Specogna was not allowed to pursue that line of questioning but was offered the Pentagon's official report. After that day of shooting at Camp Pendleton, Specogna and Hoffmann were refused any further contact with Antonio's platoon members and all further contact with the base was discontinued. Hoffmann couldn't confirm that this was due to base officials realizing where they were headed with the documentary, but he assumes so.

One of the documentary's main strengths is—as Rob Davis wrote—"the way it artfully blends the particular and the general. Gutierrez is one of many people who've followed a similar but less celebrated arc, so telling his story sheds light on countless others that remain untold, and yet at no time does Specogna coerce the details of his life into symbolism. And notice what she does with the parts of his journey that weren't captured on video: she shows us other people who are in similar straits, people planning to slip across the southern border of the United States as the last best hope for helping their families. So: the general story fills out the particular story as much as the particular fills out the general." Hoffmann achieved this by recording the efforts of immigrants traveling North by train and confirmed that he captured this material by participating himself in the journey from the Guatemalan highlands, actually riding the trains and such, the selfsame way Antonio had taken his journey.

Their objectives with the documentary were twofold. First, to give a face to this unknown soldier to pronounce his particular personality and humanity and, second—because Antonio's is the story of many, of thousands, who journey North to better their lives—the documentary became not only his story, but the stories of so many others like him. Thus, once this unknown soldier was given a face, his face became that of Everyman, indeed Everywoman, dreaming of el otro lado. The scenes of the safe houses where those crippled by train accidents have gathered for practical and emotional support underscore the all too human cost of this dream.

Finally, I commended the use of Eva Mattes as the narrative voice of the documentary. Mattes, it might be recalled, is the German actress who in the '70s worked twice with Michael Verhoeven, several times with Rainer Werner Fassbinder—including The Bitter Tears of Petra von Kant—and a few times with Werner Herzog. Though she has consistently worked since then and is regarded as one of Germany's best actresses, I had not seen much of her since decades past and was glad to be reacquainted with her through the documentary voiceover. The filmmakers felt a woman's voice would be good for the voiceover because her soft, calm and quiet voice served an effective counterpoint to the heavy themes of the story.

I asked if the film had been shown in Latin America and Hoffmann replied not as of yet though next month it begins a two-month tour from Mexico to Guatemala, possibly even Honduras.

An online memorial page has been set up for José Antonio Gutierrez. Heidi Specogna has been interviewed by IndieWIRE and, along with the fine Errata write-up, Greencine's David D'Arcy likewise extolled the virtues of the film from last year's Sundance Film Festival. A big part of why Antonio joined the Marines, D'Arcy writes, was to get a green card. He pointedly reminds: "We learn that thousands of immigrants are doing the same, putting their lives on the line, and sometimes giving their lives, so that they can remain legally in the US. All this is framed in an atmosphere in which illegal immigrants are almost as unpopular as Osama bin Laden."

"There is another part of this film that is a glimpse into the sociology of the armed forces," D'Arcy continues, "which are often the last chance for those who can't find a job and can't afford an education, and certainly can't get a passport. The military at its lowest level is filled with immigrants, mercenaries fighting America's wars in the hope of becoming American. By the term mercenary, I don't mean ruthless and cold killing for a buck. I'm just suggesting that these cash-poor young men and women are paying a price for citizenship. It can be three years of their lives at war. It can also be their lives."

01/26/07 UPDATE: I love the Twitch team! Diggthis just advised: "A little bit of news on this film ... Canada's Atopia Pictures have just secured all North American rights to The Short Life Of José Antonio Gutierrez and plan a limited theatrical run in April to be followed by a DVD release."

hi Michael, thanks for your kind comments, I'm very glad to have met you in person. I'll forward my interview for you to read it; I'd like to know what you think of it. I really admire the flair you have for interviewing people, it's very personal and insightful; I'm learning a lot from it
Best,

Thanks for the dedication, Michael, and for the details about the film. I wondered how much freedom they had to talk to his platoon. I'm glad they got some access -- I think those sections of the film are very important.