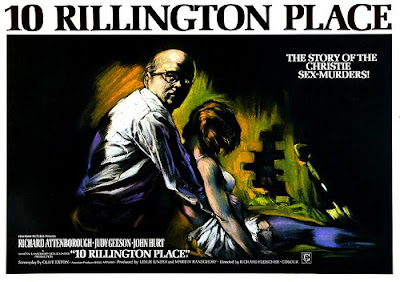 Dennis Harvey's informative Bay Guardian write-up on Richard Fleischer's 10 Rillington Place (1971)—the third installment in Yerba Buena Center for the Arts' "Neglected Horror" series—relieves me from having to be thorough in any sense of the word. I need merely concur with his assessment that this "chillingly poker-faced tale" (based upon the infamous 1948 John Reginald Christie murders in Britain, which—due to the execution of an innocent man—played a significant role in that country's abolition of the death penalty) is a "credible version of the much-disputed case." Likewise, I agree with Harvey's statement that everything about 10 Rillington Place "is astutely controlled, but two performances—[Richard] Attenborough's and [John] Hurt's—push that description into the realm of brilliance, indelibly etching the respective banalities of evil and of innocence." 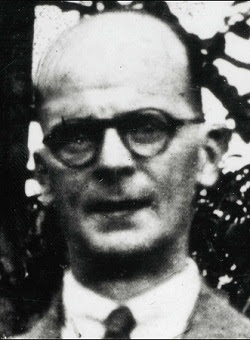 Although forewarned by YBCA's capsule, my first thought after watching 10 Rillington Place was, "Why is this considered 'horror'?" To which my mind quickly answered, "Because it is." Sexual psychopath serial killers will always be respectable members of the horror genre, albeit guised in police procedurals. 10 Rillington Place is a soberly measured portrait of seemingly harmless John Reginald Christie, an ordinary middle-aged man, balding, bespectacled, suffering from chronic back pain, who killed eight times over a 13-year period. As described by Chris Wood at British Horror Films, Christie was "a deranged slaphead with a predeliction for gassing young women and abusing their twitching corpses . . . frotting the body and moaning with orgasmic delight."

"Never overly violent, conventionally frightening or aggressive in tone," David Mercier writes (at his retired site Film Judge), 10 Rillington Place "manages to chill and create enormous discomfort with such ease. By taking for granted the fact that the audience knows what is going to happen, it presents quite horrific scenes in a very matter-of-fact way, which means the audience are engrossed in what is going on, but know they are powerless to do anything about it. This is a very difficult balance to get right, but this film succeeds superbly, and creates an atmosphere where the viewer feels like they're physically watching the crimes behind a piece of unbreakable glass." He concludes that the relaxed style of the film "belies a ruthless center", which in many ways "matches the charming and wicked efficiency of Christie himself." If this sounds like Alfred Hitchcock, you're spot on. In fact, 10 Rillington Place reminded me very much of Hitchcock's Frenzy (1972). When poor Beryl Evans (Judy Geeson) is being raped and murdered upstairs, workmen are going about their business downstairs. 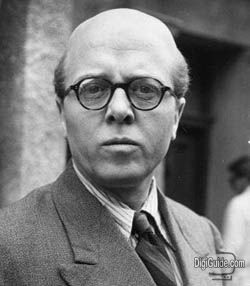 Being invited to a cup of tea because "the kettle's on" has never been so dangerous. The rope Christie uses to strangle his gullible victims is the same as that used for a rope chair he likes to sit in. His quiet decision to strangle his own wife because she has finally caught on to his shenanigans jumps straight to the act of his burying her beneath the floorboards. This effective ellipse reminded me of that horrific realization in Henry, Portrait of A Serial Killer (1986) when you realize Henry has actually murdered the young girl who has been so kind to him; when you realize some men just can't help their killing instincts no matter how kindly you try to rehabilitate them, or how sympathetic their victims are. Pat Heywood deserves mention as Christie's dowdy wife Ethel who refuses to acknowledge the evidence of her husband's actions, averting her gaze and plugging her ears as he drags bodies out of the apartment to hide them in an outdoor shed.

Monica Sullivan points out: "There is no attempt to explain or excuse Christie and the sheer matter-of-factness of his crimes is the most terrifying aspect of this film." I agree. What makes the murders in 10 Rillington Place so horrific is that we're never really given the backstory as to Christie's motivations. We're never given any insight. Likewise, we never know why Timothy John Evans (John Hurt) so willingly allows himself to be scapegoated and framed for the murder of his wife and child, only rallying to his own defense when it is far too late. Indelible etchings of the respective banalities of evil and of innocence, indeed. 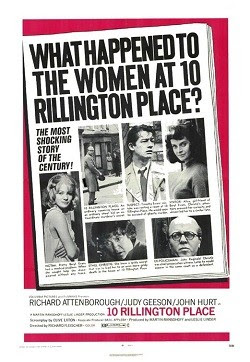 According to the IMDb, Fleischer's treatment of the Christie stranglings was filmed on location at Rillington Place, which had changed its name to Ruston Mews after the notorious killings. However, the house that was used was not 10 Rillington Place—it was actually No. 6. The street was demolished in the year after the film's release to make way for the Westway urban motorway.

The film draws heavily from Ludovic Kennedy's book of the same name which, in turn, relied extensively on trial transcripts. Kennedy was an outspoken critic of the death penalty and used the unjust execution of Timothy John Evans as case in point. According to John Hurt, "real life retired executioner Albert Pierrepoint was a technical advisor for the execution scene. This scene was the first British people had seen in a cinema of a British hanging, and as it was still Government Official Secrets Act, no details regarding the scene was available. This is where Albert Pierrepoint came in, under an assumed name, and was able to re-create the harrowing scene to maximize the true terror of what it must have been like." Evans was pardoned 12 years after his execution and his body exhumed and reburied in sacred ground. That justice could be so belatedly cavalier might explain why this film is considered horror.

The scene that affected me the most is when Evans is sentenced to death by hanging and Christie, present in the court room, breaks into sobs of relief. Attenborough, perhaps better know for directing Ghandi and for playing the kindly scientist in Jurassic Park, delivers a powerfully understated and thankless performance as John Reginald Christie, as much a monster as anything else horror has to offer.

Michael, I couldn't agree more with what you say - a highly interesting read. What I find so different about the film is the way it presents murder, and I think your comparison with Hitchcock is a good one. Most horror films these days forget that the act of murder is horrific in its own right, and often sensationilse it with gratuitous gore. What 10 Rillington Place does is remind us that an on-screen killing should be terrifying. Of course it benefits from the fact that Christie wasn't fictional, and this in turn makes his on-screen actions seem more real. But as you rightly say, the film also gives no clues as to his motivation, and the way he comes across as so real, yet so unatural, is quite remarkable.

David, I'm honored that you swung by to comment. Thanks. Your own write-up confirmed many of my thoughts and feelings. I figured it was easier to quote you than rewrite. I look forward to exploring FilmJudge more thoroughly when time allows.