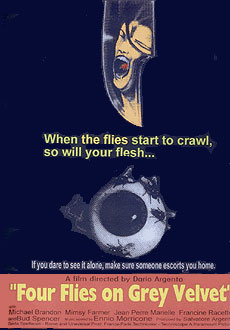 A shout out to Brian Darr at Hell on Frisco Bay for his consummate reportage of Bay Area cinema. He helps me calendar and prioritize. His "Fear of the Dark" post alerted me to the rare screening of Dario Argento's Four Flies on Grey Velvet, the first entry in the Yerba Buena Center for the Arts "Neglected Horror" series. I'm a longtime Argento fan and—though Four Flies is admittedly not Argento's best venture—it was a screening I was not about to miss, and was not without reward.

Four Flies on Grey Velvet was Argento's third giallo, following L'Uccello dalle piume di cristallo (The Bird With the Crystal Plumage, 1970) and Il gatto a nove code (The Cat O' Nine Tails, 1971) (the so-called "Animal Trilogy"). One of the main components of the giallo—as pointed out by Xavier Mendek in his Senses of Cinema profile on Argento—concerns "the fate of amateur detectives who find themselves compromised by their involvement in crime and, as a result, are forced to go outside of the law to mount an unofficial investigation in order to prove their innocence." This is certainly the case with protagonist Roberto Tobias (Michael Brandon) who—angered that he is being stalked by someone in shades and overcoat—confronts his adversary in an abandoned theater and by way of scuffle inadvertently kills him. Or does he?

Howard Thompson of The New York Times was one of the first to review Four Flies. He was hardly enamored with the film, describing it as "farfetched", "banal", and "flabby." Further, he complained that "[i]n the guesswork department, Mr. Argento and his two writer colleagues simply aren't fair. All that circuitous teasing and those red herrings don't produce a shred of real evidence to nibble on. You're on your own, in pure hit-or-miss speculation."

Despite his complaints and reservations, however, Thompson had to concede that the film had its compelling, suspenseful moments, "Argento at his chilling best." Which says something about Argento's auteur proclivities, his unique sensibility, even in uneven projects. I was also struck by Thompson's exasperated query, "[W]here on earth are the police?" As if movies are tethered to practical reality, and not imaginative vision. It reminded me of Kiyoshi Kurosawa's comment following the SF International screening of Doppelganger some years back wherein Kurosawa reminded his audience that his movie was an alternate reality where there were no police and a doppelganger could get away with murder. Perhaps since 1972—when Thompson caught Four Flies in distribution—audiences and critics have acquired a better grasp on the aesthetic strengths of alterity? Because I would argue it is exactly Argento's artificiality that proves thrilling even when the plot proves silly. Who needs plot when you have beautifully-staged abstractions that grip you in heightened anxiety, if not sublime terror?

Roger Ebert also reviewed Four Flies upon its release and likewise found little to recommend it other than the presence of Mimsy Farmer, "who has the best mouth since Joey Heatherton", "looks a little like Jean Seberg, has a marvelously sculptured face and deserves to get some of those Mia Farrow roles." Like Thompson, Ebert protested Argento's purposeful obfuscations, stating Argento "cheats in another way: He throws in absolutely no clues, so that we're just as surprised at the ending as the hero is."

Ebert offered insight into Argento's playfulness. He wrote, "One of Hitchcock's favorite subjects has been the innocent man, wrongly accused. Four Flies on Grey Velvet does have a potentially interesting plot twist: the guilty man, wrongly accused." Finally, somewhat letting the cat out of the bag, Ebert complained, "There is only one fly in this movie." And that's true. In the opening sequence Roberto is being pestered by a mosquito, not a fly as it is usually described. (As an aside, I must mention that reading a review Ebert wrote nearly 30 years ago seems my way of wishing him well during his current health crisis.)

Ed Gonzales at Slant Magazine has, perhaps, the most insightful and appreciative commentary on Argento's body of work—Dario Argento's Dreams—which includes his synopsis of Four Flies and his astute conclusion that the film is "perhaps most remarkable for it's unusual spiritual underpinnings and Dario Argento's deft attention for sexual signifiers"; particularly the film's heightened "homocentric framework" which Gonzales skillfully explores.

I also strongly recommend Gary Needham's Kinoeye essay comparing Argento's Cat O' Nine Tails with Four Flies On Grey Velvet. He raises "central issues of gender dynamics and the Italian horror film's fixation with boundary transgression and breakdown" and provides salient psychological insights not only into this film, but the genre, and the director himself. Of special note is his discussion of "the perversity inherent in deviant and oppressive familial relations." The family, he writes, lies at the root of horror cinema.

It's interesting that Dave Kehr of the Chicago Reader would describe Argento as "Rome's answer to William Castle." Depicting gender as "the dread of difference", and the family unit as the root of horror, Argento's Four Flies aligns with Hitchcock's Psycho and Castle's Homicidal.

Through his use of doll-like masks, both in Four Flies and his follow-up Deep Red, Argento references the seeming innocence of childhood, revealed by memory—in the grip of Freud—to be a hazardous terrain of influential harm.

With so much having been written about Argento and Four Flies On Grey Velvet, I wanted to merely tease out what appealed to me. My favorite scene is one where Roberto is in his apartment in the dark at night. Outside the window tall trees are rustling in the wind; an "aural clue." Later, Argento would openly admit that Deep Red was his version of Antonioni's Blow-up. Four Flies prefigured that creative intent. The sound of the wind in the trees outside Roberto's apartment reminded me of the sound of the wind in the trees in the park in Blow-up, which Jennifer Macmillan (Invisible Cinema) identified as her favorite "cinephiliac moment" in the commentary section of Girish Shambu's post on the theme. It certainly was my favorite "cinephiliac" moment in this film.

Argento frequently achieves abstraction through his strategic use of silence and a sound design which Xavier Mendek describes as "radical splits between sound and image tracks." Though somewhat forced, I was intrigued by the scene where Roberto meets and hires Arrosio (Jean-Pierre Marielle), the private detective. The sound of his car's engine "drives" Roberto up the steps and into Arrosio's office.

It is the stylization of Argento's cinematic murders that compensates horror with beauty. The reflection of victim Dalia (Francine Racette) in a plunging knife blade becomes a clear, death-dealing mirror. Her head bumping down the stairs is both hilarious and exciting, again for its sheer artificiality. Argento has a keen gift for mixing the comic with the horrific.

The link between Roberto's repeated fantasies of execution by decapitation connects with the actual outcome of the film's killer. Though Robert Firsching (The Amazing World of Cult Movies) opines Roberto's "recurring nightmares of a decapitation in an Arabian town-square … give the film a bit more uncomfortable currency than it really needs", I concur with John White (10,000 Bullets) who observes Roberto's nightmares "foreshadow how justice will be delivered."

That justice is delivered in what Needham terms "the most poetic and tragic fate of an Argento assassin", i.e., "simply breathtaking." Xavier Mendak emphasizes Argento's technically innovative approach to this final scene of decapitation. He used a technologically-advanced high-speed medical camera, identified by Needham as "the Pentazet, a German camera which consumes 30,000 frames per second but when run at normal theatrical speed shows the image in a wholly different temporal register. It is not slow motion, as the image doesn't drag or shudder, but flowing."

As Argento is fond of reminding us, death has never been more beautiful.

I was somewhat distressed that the print shown at YBCA was a full 15 minutes shorter than the stated running time ... I'd love to know what it was that we didn't see ...

As cinephiliac moments go, it's hard to top Mimsy Farmer repeatedly tonguing the blood off her lower lip between lines. Oh dear.

Thanks for stopping by to comment, Jim. That's interesting about the film being short 15 minutes. I didn't realize that. Will we ever know?

Thanks for the shout-out, Maya. I was unfortunately unable to convince my current houseguest that going to a rare 1971 horror film was a worthwhile activity when he's not into the genre at all. Hopefully I'll be able to make it to future "Neglected Horror" evenings.

The screening had a pretty good crowd. The discussion over at Twitch has made me all the more glad that I made the effort to go. Doesn't appear that this will be on dvd any time soon.