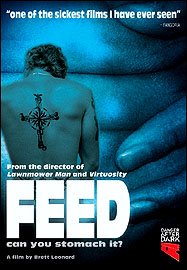 Bruce Fletcher, programming director for San Francisco's Holehead, seemed as surprised as anyone that Brett Leonard's Feed ended up winning audience favorite this year. He booked it as his closing night film in hopes that it would send people fleeing from the Roxie Film Center in disgust but, instead, his San Franciscan audiences "ate it up." His job gets tougher every year.

I had already forewarned Bruce that I probably wouldn't watch Feed. I was too disturbed by the trailer and didn't think I could stomach not only its viscerality but its political incorrectness; but—with the endorsement of his Holehead audience—I figured it warranted the old college try so I watched it on screener at home. To my surprise, I was engaged by Feed. I can't say I enjoyed it, I can't say I didn't want to eat salads for a week, but I was definitely caught up in this "depraved little gem." It's surprisingly less visceral than you might expect; it's what it suggests that is most disturbing, more than what it actually shows.

You know the story: cyberporn investigator Philip Jackson (Patrick Thomas), freshly traumatized from busting cannibals in Germany, begins to suspect that an online sub-dom scene between Feeders and Gainers is being taken to criminal ends at FeederX, an American livecam website, where bets are being laid on missing women forcefed to death. The premise is improbable, of course, because any customers for such a website would have to pay by credit card and could easily be traced and the movie belabors the investigative hacking for dramatic effect, but, credibility aside, Feed is effective for all it sniggering triggers and boggling toggles. Leonard has a firm understanding of the hot buttons in the American psyche. As a thinly-guised indictment of American consumption patterns, Feed scores big, and perhaps even more emetically than Super Size Me or Fast Food Nation.

Alex O'Loughlin as Michael Carter is the perverted psychopath messed up by Mother who—despite the horrible things he is doing to Dierdre (comedienne Gabby Millgate in a complex, believable performance, let alone an astounding fat suit)—manages to come off sympathetic and, I hate to admit it, downright sexy. The contrast of his lithe, tattooed body against Dierdre's immense folds of flesh shortcircuits all notions of acceptable intercourse. But therein lies the rub, eh? Acceptability becomes the platform for perversion and horror. And the hero might end up being even more fucked up than his prey.

Whereas other horror flicks scare through startle shock tactics, Feed leaves a residue of discomfort and queasy unease. Give it a chance on dvd. You deserve to be disgusted and might even find a certain delight in being so.

Cross-posted on Twitch, where one of the readers commented that he was at the Holehead screening and that McDonald's cheeseburgers were tossed out into the audience before the film began! Talk about ODOR-ama!
Posted by Michael Guillen at 7/19/2006 02:00:00 PM