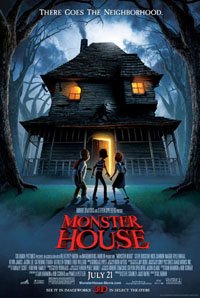 Kathleen Turner arrived on the cinematic scene lusciously embodied and a few degrees warmer than any other dangerous femme fatale I'd ever seen in a movie. Her performance as Matty Walker in Body Heat seared my consciousness. Her shift into comedy as Joan Wilder in Romancing the Stone, and its sequel Jewel of the Nile, revealed an unexpected but welcome range. Her stint as host of the Oscars demonstrated charismatic professionalism. And her voice as Jessica Rabbit in Who Framed Roger Rabbit? provided one of the best lines ever: "I'm not bad. I'm just drawn that way." That voice—which time has Tallulahed—is back, this time as "house wife" Constance in Gil Kenan's Monster House, and there's no doubt she's not only bad, she's monstrous, and purposely drawn that way. More accurately, she's motion-captured that way.

Motion-capture animation, you might recall, created a successful stir with The Polar Express, graduated to the creation of Gollum and King Kong in the Peter Jackson franchises, and has now been ratcheted up one notch further with Monster House where, unlike The Polar Express, the characters are more expressive for being less tethered to the realistic. I won't say the movie is an instant classic, but, I will say the technical wizardy remains fun and appealing to kids. Which kids, however, remains the question.

I'm delighted with Kathleen Turner's participation in the project and, in my estimation, she's one of the main reasons for enjoying this Halloween-themed scary movie thrill ride. Turner became involved through Robert Zemeckis who'd cast her voice as Jessica Rabbit. Knowing of her interest in new developments, Zemeckis phoned her up and said, "Would you be interested in a new technique? You played the sexiest animated character in Roger Rabbit, now you can play the ugliest!" How could she refuse? Joining a choice ensemble of voices—Steve Buscemi, Nick Cannon, Maggie Gyllenhaal, Kevin James, Jason Lee, Catherine O'Hara, Jon Heder and Fred Willard—and introducing the perfectly-cast talents of newcomers Mitchel Musso (DJ), Sam Lerner (Chowder) and Spencer Locke (Jenny), Monster House is an impressive first feature by Kenan, plucked straight out of UCLA film school with the ink barely dry on his diploma. Monster House could probably have benefited from a little restraint—too many rides at the carnival can be exhausting after all—but no harm no foul. My eye's going to be on this guy to see how he perfects his craft in years to come. It's good to know that the Spielberg-Zemeckis tradition of feel good adventure flicks to be enjoyed at a summer matinee has found its protégé.

What kid hasn't been fascinated by a scary looking house in the neighborhood? And what adult hasn't recalled those scary remembrances of childhood? For me it was the house next door with the terrifying Foster Sisters who would charge out of their house threatening us with a broom for eating their crabapples. Monster House captures that feel perfectly because the kids really seem like kids in this movie, they talk like kids, they act like kids, even though placed in fantastic improbable situations. Or, at least, I should qualify, they're kids as adults remember themselves. Granted, all the adults in this story are ineffectual caricatures that only serve to heighten the heroic subjectivities of the three kids who—realizing the house across the street is eating people (mainly adults, and perhaps rightfully so)—bravely set out to take care of the problem armed with bottles of cough syrup, squirt guns and a few sticks of dynamite. It isn't just their imagination that transforms the barren branches of trees into grasping claws, windows into eyes, the front door into a gaping mouth, the chandelier in the front foyer into an uvula, and a Persian runner rug into a frog-like tongue. This house has a grudge and has no issues lifting itself right off its foundation to chase the kids down the street. Location, location, location, indeed! But this is perhaps the main failing of Monster House. Who is its true audience? Rated PG, perhaps more accurately PG-13, is this movie for kids, teens, or adults chaperoning them? Crude potty humor, mixed signals about inappropriate behavior, and a thematic obsession with the uncomfortable shift from childhood into puberty make it questionable that this movie is really for kids. It's probably more for grown-up kids recalling their own latch-key resiliencies. 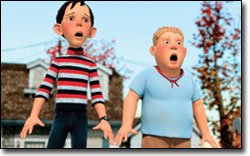 What more could a grown-up kid want? Except to maybe watch it one more time in 3-D.

Great review .. this one indeed may not be suitable for the real younguns, but I'm not one, so I'm looking forward to seeing this later today

Keith, let me know what you think!! Or point me to your own write-up.

I loved the film, and I think it's definitely worth a return trip to see it in digital 3D. It was a pretty revalatory experience for me, as far as technology goes. Really, really beautiful.

From the house rabbit