NEGLECTED HORROR—Eye of the Cat 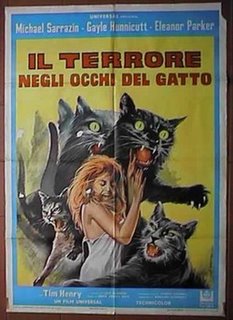 After last week's Four Flies on Grey Velvet, Yerba Buena Center for the Arts continued its month-long tribute to "neglected horror" with David Lowell Rich's ailurophobic Eye of the Cat, whose direction—Variety noted—"often misleads" though "he does manage to get actors to speak bad lines with straight faces." Those bad lines were penned by Joseph Stefano who—to his credit—wrote the screenplay for Psycho and produced the original Outer Limits. YBCA's screening room was nearly full to capacity with a San Franciscan crowd appreciative of the kitschy allure Eye of the Cat has acquired over the decades, from its Edith Head mini-suits to its Sausalito smoke-in (which reminded me of the party skits from Rowan & Martin's Laugh-in—"I told my mother I was a latent homosexual and she said, 'Better latent than never.' "—Ka-THUMP!). I fully expected Judy Carne—that sock it to me girl—to be gyrating with flowers painted all over her body; the movie is just that mod. Can you dig it?

A surprisingly amusing blend between the psychologically perverse Alfred Hitchcock and the melodramatically perverse Douglas Sirk, this 1969 thriller starts right off with an impressive split-screen montage (eat your heart out 24!) scored by Lalo Schifrin that introduces wealthy befurred Aunt Danny (Eleanor Parker) on her way to the beauty parlor with diamond bracelets on her wrist and oxygen tank in hand. Aunt Danny suffers from debilitating emphysema which does not deter her from allowing dozens of cats to take dominion of her Pacific Heights mansion. One of them sneaks into her limousine and goes with her to the beauty parlor where, underneath the hair dryer, Aunt Danny nearly dies of a coughing attack (possibly because her hairdresser is Mark Herron, Judy Garland's fourth husband; don't blink or you'll miss his cameo). Aunt Danny's delicate condition inspires her beautician Kassia (Gayle Hunnicutt)—to whom Aunt Danny has confided one too many biographical details—to conjure up a plan on how to secure Aunt Danny's fortune when she dies. It's either that or all that money will be left to those yowling cats. Aware that Aunt Danny is pining over her missing nephew Wiley (Michael Sarrazin)—for whom she incestuously longs and for whom she would gladly change her will if Wiley would only come and sit at her bedside—Kassia tracks Wiley down and engages his cooperation in plotting Aunt Danny's demise in exchange for a split of the profits. Sarrazin, the star (you might recall) of They Shoot Horses, Don't They? (another 1969 vehicle) makes you question if they shouldn't actually shoot actors to put audiences out of their misery.

By contrast, Tim Henry—in his screen debut as Wiley's younger brother Luke—steals the show with an erotically underplayed performance. At the time of the film's release Henry was the only one who got anything close to a decent review, probably because with his shirt off and his back shiny with sweat he came thrillingly close to being indecent. It's a pity that in his prime his career didn't quite take off and that he ended up in the Battleship Galactica mini-series and, most recently, the fourth installment of Scary Movie. I won't hold it against him. We'll always have San Francisco in 1969 with Luke bare-chested in the conservatory. 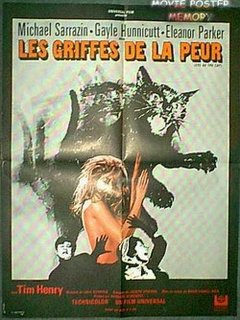 I commend YBCA on securing a pristine print of Eye of the Cat. Not a single scratch (no pun intended) and only about two pops. Amazing. It made me wonder if its pristine condition is commensurate with how many times the film was actually shown? Comparisons to Hitchcock and Sirk are apt, not only as mentioned before because of Stefano's association with Psycho, but as interestingly pointed out by an IMDb member: "The cinematographer on the film was Russell Metty who photographed lots of Douglas Sirk movies and you can certainly see his style. The main set of the movie, the foyer of a large home with a winding staircase, is very much like the main set in Sirk's Written on the Wind and Metty uses the foyer's mirror and a vase of flowers in the same way as the earlier film. And even though ...Cat is set in 1969, it has that distinctive, slick, Alexander Golitzen/Universal Studios look."

Eleanor Parker—like Bette Davis/Joan Crawford in Whatever Happened to Baby Jane? and Olivia de Havilland in Lady In A Cage—rolls up in her wheelchair far behind in Eye of the Cat, not decrepit enough to be amusing, and just plain silly in her affections for Wylie whose thigh she suggestively slaps with splayed eager fingers when he finally does come to sit at her bedside.

But all these years later it doesn't really matter, does it? The gorgeous San Francisco locations around Lafayette Park, the sojourn across the Golden Gate Bridge to Sausalito, the big hair, the cats, and the bitchy cat fights provided for an evening's fun. I'm really glad I got to see this "highly entertaining obscurity."

Heya Mike, you've been tagged. To keep a long story short, a short Malaysian documentary called 18? by Danny Lim had recently been axed (by their own embassy) from the Seoul Film Festival. And well, Amir Muhammad was the one who recommend this short, and was involved in its production as well.

I'm just trying to start a meme and help spread awareness about this issue.

It'll be great if you can participate.

And to get back to topic, hmm, Eye of the Cat seem to reminds me of, well, some rather old-school anime.