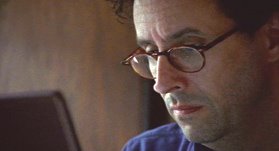 Good friend Emily Hoyer caught Frieda Lee Mock's Wrestling With Angels: Playwright Tony Kushner at its Frameline screening. I had seen the documentary at the press conference but, feeling that—due to its length—it teetered uncomfortably into hagiography, I didn't really have much to say about it. Fortunately, Emily did. "How can you go wrong with a subject like Tony Kushner?" Emily qualified, "but it still exceeded expectations." Emily has been kind enough to share her write-up with The Evening Class.

* * *
Wrestling is an extremely intimate movie—the camera is there at his wedding to Mark Harris, we see him with his bio family, we see him working with [his] composer, we see clips showing him as a flaming little sissy, we see his family's shul and his grandfather's business in Louisiana, etc. Then, of course, there are clips of his commencement address at Vassar, his speech at an anti-war protest, his appearances at a panel about the Wrestling with Zion book, his pep talk at a bank's LGBT group's meeting or Pride celebration, etc.

I have heard Kushner interviewed many times, and saw him speak at the Metropolitan Community Church once, and he always talks very articulately about his process, and what inspires him. But in the movie, you get to be there with him as he's inspired—e.g., when he is working on Brundibar with Maurice Sendak, you see clips from the Nazi propaganda film, and witness one of the few children in the film who was not murdered as she sees a performance of the Sendak-Kushner production. The movie brings you into his heart and conscience, not just his mind.

He mentions in one of his speeches "the ethical obligation not to despair" if you can possibly help it. Fortunately, instead of having Kushner talk at us about saving the world from all its woes, the movie connects us with what inspires him, and with the inspiring brilliance and conscience of his work, so we get as unmediated an experience as possible.

One other note, apropos of nothing: the movie was filmed between 09/11/01 and the November 2004 election. (One of the very last scenes is of him accompanying people in Miami as they try to vote, and helping resolve situations where people were unfairly turned away from polling places.) At the beginning of the film, Kushner was in the midst of working on Homebody / Kabul—and then all the sudden, the U.S. attacks Afghanistan. Toward the end of the film, you see Caroline, Or Change, and you see his childhood home in Louisiana, and what he used to think was the basement. The line, "nobody has a basement in Louisiana" (or something like that), is repeated many times. So watching the movie now, you see all these places and have to wonder if they still exist. Kushner must really have his finger on the pulse of something.

I am glad that this is going to be distributed in the fall, so I will get to see it again. Meanwhile, this makes me want to watch the HBO production of Angels in America again.

* * *
Though Wrestling With Angels was screened only once at Frameline, Bay Area audiences have another opportunity when it screens as part of the upcoming Jewish Film Festival at the Roda Theatre, Berkeley Repertory, on Thursday, August 3, 6:30 p.m. The documentary also won the Lena Sharpe (Audience Favorite) Award at the Seattle International.

Alternate views on the documentary include Sura Wood from The Hollywood Reporter who opines Wrestling With Angels "suffers from a crucial lack of perspective." She cautions that Mock—in getting too close to her subject—has lost her objectivity and reveals "a reluctance to cut her material." The documentary thus comes off "adulatory" and "could well have been titled Ode to Kushner." Notwithstanding, her bottom line is that Wrestling With Angels is an "entertaining doc about what it takes to be Tony Kushner."

"Because Mock is less selective," she writes, "the film drags in spots, despite the playwright's humor, conviction and abundant charm. If nothing else, this is an essay in charisma."

Variety's Robert Koehler states Mock has missed a golden opportunity to appropriately profile Kushner, providing instead "a mild, PBS-style pic more interested in Kushner's busy schedule and good citizenship than his writing."
Posted by Michael Guillen at 7/04/2006 08:42:00 AM