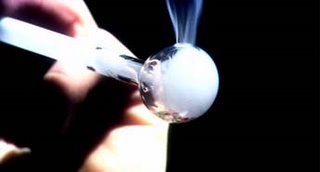 "Recovery is a dominant narrative in our culture," Kent Jones writes for the May/June 2006 issue of Film Comment (p. 34). Though taken out of its Altmanesque context, I felt Jones' comment appropriate to underscore the two Frameline documentary entries on the methamphetamine epidemic among gay males—Todd Ahlberg's Meth and Jay Corcoran's Rock Bottom: Gay Men and Meth.

Introducing Ahlberg's documentary, Frameline's Associate Director Steve Jenkins asserted that, rather than duplicative programming, the two documentaries engage in dialogue. I would agree. Though both are testimonial docs, their combination provides a broader sampling of voices and perspectives on this pressing health issue. As novelist William Goyen might put it: "Had I a hundred mouths, I would tell a hundred stories." Whatever spin you might put on it, or whatever ethical stance you might take on the subject, there's no question that when all is said and done hundreds of voices will be necessary to envoice this season of fire. I'm respectful of both directors' efforts to offer some of the first.

During her keynote address at Frameline's Persistent Vision Conference, B. Ruby Rich noted that—if festivals can be used to reflect the predominant themes of any given year—this year's theme might be gay males and methamphetamine use; a sad and unfortunate fact. It is still a divisive subject and, though some consensus has been reached about the havoc meth use has wreaked among individuals and—by extension—the community, what's do be done about it is still very much a personal issue and up for debate. It reminds me of the arguments around the closing of the bath houses during the AIDS pandemic. When Jenkins noted that the screening of Meth was co-presented by The Stonewall Project—which through its website tweaker.org advocates harm reduction strategies—the concept of harm reduction was applauded. This signals conflicted attitudes within the community about how to best resolve or ameliorate the volatile issues surrounding "tina" usage.

Of the two, I felt Rock Bottom more effectively chronicled the damage of meth on individual lives. By interviewing individuals in the hospital and individuals denying the gravity of their use shortly before their deaths, Corcoran effectively demonstrated the true danger of extended meth use. The talking heads in Meth, on the other hand, seemed to be stationed before that juncture, concerned more with whether or not to stop or ratchet down use. Whereas the self-denials evident in Rock Bottom proceeded towards deteriorating health and death, the self-denials in Meth came across as familiar and almost comical. The audience laughed whenever a user claimed he had his usage under control. This disturbed me and reminded me of an insight I gained when I saw the Jean Cocteau retrospective in Paris. One of the rooms of that exhibit was devoted to Cocteau's addiction to opium. The thrust of that display was to emphasize Cocteau's cycle of use and recovery, use and recovery, which pertains to how many men grapple with their meth use, and why harm reduction is in favor rather than complete withdrawal. A truth made all the more disturbing by anecdotes of men who go to recovery groups only to make sexual contacts and find new sources of speed.

Without question, from the benefit of distance, future historians will look back at this time—much as I look back at the '70s when it seemed there was a concerted effort to make gay males alcoholics—and recognize that when cultures marginalize individuals and damage their self-esteem, they create a breeding ground for substance abuse of one form or another. Meth has revealed the obvious. Despite decades of human rights and legislative advances, some wounds have yet to be healed.
Posted by Michael Guillen at 7/04/2006 09:58:00 AM