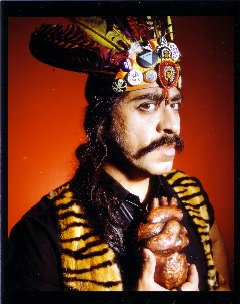 My thanks to Sherry Koyama and The LAB for letting me take part in the inaugural tour—El Corazón de la Missión—with Guillermo Gómez-Peña and La Pocha Nostra. Gómez-Peña brings his "border spectacle" to the heart of the Mission, with an 80-minute audio tour aboard the Mexican Bus. Consummate wordsmith, Gómez-Peña recontextualizes language—one might say disembowels it—to pull out its steamy entrails. His prophecies from there are anyone's guess. His perceptions of the Mission—even a Mission you might know very well—are singularly if not startlingly unique. Embarking and disembarking at La Galeria de la Raza, Gómez-Peña asks important questions: why is the Mission so much warmer than the rest of the city? Is it because of the 700 taquerias? Is it because Latinos have more sex?

Assisted by the seductive adminstrations of La Missionera Alma Raddha (who tried to lure me into the men's room to sample her lilac/chipotle cream, assuring me she always carries her strap, and offering to spank me for $5, or to let me spank her for $15; pity I didn't have enough money to fulfill myself), the audio tour guides you through the 24th Street corridor to 24th & Mission, "one of the four vortices of Hell", on to Clarion Alley (which serves as a metaphorical border crossing), Mission Dolores, the Red Building at 16th & Capp ("the urban sphincter of San Francisco"), and other infamous locales in the Mission. On my tour there was even an impromptu invasion of a local immigrant bar where women were afforded the chance to dance with Latino strangers. The tour gives you more value for your money and is probably best experienced "wet" than dry (i.e., with shots of tequila).

The Mexican bus, a rolling cultural artifact in itself, was inspired by drivers who were confined by economic necessity to their buses up to 16 hours a day. To cope, they surrounded themselves with expressions of their personal lives, creating mobile "homes away from home"—unaware that they were making art. These unique collections juxtaposed cultural artifacts such as images of Cristobal—the patron saint of bus drivers— with pictures of admired film stars, wrestlers and favorite musicians. Colorful lights, lush interiors and music selected by the drivers, along with the occasional live troubadour, created a complete environment and experience for those boarding the bus. Gómez-Peña and La Missionera make this artistic expression all their own.

One of the most Brilliant Artists of all time!