A brave—if challenging—new programming initiative at the 2013 Sun Valley Film Festival (SVFF) were the three works-in-progress featured in a separate sidebar: Wind Walkers, The Unkindness of Ravens (both steered by Russell Friedenberg) and Children (directed by Jaffe Zinn, last year's Gem Award winner for Magic Valley). As George Prentice wrote in his piece for the Boise Weekly: "It's a film fan's dream and a reporter's nightmare. While buffs are getting a sneak peek at films before they are 'locked' and ready for distribution, it's an agreed-upon prerequisite that journalists aren't invited to the screening. And if they do attend, filmmakers beg them not to critique a film that is far from finished."

Though I recognize the value added to an audience of film buffs to have an opportunity to participate in the evolving formation of a film via their direct or indirect feedback, I'm not as enthusiastic about the outcome of this exercise as was Prentice and, admittedly, that's perhaps because I was frankly insulted by the no-journalists-allowed policy, which I immediately contested. Has SVFF never heard of a "hold review" policy, which any professional journalist is entrusted to uphold? Violation would mean the revocation of credentials, plain and simple. In this day and age it's not accredited journalists who are the threat, but all those individuals in the dark who are free to post whatever they want online and who have nothing to lose by doing so. Thus, this fear of and animosity towards journalists seemed to me wholly unwarranted and unfair. At any rate, it doesn't matter since I'm not allowed to say anything specifically about the films, which I won't.

However, at the coffee talk where Russell Friedenberg, Randy Redroad (co-director on Ravens), and Jaffe Zinn—along with Jesse Millward (the director of this year's Gem State Award winner Craters of the Moon)—held an on-stage conversation with their SVFF audience, the conversation obsessed over Idaho film production rather than the programming initiative of the works-in-progress themselves, so I finally felt compelled to interject this question: "This is a brave step for each of you to expose an early version of new work to your audiences. Can you speak to what that experience has been like for you?"

Zinn immediately joked that he was terrified. SVFF Executive Director Teddy Grennan contextualized that the work-in-progress screenings were valuable, if at the same time a "double-edged sword" and he mentioned how difficult it had been to convince Zinn to come to the festival with an unfinished film (which Zinn admitted to me during a sidewalk conversation that he wasn't sure was even a film yet). Zinn added that "to a degree" he ordinarily will only show his work early on to a select few for feedback. Up until even a week ago he hated his film. He related that frequently during editing filmmakers will feel their film is the worst thing ever even as they chip away and form the film; but—in terms of Grennan's metaphor of the double-edged sword—a work-in-progress will show you not only what isn't working, but also what is working, especially if you can get similar notes across the board. That can be helpful. Notwithstanding, Zinn admits it's nervewracking.

Redroad agreed that he and Friedenberg hated their film a week ago too, but he considered it a natural reaction for a director to hate their movie until, hopefully, they don't. They had already had several "little" screenings with audiences of sometimes no more than 4 people, sometimes 10. They had a screening in Beverly Hills of around 35 people, composed of world-class directors and editors, which he qualified was a different kind of audience. But he was looking forward to feeling the energy of an audience of 200-300 people, even if it was terrifying. Because of the internet and how fast news travels, he and Friedenberg didn't want to create an ambiance around a work-in-progress that it's a finished film when it's not, nor expose it to an audience who won't fairly allow for its incompletion. It was essential for him that the festival provide discretion, even as it offered a private-public event. After thinking about the film repeatedly over time, he now wanted to feel how it went with an audience. He wanted to feel their reactions.

Friedenberg brought it home. He said, "I think you have to just kick your kid out of the house at some point and let your neighbors tell you if they're screwing up or not. Films are representative of who we are as filmmakers." He admitted that he invites people to test screenings who he assumes will hate the movie whereas Redroad invites those who will love the movie and—during such a screening—he doesn't watch the movie; he watches the people watching the movie. He moves seats to be near the people who hate it the most because he's fascinated in why they hate it. Feedback from people who love his films doesn't help him as much as feedback from people who hate it and he'll ask them why and maybe they aren't articulate about why they hate it but eventually they'll communicate some nugget of what wasn't working for them "and there's always gold in that." In the final analysis, Friedenberg said you have to get over your own ego if you want to make the best film you can, and therefore you have to get as much feedback as you can.

To that effect, I've transcribed a conversation I had with Dave Jones, the actor in Brian Goodwin's short film PB&J, as to his thoughts on Jaffe Zinn's Children, along with his reaction to attending SVFF. 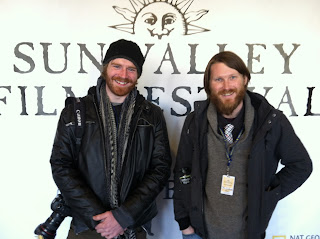 Michael Guillén: Dave, you've come all the way from the East Coast to attend the Sun Valley Film Festival. What drew you?

Dave Jones: Brian Goodwin, my director, worked as an art director on Magic Valley, which is a beautiful film. I love Jaffe Zinn. I love his vision. Did you see his work-in-progress Children? Oh my God! What I love about Jaffe Zinn is his patience, his cinematography, and his willingness to let a scene breathe and to show the beauty of the environment paired with the beauty of the subject matter of his actors. I love his ability to give a scene space to show that these places, and these people in these places, are beautiful in and of themselves. You can still weave a story and say and do what you want to do, but there's something about his nuance, and how he makes his frames, and has the patience to let something speak for itself that really draws me to Jaffe Zinn's films.

Granted, I am slightly biased because my sister was a production designer on Magic Valley; but, I was genuinely drawn to Children. I think it's a fantastic film. It's interesting, it's thought-provoking, and it's one of those films that I talked about more than any other film because it brought up questions and different conversations throughout the day hours after we'd seen it. We just kept bringing it back up. Any time a film lingers and any time a film makes you think about it so that three hours later you're like, "You know what's interesting? I love the fact that he used subtitles." That tied into this abstract scripture idea that he brings in and this tension between religion and morality and isolation: all these ideas! All I'm saying is that it was thought-provoking and there is nothing better than leaving a movie that stays with you.

Guillén: So it was just Zinn's work that brought you to Idaho?!

Jones: Well, let's be honest here. I was in a short film PB&J that was accepted into the festival. It was directed by Brian Goodwin. I was in it. But I'd heard a lot of good things about Idaho. I'm a photographer as well. I love taking pictures of beautiful places. I'd seen a lot of beautiful photography from Idaho. I'd seen Magic Valley. I thought I would love the chance to be in a new place, new topography, new cinematic expanses and I heard that Brian got into the festival. I didn't commit to coming to this festival until two days before because I was working in New York on another project that I had with the university; we were building a set for them. But I'm glad I came because I love this festival. Because it's so new, it feels like a purer thing. It's beautiful. People who appreciate film for what it is. It doesn't feel commercial like other festivals I've been to.

Guillén: Which other festivals have you been to?

Jones: I've been to Toronto. Obviously, Tribeca. I've built a lot of things for films at Sundance, though I've never actually been there. I've sent a lot of corporate sponsor product to Sundance. I was supposed to go to South by Southwest for two different vendors but—after I shipped them out—I didn't show up. I don't always show up for every corporate event.

Jones: No, mainly prop building and set building and design. We're a design-and-build shop. I do both of those things; but, with Mashed-Up—the company we started with Brian Goodwin—we have started a production company. Just last Friday, we shot fashion spreads for an Indian jewelry designer. I do stills. I do video. I make movie sets. I make props. And special effects. Anything film-related, I love to be a part of.

Guillén: So would you come to Idaho to do your projects?

Jones: Absolutely! The main draw for me with Idaho, besides the people who are absolutely lovely—everyone I've met has been excited about the prospect of making film or making art—so, beside the people, the topography is gorgeous. From a filmmaker's perspective, the production value you get just by pointing a camera in any direction is amazing. The color palette here is amazing! The greens, the browns, the texture, random outcroppings from glaciers that came in and deposited these random rocks that make no sense but have made layers of texture and a beautiful background palette that has been mindblowing to me. In fact, tomorrow I'm just going to wander up north because I hear that if I see the Sawtooths I'll be floored, and I'm already floored! I want to explore the state and I love the prospects.
Posted by Michael Guillen at 3/21/2013 09:39:00 PM