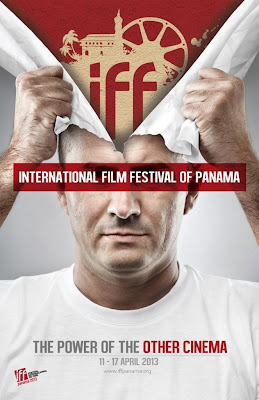 Whereas the regional cinema of Idaho earnestly sought a national stage at the 2013 Sun Valley Film Festival, the upcoming International Film Festival Panamá (IFF Panamá) inverts the strategy and bolsters the somewhat neglected national cinemas of Central America through a regional sidebar that stretches from Guatemala to Panama, providing strength in solidarity by way of a select sextet of films. Thus, "regionality" in and of itself becomes a flexible term to be understood appropriate to scale and purpose; which, remains at heart, the desire for films to reach their audience.

Among IFF Panamá's sidebar "Stories From Central America" are two co-productions from Guatemala whose film industry—according to an informative report by Antonio Ordóñez for Infosur Hoy—is "soaring." Without government support, Ordóñez contextualizes how it has become necessary for Guatemalan filmmakers to seek co-production with Mexico and neighboring Central American countries to offset their lack of resources. "Still," Ordóñez writes, "the country's movie industry is experiencing a boom in the number of films produced compared to other Central American nations, as Guatemala finished 17 movies the past two years. Costa Rica, for example, has released 14 movies since 2003." Which is surprising, Ordóñez further observes, because "movie companies in Costa Rica are supported by the Costa Rican Center of Film Production, which is backed by the Ministry of Culture and lends equipment, offers training to filmmakers and organizes festivals with its annual budget of US$500,000." Guatemala's government offers nothing of the sort.

Perhaps the most disconcerting insight from Ordóñez's piece for Infosur Hoy is the well-recognized colonizing grip Hollywood's hegemony continues to exert on global filmmaking. As producer Cecilia Santamarina states it: "The public is not used to seeing national films, and the collective consciousness is alienated because of the foreign productions, which are very expensive to film and promote." Guatemalan films simply can't compete with Hollywood's tent-pole spectaculars, which are considered "better" by the average Guatemalan moviegoer precisely because of their expensive special effects. Countering that misperception, Michelle Rojas—who specializes in advertising photography for films—asserts that Guatemalan films "show our national reality, how people live their daily lives." 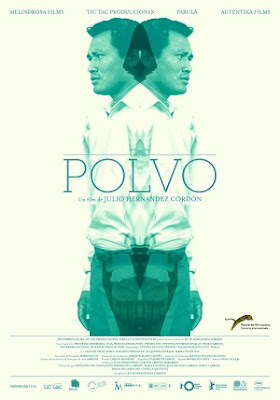 The allure of the quotidian has in recent years all but defined art house cinema in the international film festival circuit, to both good and ill effect. The simplicity of these narratives belie not only compromised quests for national identity, but bravely oppose the impatience of critics who can't be bothered with rhythms and paces that are, at heart, local stories rendered through limited means. Take, as example, Variety's dismissive review of Julio Hernández Cordón's recent narrative feature Polvo / Dust (Guatemala / Chile, 2012) [official site], which basically asserts that the press notes tell more than what's seen on screen. I can't speak to this (unidentified) reviewer's complaint but look forward to deciding for myself what I think of Cordón's latest, as I am a fan of his earlier films Gasolina (2008) and Marimbas From Hell (2010) and admire his grasp of opportunity—he's made three films in five years—with his latest being a co-production between Guatemala and Chile administered through the Spanish company Tic Tac Producciones.

Issues of limited production value and "pseudo-poetic evocation" (Variety) aside, I am intrigued by the curatorial responsibilities of a film critic, or more specifically, the role of the programmer as critic. There's no question in my mind that film curation is a form of film criticism, anticipatory and proactive, in contrast to the reactive practices of film reviewers. It's all messily necessary, of course, pro and con, so I'm not really trying to pit one against the other. However, using Polvo, again, as an example, the film had its world premiere at the 2012 edition of the Locarno International Film Festival where Mark Peranson observed in his program note that "Julio Hernández Cordón has found an original path into exploring the contemporary aftereffects of civil unrest" by structuring his film on the intersection between two somewhat parallel individuals, "one who subsists in anguished purgatory, the other who seeks to understand it—but is bound to fail." Peranson promoted Polvo as an "unsettling and at times disturbing work that bears scars from its making" and asserted the film was "about the unremitting desire for vengeance and the inability to escape the past—especially when you're confronted with it every day." Polvo was nominated for Locarno's Golden Leopard. 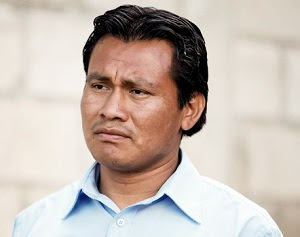 Polvo then had its North American Premiere in the Contemporary World Cinema sidebar at the 2012 edition of the Toronto International Film Festival where Diana Sanchez noted: "The traumas of the past retain their grip on the present in Guatemalan director Julio Hernández Cordón's harrowing yet moving Polvo, where death is both irrecoverable loss and potential regeneration. ...The relationships that Polvo traces—between parents and children, between lovers current and former, between the living and the dead—create a web of complex emotions, while [the] film within the film attests to how cinema can contribute, however modestly, to a country's long and arduous process of healing. Cordón and his collaborators bring us a few steps closer to understanding how that process moves forward—at times painfully, at times tragically, but with an enduring patience, great tenderness, and an unyielding resistance to forgetting."

After its U.S. premiere at the Miami International Film Festival, Polvo went on to win the Grand Prix du Coeur at the 25th Cinélatino Festival in Toulouse, France, mid-March 2013. At Cineuropa, Gonzalo Suárez López responded that Cordón had delivered "a raw drama about the wounds of the Guatemalan people, still fresh after the civil war" and shown "how a small and humble people has been destroyed by proceeding like a documentary filmmaker within his fictional story."

Mercedes Moncada Rodríguez's Palabras mágicas / Magic Words (Mexico / Guatemala / Nicaragua, 2012) complicates the definition of a national cinema by the sheer fact of its co-production, though its persona resides dramatically in Nicaragua. Described by IFF Panamá as a "highly personal, poetically suggestive essay film about Nicaragua's history from the Sandinistas rise to power onward", Palabras mágicas "underlines how the Revolution and the subsequent government, rather than usher in a wave of radical change, simply offered proof to the notion that history is destined to repeat itself."

From Cuba comes writer-director Carlos Lechuga's feature debut Melaza / Molasses (2012), described by IFF Panamá as "a sharp examination of things we do for money when our options suddenly dwindle" and "a satirical survey of a country mired in bureaucracy, one whose sense of glory derives from an era that had passed before the film's central characters were even born." Breakfast With the Famous conducted an informative video interview with Lechuga when he was in post-production for Melaza. A short year later, Maya Quiroga attended the world premiere of Melaza at Havana's International Festival of the New Latin American Cinema and interviewed Lechuga for Cuba Now. Estela Ferrer Raveiro favorably reviewed the film for On Cuba, emphasizing its bittersweetness. Melaza then had its North American premiere at the 2013 Miami International, where Andres Castillo stated: "Carlos Lechuga's film focuses on character development and script, giving the story a deep and tangible feel about a couple’s struggles through hard times and their faith that love will get them through. Lechuga brings to the screen a rare glimpse of rural Cuba, and the stunning scenery plays a role in helping to create the film’s reflective sensitivity." Festival Scope provides Lechuga's Director's Statement.

I also highly recommend Victoria Burnett's survey of the impact of digital technology on contemporary Cuban cinema for The New York Times, wherein Lechuga told Burnett that independent movies were nourishing a conversation among Cubans keen to see the hard realities of their lives dealt with on screen. But even with the technology much more accessible, filmmakers must struggle to get their work seen. The film institute controls Cuba's theaters; Internet access remains rare, expensive and too slow for downloading movies. Instead, Cubans pass around DVDs. 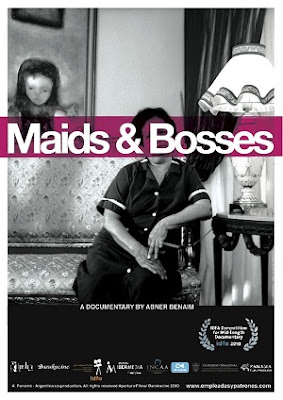 IFF Panamá proudly completes its "Stories From Central America" with three Panamanian productions. I was introduced to local hero Abner Benaim's work at last year's edition of IFF Panamá when they screened Benaim's fierce comedy Chance where Toña and Paquita, the housekeepers for the aristocratic González-Dubois family, revolt and take charge. Benaim approaches the subject matter again, this time as a documentary with Maids and Bosses (2010), described as "a sensitive social study of an institution all too often taken for granted." Maids and Bosses uses candid interviews and reenactments to form a critical exploration of a sometimes uneasy and unfair business arrangement—one found in homes all over Latin America.

Cribbing from IFF Panamá, Ana Endara Mislov's Majesty (2013) is a playful yet critical exploration of a singularly Panamanian phenomenon that ushers the viewer into the spectacular, strange and stressful world of beauty ceremony. An integral part of Panamanian folklore, beauty queens symbolize the festive aspect of Panama's national spirit. But they also promote a very particular, potentially troubling idea of womanhood. 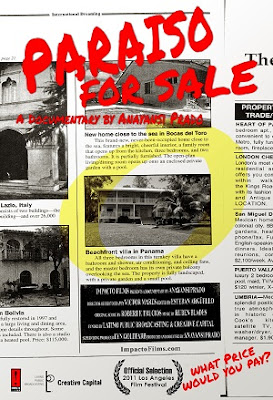 In co-production with the United States, Anayansi Prado's documentary Paraiso For Sale (2012) focuses on how Panama's Bocas del Toro archipelago has been transformed over the past decade into a magnet for foreigner retirees and developers seeking cut-rate property in an (as-yet) unspoiled paradise. Is Panama witnessing a new kind of colonialism? Panamanian-born director Anayansi Prado's Paraiso For Sale offers an unflinching gaze into this troubling development.

Dispatching to Slant / The House Next Door from the 2011 Los Angeles Film Festival, Oscar Moralde resoundly praised Paraiso For Sale as "a master class in structure that takes Bocas del Toro and lenses it through different strata: the native resident Feliciano fighting for indigenous rights to the land, the political hopeful Dario running for mayor on a platform of resisting transnational exploitation, and the American expatriates Karan and Willy, who've made their retirement home in the province." Moralde adds: "Its structural and systematic approach recalls the best elements of investigative journalism in showing how the pieces all fit together and how they all matter." At Plume Noir, Fred Thom credits the documentary "for successfully doing its job when it comes to sensitizing public opinion and carrying its message across the world, on the festival circuit. Let's just hope this will help the likes of Feliciano and Dario in their attempt to save their beautiful and peaceful world from another brutal capitalization."
Posted by Michael Guillen at 3/31/2013 12:35:00 PM