FROM UP ON POPPY HILL (2011): Nostalgia For the Future—By Frako Loden

For those (like me) weary of CGI fantasy and 3D effects, the latest animated film from Ghibli Studios is a fresh sea breeze scented with flowers. From Up on Poppy Hill (2011), Gorō Miyazaki's second film after his 2006 Tales From Earthsea, was written by his father Hayao Miyazaki, who adapted the story from the 1980 serialized shōjo manga Kokurikozaka Kara (From Coquelicot Hill) by Takahashi Chizuru and Sayama Tetsuro. I haven't had a chance to check out this manga, so I can't compare it to the film’s remarkable and loving attention to period detail. Its painstaking, hand-drawn backgrounds are far more fascinating than special effects for me, who lived in Tokyo in the early 1960s.

Unlike other recent animation, From Up on Poppy Hill nudges viewers, if they're so inclined, into a more thoughtful exploration of Japan's ambivalent relationship with the rest of the world. Its geographical setting, the city and port of Yokohama, already implies a globalism ahead of the rest of the country since it was designated an international harbor in 1859, in response to Matthew Perry's forcible opening of Japan to Western trade. The film's era is the go-go early 1960s, when Japan was pulling out of its post-World War II gloom and lulling urbanites with the corporate salaryman's job security and "my car" ownership. The 1959 televised wedding between Crown Prince (now Emperor) Akihito and the commoner Michiko caused first-time purchases of televisions to explode. The prospect of the 1964 Tokyo Olympics, and the innovative construction work being done in preparation for it, invited the Japanese to think of themselves as entering the elite stratum of world-class countries. It was a status fervently desired since the mid-1800s.

But the desire was mixed with fear of contaminating the "pure" Japanese essence. In the country's consciousness and cinema, Yokohama has been the site of miscegenation, or the taboo mixing of blood. Western foreigners were initially restricted to a special area of the city, but they were gradually allowed to occupy hillside lots up to the Yamate Bluff and other upscale neighborhoods. Chinese immigrants formed a vibrant Chinatown below. (The ambivalence toward these two "contaminated" sites is epitomized by Kurosawa Akira's 1963 High and Low, in which the rich shoe manufacturer living on the Bluff becomes the target of a kidnapping by the poor junkie who loiters around Chinatown below.)


Both the celebration of Japan's internationalization and wariness of scrambled families as a result of international events form the subtext to this cheerful teen love story. Here the olden days are already Westernized. Umi ("ocean" in Japanese) is a teenage girl who runs a hillside boarding house in a Western-style building, formerly a hospital from the turn of the 20th century. Her mother is studying medicine in the US, and her late grandfather was a doctor. Her father, the captain of a supply ship, was lost at sea when the ship was hit by a mine during the Korean War. Umi has raised signal flags out to the harbor every day of her life, hoping her father will return. 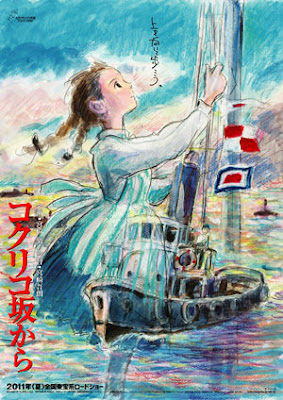 Another old Western-style building, this one dilapidated and unkempt, is further up Poppy Hill and serves as Umi's high school clubhouse called the Latin Quarter (with the Japanized name Karucheratan), where fanatical male students run organizations like the Philosophy Club, Astronomy Club and Literature Club, the last of which publishes the weekly high school newspaper. Its editor and rabble-rouser-in-chief is Shun, who organizes happenings to rally support for keeping the building from being razed by the high school board chairman, a Tokyo developer. Shun's father is a tugboat operator who confirms that he adopted Shun when a fellow Navy shipman couldn't raise the infant. Shun and Umi, working together at the newspaper and developing feelings for each other, are disturbed when a man in a photograph is identified as the father of them both.

Unusually for teenagers, both Umi and Shun are associated with their city's past, both in the buildings they cherish and the mystery of their birth origins. In a school debate where the opposition says buildings like the Latin Quarter must be demolished to make way for a new future for Japan, Shun leaps onto the stage and shouts, "You cannot move into the future without first knowing the past!" Umi anxiously awaits the return of her mother, her inspiration who dared to elope with the man she loved (Umi's father) and has spent her life studying to be a doctor. The Miyazakis have portrayed a past that is a Westernized promise of internationalization and progress. Maybe it's a fond wish of seventysomething screenwriter Hayao Miyazaki, and fortysomething director Gorō, for new generations to look back on a past that was already eager to embrace the future.