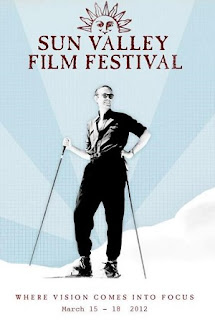 In early January, the Sun Valley Film Festival (SVFF) actively sought submissions for its new Hot Shot film category dedicated to filmmakers under age 18. Films of any type, feature, documentary, or short were welcomed. "We wanted to support and encourage young filmmakers on their journey into this business," said Ted Grennan, Executive Director of SVFF, "so we added the new Hot Shot film award category this year to recognize their efforts." Grennan confirmed when we spoke that SVFF tried to model the spirit of the festival on the family-friendly spirit of the Valley.

Of the 13 entries accepted into SVFF for the Hot Shots line-up, Skating Partners and Time Travelling Kids were from Ketchum's Hemingway Elementary School, so I phoned Teacher-Advisor Scott Slonim to congratulate he and his Fifth Grade Class on their achievement.

Scott Slonim: Thank you!  The kids are so excited.

Slonim: We're part of the Blaine County school system, which includes four elementary schools between Bellevue, Hailey and Ketchum, and there's a fifth one a little farther away in Carey.

Guillén: Is this student filmmaking program common to all the elementary schools or particular to Hemingway?

Slonim: My class is named "Engineering Technology" and so I get to teach all the kids in the school from kindergarten through Fifth Grade. The Engineering Technology curriculum is broad. There are so many different things a student can do. They can pick something and if it fits they can go deeper into it. But to answer your question, all the schools do video of some sort.

Guillén: You're in charge of this activity at Hemingway and it sounds as if you've enthused your students in such a way that they're producing competitive product?

Slonim: It's available at all the schools but at Hemingway we tend to do the video well; whereas at Bellevue they tend to a little more NASA.

Guillén: How long have you been with Hemingway?

Slonim: This is my eighth year.

Guillén: And how did this program get started with you at the helm?

Slonim: During my first year at Hemingway, Picabo Street (the Olympic gold-winning skier) was doing commercials for Chapstick and she heard about a program called Panasonic Kid Witness News (KWN) and asked, "Why isn't my school in this program?" This program had a long waiting list to get into but suddenly we were being called up and asked if we wanted to be in it. So Picabo helped our school get involved with Panasonic who gave us a camera, a microphone, and some other equipment and invited us to be in their program. The next year we made our first videos. I'd never made a video before. I really didn't know what I was doing.

Slonim: It was fun. The kids made three different videos that they wrote and produced. They did everything; all I did was oversee the project. We won one of the categories in the Panasonic contest and that took us to New York City, paid for by Panasonic. That's when we started entering contests.

Guillén: So you've been submitting videos into contests across the country?

Slonim:This is our seventh year entering the KWN contest. As I find other appropriate film contests for my students, we'll either make a new video to enter or use an old one that's already made and submit that one. The year after we won KWN, we made a video for a site called eSchool News and we won that one as well, which allowed us to take three girls to Washington, D.C., paid for by eSchool News.

Guillén: So you are consciously using these video technology tools to teach these young kids community outreach? And teaching them how to build community?

Slonim: Yeah. Basically, in my class my Third Graders design and build toys in small groups. They'll write a commercial for it, we'll film the commercial, and then they'll learn how to edit it in iMovie. My Fourth Graders make recycled commercials by doing the same process. My Fifth Graders made videos to compete in KWN, but they don't do it during school. They make them during lunch recess, before school and after school. They have to actually apply to do it.

Guillén: How did Hemingway Elementary become involved with the Sun Valley Film Festival?

Slonim: One of the films that SVFF accepted—Time Travelling Kids—was one of the top three finalists for Boise State University, as part of the Idaho Leaf Project. The other film SVFF accepted—Skating Partners—was made for KWN, but KWN only accepts one video and we had made three, just because the kids wanted to do it. What we do in that instance is that the whole school watches the videos and then they vote on which one goes to KWN. I actually entered all three of those videos into SVFF and they chose Skating Partners.

Guillén: That's great. I have to commend you on this project, Scott. It's a wonderful way to teach children to express themselves. Are the Hamilton Elementary videos available for streaming online?

Slonim: Yes, they are. If you go to the Blaine County School District's website, on the left there's a tab where you can select EduVision.TV, which will bring you to all of the schools' videos. Towards the middle of the page there's a drop-down menu where you choose Hemingway Elementary and it will bring up all of the videos made by my students.

One other thing: we also do a live news show every morning at 8:00 that's broadcast live to the internet. We have green screen and different cameras and the kids run and produce the whole thing. If you go to the Blaine County School District website and select Hemingway, you can watch our live news show.

Guillén: My goodness! You have these kids on career track.

Slonim: Well, what I like is that it gives them an experience with public speaking. They become camera-comfortable. There are kids in the Fifth Grade program who at the beginning of the year say they only want to be behind the camera, but after they watch the show one time they're like, "Can I be Anchor One?" So if you have a chance, watch it. It's a lot of fun.

Slonim: Well, thank you very much for including us in your coverage of the festival.