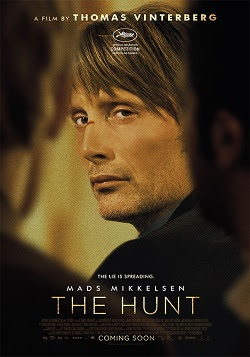 Not only did Tobias Lindholm direct A Hijacking, but he also co-wrote Thomas Vinterberg's The Hunt (Jagten, 2012), which won the Ecumenical Prize at the Cannes Film Festival as well as the Prix d'interpretation masculine (Best Actor) for Mads Mikkelsen. The witch hunts of Arthur Miller's The Crucible are contemporized to chilling, horrifying effect in The Hunt, wherein kindergarten teacher Lucas (Mikkelsen) is falsely accused of molesting the children. The feel of the film is like the moment in Shirley Jackson's The Lottery when the villagers begin to pick up rocks, ravenous for a scapegoat. A powerful central performance by Mikkelsen, bolstered by a strong supporting turn by Thomas Bo Larsen as his disloyal friend Theo, plus a steady-on-course script deliver a harrowing of hell, where hell—as Sartre opined—is other people.

Betrayed by friends, betrayed by his community, Lucas faces the mob mentality with angered, nearly Messianic integrity. It's easy to see where the legend of St. Eustace has reinforced the equation of the persecuted Christ with the hunted deer, especially when Lucas stares down his friend Theo (during mass no less) who then guiltily admits to his wife, "I can see it in his eyes." As the legend goes, Eustace saw Christ's eyes in the eyes of the stag and a cross appeared between his antlers. As if that's not enough, Vinterberg aims straight to the religious core of the symbol in the film's final unsettling sequence. 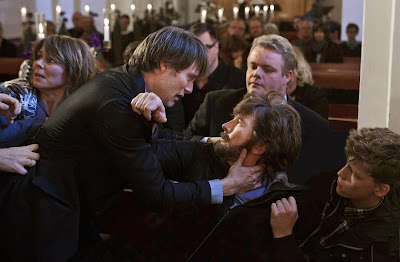 But as with most legends where moral imperatives one-up rational concerns, The Hunt kept reminding me of Kiyoshi Kurosawa's purposeful exclusion of law enforcement in several of his films in order to allow chaos. Once it's been proven to the police that Lucas is innocent of the charges levied against him, why is he offered no protection? Why is the community allowed to physically persecute Lucas? There's only one answer: because Vinterberg is purposely preaching to a righteous choir.

At Fandor, Dave Hudson gathered up the reviews from Cannes, and subsequently from Toronto, where all rightly praise Mikkelsen's performance while qualifying the narrative's originality. I might add the Danish Film Institute's interview with Vinterberg and their profile of Mikkelsen. IMDb. Wikipedia.
Posted by Michael Guillen at 1/17/2013 10:31:00 AM