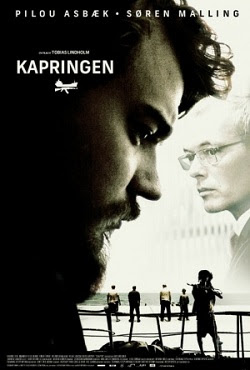 A radio dispatch to corporate offices announces that Somali pirates are boarding their ship The Rozen early on in A Hijacking; thereby stating Lindholm's stylistic parameters, eschewing an action-packed Hollywood-style depiction of the hijack in favor of a controlled focus on what he considers the true drama: the ensuing four months of nerve-wracking negotiations to free the crew. Tensely paced, the film offers a sober glimpse into how such hostage negotiations are conducted, and observes the escalating stress levels both on The Rozen and back in Denmark at corporate headquarters where the ship's CEO (in a crisply-restrained turn by Søren Malling) takes it upon himself to ratchet down the ransom to something his board of directors will accept. A Hijacking places a necessary human face on these negotiations and determines that—though the cost of a human life can be calculated and laid out on a meeting room bulletin board—the long-range expense of demoralized psyches to the individuals involved is inestimable, especially with regard to their personal choices. Cocky at first about his brinksmanship, CEO Peter Ludvigsen (Malling) is whittled down to a slivered stick as the months progress. On The Rozen, the ship's cook Mikkel Hartmann (Johan Philip Asbæk) struggles to maintain his faith that he will ever see his wife and child again, and through his own seemingly innocent choices propels the hostage scenario to its climax. Compelling and intense, A Hijacking confirms Danish skill in eliciting psychological complexity within genre filmmaking, which their American counterparts—reliant on pyrotechnics—can't even begin to touch. 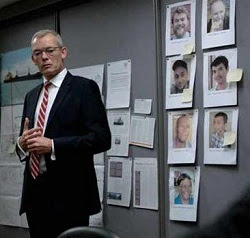 At Variety, Guy Lodge asserts: "Hostage thrillers are all-too-often shrill affairs, with clock-watching screenwriters wringing maximum melodrama from spiraling disorder. Not so Tobias Lindholm's superb A Hijacking, which actually grows more chillingly subdued as its nightmare scenario unfolds. A fictional but sweatily plausible account of a Danish cargo ship ambushed by Somali pirates in the Indian Ocean, which alternates between tensions onboard and in the Copenhagen negotiation chamber, it's a formidable sophomore feature from the already accomplished writer-helmer." At The Hollywood Reporter, Neil Young adds: "Lindholm again collaborates with key personnel from R [aka R—Hit First, Hit Hardest, (2010)], chiefly cinematographer Magnus Nordenhof Jønck and editor Adam Nielsen, in a production which exudes impressively steely control on all levels. We shift back and forth between the sleekly modern Copenhagen office-suites and the Rozen, the below-decks atmosphere on the craft turning miasmic as the men cope without access to basic hygiene facilities." At Screen Daily, Mark Adams deems A Hijacking "a masterful exercise in building the tension, never resorting to quick dramatic tricks and keeping the tone appropriately serious as the clock keeps on ticking." At Filmmaker, Michael Nordine concurs: "The result is as engaging as it is docu-realistic, a triumph of both suspense and restraint." At FILM, Per Juul Carlsen interviews Tobias Lindholm.