"I do not like to be called a samurai, but I admit that I have an image of myself as a fighter. I would like to fight against all authorities and powers."—Nagisa Oshima (1932-2013) 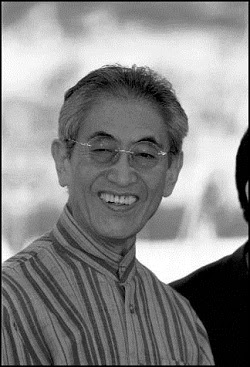 In the vast hierarchy of remembrances, I can't help but wonder if Nagisa Oshima's countenance will be included in this year's Oscar® memorial reel? It would be a crime against the senses, if not. Would I have even become familiar with Oshima's work had it not been for James Quandt's traveling retrospective "In the Realm of Oshima", which venued at Berkeley's Pacific Film Archive in the Summer of 2009? More importantly, would I have gained as much insight into Oshima's films without Quandt's informed introductions to several of the films in the series? I think the answer is evident.

On the sad occasion of Oshima's death, I revisit The Evening Class vaults.

James Quandt's PFA introduction to the "In the Realm of Oshima" retrospective.

My interview with James Quandt, parts one and two.

My wrap-up of the PFA retrospective.

My reiteration of the homosexual themes in Merry Christmas, Mr. Lawrence.

As for the current outpouring of remorse and appreciation around the globe, I turn as I always do to Dave Hudson's comprehensive compendium of write-ups and obits, hosted at Fandor.
Posted by Michael Guillen at 1/15/2013 11:30:00 AM