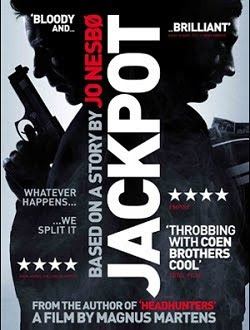 Variety's presence is felt throughout the Palm Springs International Film Festival (PSIFF), no less through several of the program capsules cribbed from Alissa Simon's reviews, along with Boyd van Hoeij's seminar on film criticism, but most importantly through the invitation-only luncheon honoring Variety's "10 Directors to Watch", which this year likewise celebrated David O. Russell with Variety's Indie Impact Award.

Variety's "10 Directors to Watch" debuted in 1996 and the annual event moved to PSIFF in January 2011. It was the first of Variety's "10 to Watch" series spotlighting the most exciting new talents in the fields of directing, writing, producing, acting, cinematography and comedy. This year's "10 Directors to Watch" included: Haifaa Al-Mansour (Wadjda); Wayne Blair (The Sapphires); John Krokidas (Kill Your Darlings); Tobias Lindholm (A Hijacking); David Lowery (Ain't Them Bodies Saints); Jon Lucas & Scott Moore (21 and Over); Andres Muscietti (Mama); David Ondricek (In the Shadow); Joachim Rønning & Espen Sandberg (Kon-Tiki); and Rebecca Thomas (Electrick Children). Five of the films—Electrick Children, A Hijacking, In the Shadow, Kon-Tiki and The Sapphires were shown at the festival, where The Sapphires went on to win PSIFF's Audience Award for Best Narrative Feature.

Across the Atlantic in the European version of Variety's "10 Directors to Watch", hosted by the Karlovy Vary Film Festival, Norwegian director Magnus Martens was included for his film Jackpot (2011), which made an appearance at PSIFF as part of their Nordic Lights sidebar. As entertaining as a surfeit of testosterone allows, Jackpot joins a long list of films about bad boys bludgeoning humor out of morally reprehensible behavior. I found it derivative but fully understand why audiences lap it up, especially as it is based on a short story by popular crime novelist Jo Nesbø. The film came to my attention, through multiple recommendations, at last Summer's Fantasia Film Festival, where it was included in a small spotlight on Danish and Norwegian film. For their program note, Kevin LeForest enthused that Jackpot "keeps hitting you over the head with beer bottles, throwing severed body parts in your face and splashing blood all over you, yet all the while, you can't help but grin or downright laugh out loud. Martens's film, which is also genuinely suspenseful at times, benefits greatly from flamboyant cinematography, sharp editing and shrewdly used music." Said music alone primes Jackpot for offbeat Christmas programming.

PSIFF's program note tracks Alissa Simon's Variety review. At The Hollywood Reporter, John Defore expects Jackpot to attract remake-rights attention but cautions, "success with such worn-out tropes would be tough to replicate, especially considering how much entertainment value comes via idiosyncratic performances from its Norwegian cast." Specifically, "a wry, skeptical performance out of Henrik Mestad (as the detective investigating the murders) that's so off-kilter we don't need Fargo allusions—a gag with the recycling plant's plastic-shredder one-ups that film's wood-chipper scene—to tell us how seriously, or not, to take the action." At Slant, Nick Schager dismisses the project as "a wannabe-early-[Guy]-Ritchie effort, full of colorful miscreants, seedy milieus, sex and profanity, and quick-cut flashbacks and narrative focus jumps from one nefarious character to another. ...Feigning both fatalistic cynicism and happily-ever-after hopefulness in equal measure, it's merely a grim retread cast in a two-decade-old mold." Sad to say, I agree. IMDb.
Posted by Michael Guillen at 1/17/2013 02:01:00 PM