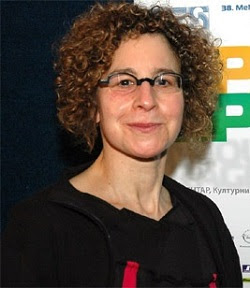 Alissa Simon is a Senior Programmer for the Palm Springs International Film Festival (PSIFF). A film curator for more than 25 years, Simon was named a 1999 Chicagoan of the Year for her innovative work as Associate Director /Programming at the Film Center of the School of the Art Institute. Simon began her career at the Film Department of Walker Art Center and the International Museum of George Eastman House. In addition to her regular work with the festival, she programmed this year's special Nordic Light spotlight. She reviews films for Variety and has served on international film festival juries in Pusan, Belgrade, Amsterdam, Sarajevo, San Francisco, Torino, Ljubljana, Sochi, Cluj, Vancouver and Montreal.

My thanks to Alissa for taking a view minutes from her busy schedule to talk to me about her curated series "Nordic Light."

Michael Guillén: I've long been interested when national sidebars—or, more aptly, in the case of "Nordic Light" a regional sidebar—are programmed into an international film festival. Can you speak a bit to how you pulled together the programming for "Nordic Light"? Is this a consequence of films you've seen at the many festivals you've attended? Or is this a coordinated effort between programmers from different festivals who have highlighted films from—in this case—Denmark, Finland, Iceland, Norway and Sweden?

Alissa Simon: It's a coordination effort between our programming team. We believe that one of the things the festival should do is to spotlight national trends. Sometimes we have a mini-focus as well as a bigger focus, but this year it was readily apparent that films from Nordic countries were really strong. Starting in Berlin, we had A Royal Affair along with many other films that were in the market. Then at Cannes, of course, The Hunt. Then in the fall, especially Danish films like A Hijacking surfaced. So we were talking about what we should focus on and the Nordic countries became our choice.

Guillén: When you observe a trend, national or regional, do you approach those countries, their consulates, their film institutes, to help curate such a program?

Simon: Yeah, it depends on what those countries have. The Nordic countries have strong national film institutes so we have ongoing relationships with them. Some films, of course, have sales agents. Some films, of course, have American distributors already. But usually we're working very closely with national film institutes, saying, "This year we have a Nordic focus and we'd really like you to help us by sending some of the filmmakers after we choose the films. Can you pay their way?" Things like that.

Guillén: I'm not sure you can even answer this question, but can you give a reason why Nordic filmmaking seems particularly strong this year? Is something going on behind the scenes? More government subsidies for filmmaking?

Simon: That I can't really speak to but it could well be that government subsidies from those countries are very strong and really pushing their films at festivals. Denmark, especially, has good film schools, good funding, and lots of native talent. Sometimes in other countries when they're promoting their films, one of those ingredients is missing.

Guillén: Once a sidebar such as "Nordic Light" has been organized so competently and woven into the festival's overall programming, do you find that the sidebar will traffick to other film festivals?

Simon: Well, I noticed last year when we did the Arab sidebar, we were the first country in North America to do that and then all throughout the year I noticed other festivals were doing similar programming.

Guillén: So other festivals were taking your curation as a cue?

Simon: Yes, I think so. Exactly. Or else people are just noticing trends on their own by going to international film festivals. Also, last year was an interesting year politically to focus on Arab film.

Guillén: Well, congratulations on a job well done. I've been enjoying several of the entries in the "Nordic Light" sidebar. I mainly come to PSIFF for the Cine Latino program. I see all my necessary Latin American films and then I fill up all the extra spaces with Nordic, so my head's been pivoting north and south this year.

Guillén: No, I'm a freelance journalist who at a certain juncture began to notice the process by which each year a grouping of films become "annointed", travel, and get all the attention in the press, which is fantastic for those films but it concerns me that little press is given to so many other wonderful films coming out of the Global South.

Simon: How do you explain that?

Guillén: I wish I could explain that. It's certainly what I'm motivated to investigate. I don't know whether "Third World" countries have less money to promote filmic product? I don't know if some countries are better at conferring the "pedigree" required by some films to survive on the festival circuit. Or whether some countries in and of themselves insure pedigree? Whatever the reason, I've committed myself to monitoring cinema from Latin American, Africa and Southeast Asia.

Simon: Do you go to Ouagadougou?

Guillén: Diana's great. She's been very instructive for me. Then I come to PSIFF to see what Hebe Tabachnik offers because she has her own curatorial sense of Latin American film. She focuses on a slightly different group of films and I've found that between the two of them I feel that—at least within North America—I'm getting about the best sampling of Latin American cinema that I'm going to get.

Simon: Where are you from?

Guillén: Surprisingly not, despite their demographics. The San Francisco International will offer a few, but that's about it. For example, I was shocked that Pablo Giorgelli's Las Acacias—which I saw in Palm Springs last year—never had a theatrical screening in San Francisco, neither by festival nor theatrical. That just didn't make any sense to me. Let alone that every attempt at a Latin American film festival in San Francisco has capsized for being either too anemic or too bloated.

Simon: That's so strange. There's so many other festivals there. The Asian American for example.

Guillén: No one has ever been able to explain it to my satisfaction. It's a curatorial mystery. So I'm forced to go elsewhere, to festivals outside of the Bay Area, to become acquainted with recent films from Latin America. Then about all I can do is try to put a bug in, let's say, Rachel Rosen's ear in hopes that she might program some of these films in the Bay Area. This year it's going to be my pleasure as well to put a bug in her ear about some of the Nordic titles, though I imagine she's already well-aware of them.

Simon: I'm sure she already is. She's my Cannes roommate.

Guillén: Well, again, congratulations on "Nordic Lights" and thanks for taking a few minutes to talk to me.