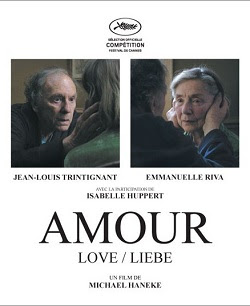 Thanks to the good people at the San Francisco Film Society, the Consulate General of France in SF, the French American Cultural Society and La Semaine de la Critique, I was sent last week to the 65th Cannes International Film Festival as a critic and jury member. Six days into the festival, and I have managed to see a ton of films both good and bad, and I am living the dream of the magpie cinephile.

To start, the best film I have seen so far in the Main Competition is Michael Haneke's Amour. Who knew that the Austrian provocateur behind such films as The Seventh Continent (1989), The Piano Teacher (2001), Cache (2005) and The White Ribbon (2009 Palme d'Or winner) was capable of feeling anything? Amour is the director's most emotional, tender film to date. It marks a shift in his career that resembles late Ingmar Bergman or Carl Theodor Dreyer: restrained, pensive and deeply felt.

Amour is about love, of course, but it is also two hours of a woman dying. Yet Haneke renders this depressing material redemptive and utterly compelling. It's as good a rumination as any about getting old and getting on in life.

The film is also a tribute to seasoned French actors, starring Jean Louis Trintignant and Emmanuelle Riva as Georges and Anne, an elderly married couple whose amour is put to the greatest test of all when Anne suffers a stroke that paralyzes half of her body. Georges, with the help of his daughter Eva (Isabelle Huppert), must care for Anne in the final months of her life. We know from the outset that she is going to die. The film opens with police breaking into the couple's apartment to find Anne splayed on the bed amid a funereal bouquet. Natch, in Haneke tradition, this image cuts to the title card Amour.

Trintignant is my pick for Best Actor at the festival, which ends on the 27th when the Palme d'Or and other awards are announced. As Georges, he is calm, sensible and devoted to his wife, yet we also see the personal toll Anne's condition takes on him in several unsettling dream sequences which punctuate this lovely, elegiac film.

With the exception of one crucial scene, Amour never leaves the apartment, which looks more like the chateau in Bergman's Cries and Whispers than a bourgeois flat. We are confined to these large rooms with Georges and Anne for two hours, but instead of suffocating, it's riveting. Haneke does not sanitize with cliches or sentimentality, and like all his films, Amour is starkly realized, but this time with more heart than head (something new for Mr. Haneke, otherwise known for his cinema of nihilism and dread). I walked out of the theater completely wrecked. I didn't know Haneke could make me feel such feelings. 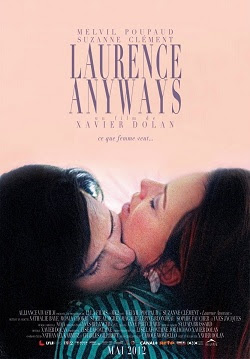 Another excellent film, this one from the Un Certain Regard category, is enfant terrible Xavier Dolan's Laurence Anyways. With this glam epic, Dolan has made his most personal film yet. All he had to do was not cast himself in it.

With its huge, episodic structure spanning 10 years in the life of a couple, Laurence—shot with vibrant color in a 1.33:1 aspect ratio that immediately evokes Dolan's cinephilic nostalgia—smacks of '90s era Pedro Almodovar in telling, through broad brush strokes and intimate moments, the story of a man who realizes he was meant to be a woman. The title character, played with sensitivity and bravado by Melvil Poupaud (a regular cast member of Ruiz and Ozon), becomes a transsexual over the course of the movie but his girlfriend Frederique (the effervescent Suzanne Clément whose performance recalls Kate Winslet's as the manic pixie dream girl in Eternal Sunshine) decides to stick with him. She wrestles with this decision for the rest of her life, as Laurence and Fred are constantly on-and-off, hot and cold.

Given that the film clocks in at nearly three hours, and though it feels surprisingly breezy, Laurence, like Dolan's coiffed pompadour, is going to need a pair of scissors if it's ever going to find an audience across the Atlantic. But it's a big, beautiful film, where we really get the sense that these two flawed but endlessly watchable people are crazy in love with each other. Dolan pumps '80s New Wave tunes, sometimes ad nauseum, into the film and its uber-'90s aesthetic (the shoulder pads, my god those shoulder pads). Sometimes his tendency to smear his style all over his substance does a disservice to the characters and the story, but Laurence is leaps beyond Dolan's previous efforts J'ai tue ma mere (2009) and Les amours imaginaires (2010). Though the 23-year-old director is not quite ready to sack his punk sensibilities and aesthetic attitudes, Laurence is a mature film, a near-masterpiece that's been one of my favorites at the festival. 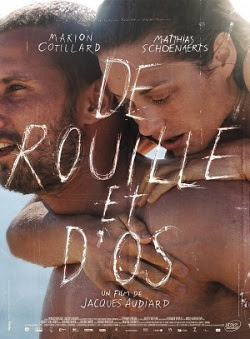 A film I was far less thrilled with but one that is generating a lot of buzz around La Croisette is Jacques Audiard's Rust and Bone, or as it is known in its very chewy French title De rouille et d'os. It is Audiard's follow-up to the 2009 political drama A Prophet. Like that film, Rust and Bone takes its characters and audience on a grand tour of emotional hell. Overwrought melodrama with some seriously good acting make up this otherwise flavorless picture about (you guessed it) two broken souls who come together amid the scraps of their personal tragedies.

As Stephanie, an orca trainer turned paraplegic after a random accident on the job, Marion Cotillard throws herself headlong into her stripped down, untreated performance. The role churns the actress through the wringer and finds her doing some brutal gymnastics of grief and otherwise. Cotillard, along with Matthias Schoenaerts (Bullhead) as Ali, a single dad, amateur boxer and antihero par excellence, could potentially nab the Best Actress prize. In one scene in a hospital—as much as I hate screaming scenes in hospitals—she articulates her emotions with rare fluency. I refuse to dispel the nature of her accident, as forthcoming American trailers no doubt will, but the way she cries out mes jambes, mes jambes is some of the most gut-wrenching, heart-crushing stuff I've witnessed at the festival.

With its contrived incident-driven plot, which is overly determinant of the characters' lives, the film stinks of Alejandro González Iñárritu gone out of control. But there is also, undoubtedly, a reckoning with cinema Americana, like that of Darren Aronofsky, with the film's trembling camera and gritty lens filter. But at the beating bloody heart of the film is the love story of Stephanie and Ali, who meet at a club where Ali is a bouncer. Beneath all the film's ramblings about working class malaise, and a narrative momentum that's frozen in melo-molasses, there is something so moving about the film that I cannot shake. Plus, it uses Katy Perry's pop ballad "Firework" in such an unexpectedly tender way, I couldn't help but feel my heart strings pulse and pull a little bit. Rust and Bone will be nominated for Academy Awards, mark my words, and it's really going to work with American audiences.

Thanks for the reviews. I'm really can't wait to see Amour and Laurence Anyways.