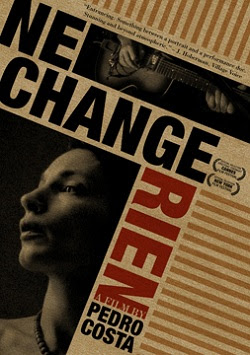 Pedro Costa's Ne Change Rien (2009) is a glimpse into the abyss that is process: long hours spent pouring endless energy and concentration into minute details that the majority won't even notice, perfecting an expression, giving it a power to punch the viewer / listener in the stomach, wielding only a silence, a gesture, a cut, a word, an unexpected note.

Jeanne Balibar is presented as the creative driving force behind the music—it's her name on the album just as the films are "by" Costa—but both receive aid and inspiration from their peripheral collaborators. Balibar's music is co-written. She is guided by the musicians who play with her, patiently persisting, playing and replaying until she can find the tempo and get her phrasing right. Costa's films, likewise, are created with the input of those who appear in them. They bring to life onscreen versions of their own life stories, leading Costa and his films to their eventual expression. Both draw inspiration from material that's come before, which they use as a foundation to build on, whether it be a "Superfly" sample or a Jacques Tourneur plot. Even Costa's shooting methods mirror the musical process. Just because a scene's been committed to tape doesn't mean he won't revisit the material and shoot it again weeks later, allowing the atmosphere and "vibe" of the room and/or the day to imbue the performance.

Costa shed the baggage of celluloid after making Ossos (1997), feeling it constrained and imposed on his process too much. One can imagine him reacting similarly to Balibar as she rehearses La Perichole. She isn't in control of her process. She's stopped every other syllable to make adjustments. Her frustration visibly builds as she's forced to bend to another's will and the demands of the medium, much as Costa himself once had to bend to the needs of film (lights, crew, etc.). 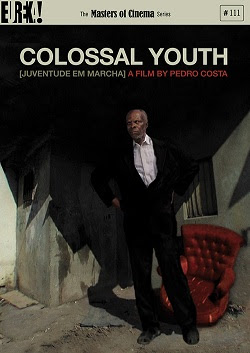 Costa's latest work—this and the 2010 short O Nosso Homem, another variation on the footage used in Tarrafal (2007) and The Rabbit Hunters (2007) and included on the Masters of Cinema's must-have Colossal Youth (2006) set—looks towards the past, without a hint of the future. Compare that to a filmmaker with whom he is often compared: Lisandro Alonso, whose Untitled (Letter to Serra, 2011) similarly deals with the filmmaker's past work but dangles a few tantalizing possibilities about what is to come. Will there be another shift in his process? Where does Costa go from here? Where is there to go after In Vanda's Room (2000) and Colossal Youth? Perhaps the answer, or maybe just a hint, can be found in O Nosso Homem, which proves the malleability of images. Just because something's been done or seen before doesn't mean it's potential has been exhausted.

It comes as no surprise that The Cinema Guild's DVD release of Ne Change Rien is top shelf. Image and sound are stellar and the extras are plentiful with a few deleted scenes and a sampling of Balibar's "Tronomettes" (musical sketches featuring accompaniment by a metronome). Cinema Guild continues their habit of including short films when possible (and bless them for it), as their Manoel de Oliveira and Agnes Varda discs, and the inclusion of an early Bela Tarr short on their upcoming Turin Horse release attest. The real gem is Costa's short film The End of a Love Affair, a modest piece whose pleasures are derived from the simple act of viewing, much like how the subject of Costa's short watches the street from the window. The curtains billow in from the edge of the frame. Light dances on the bed sheet and across the chest of the man. The title song joins in after a spell; but, we learn nothing about the man. In the parlance of Billy Brown, we "span time" with him. And in many ways, that's all we should ask of the moving image.
Posted by Michael Guillen at 5/22/2012 10:43:00 AM