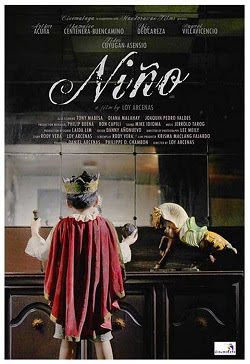 The 2010 edition of the San Francisco International Asian American Film Festival (SFIAAFF) introduced me to Filipino cinema. I took a festival studies approach to SFIAAFF's Filipino sidebar (Filipino Cinema and "Imagined Communities") and compiled a critical overview of Lino Brocka's Tinimbang Ka Ngunit Kulang (You Have Been Weighed and Found Wanting, 1974) as a sampling of SFIAAFF's mini-retrospective honoring Brocka. Then I solicited and retained the cooperation of the three Philippine film critics championed by Alexis Tioseco in his piece "Wishful Thinking for Philippine Cinema"—Francis "Oggs" Cruz, Eduardo "Dodo" Dayao, and Richard "Chard" Bolisay—all three who consented to interviews. Oggs and Chard further granted permission for me to republish their reviews of Yanggaw (Affliction, 2008). I enjoyed working with and learning from all three of these young gentlemen so much, that I continue to solicit their advice and counsel concerning all films Filipino to this day.

Thus, I was especially pleased when Joel Shepard advised of an upcoming program of "New Filipino Cinema" programmed for Yerba Buena Center for the Arts (YBCA), June 7-10 and June 17, 2012. Featuring 29 films, 24 of them U.S. premieres, "New Filipino Cinema" is the most comprehensive survey of contemporary Filipino cinema presented in the United States. Shepard explains: "New Filipino Cinema is a big fat snapshot of the diverse range of filmmaking going on right now—narrative features, documentaries, and experimental work. The clichéd images of the Philippines that most foreigners are familiar with are of poverty, prostitution, and crime. Those social ills are represented in this series, but they absolutely do not define this complex and extraordinary country. It's important to understand this. I was also careful to represent filmmaking taking place outside of Manila, and to include many women directors." 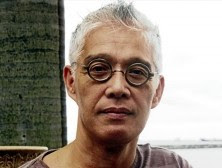 "New Filipino Cinema" kicks off on Thursday, June 7, 2012 with an opening reception to welcome director Loy Arcenas, who will be attending his opening night film Niño (2011). My Philippine colleagues Oggs Cruz and Dodo Dayao encouraged me to watch Niño when it screened earlier this year at the 2012 Palm Springs International Film Festival, and I found it to be an enjoyable and affecting melodrama about a family as worn about the edges as the delapidated house in which they live out their circumscribed lives. The patriarch has fallen into a coma and his sister Celia, a former opera star, tries to miraculously revive him by dressing her grandson up as Santo Niño de Cebú, the Philippine variant of Santo Niño de Atocha, seen here wandering whimsically far from his holy chair, running throughout the old house, and among the complicated—if not quite modern—lives of its inhabitants. The film's comic flourishes are its highlights.

Shepard deepens the perspective: "The image of the child Christ, the Santo Niño, holds special significance to the Filipino faithful. It is said to cause miracles, the idol a perfect representation of the country's strange conflation of religion and superstition. It is why a young boy has been dressed up as the Santo Niño in this clever dissection of a fading aristocratic family. With the patriarch fallen ill, the debts piling up, the house crumbling, and the family falling apart, all that's left is to pray for a miracle. With studied grace, Niño explores a social class rarely depicted in Filipino films, revealing a deeply human core to aristocracy." 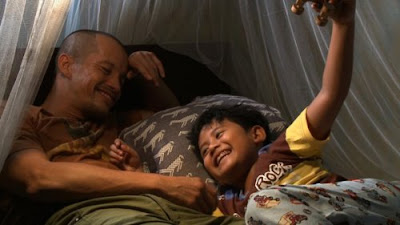 At Lessons From the School of Inattention, Oggs Cruz details that exploration: "There is a reason why people are fascinated with ruins, despite the evident disrepair and decay. Ruins are permanent reminders of a distant glorious past. In Loy Arcenas' Niño, the Lopez-Aranda clan is portrayed with the same fascination, as if the family were ruins on display: the bits of opera that Celia sings to bedridden Gaspar with her aging soprano are the broken columns, the stories told by Gaspar of his blossoming political position are the damaged statues, and the rustic house, its remaining furniture and ornaments and the anecdotes of the loyal household help of the house's former prominence are the collapsed edifices, the wilted gardens, the burnt arcs, all of which are faint indications of the family’s expired extravagance." For a first-time filmmaker, Cruz finds Niño a "feat to behold", and stresses Arcenas' "disciplined craftsmanship." 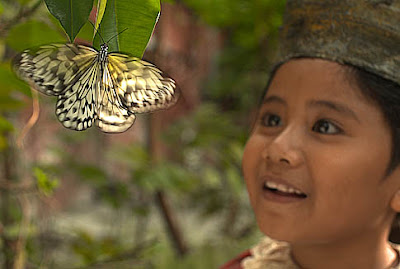 Blurbs On Contemporary Filipino Films adds: "The effort to create an envelope-pushing film concocted over jaunty pieces of melodrama, gothic humor, opera music and camp with a Hallmark strain that’s too close for comfort, warrants some recognition. But it is through Rody Vera's excellent screenplay that we see, hear, smell, taste, and feel the angst the characters lived through, with their varied forms of displacement and agony rattling in the most smoldering of friction."

At Pelikula Tumblr, Jansen Musico has a brief conversation with Arcenas, wherein he explains: "Rody and I love irony and we much agreed how much irony fills up our daily lives. We wanted to explore this in the film, within the context of a comedy of manners. But Filipino life is a hijinks of comedy and sorrow and so we decided that Niño should be a study of the present Filipino psyche walking the fine line between tragedy and comedy."

Preceding the film, Alleluia Panis of Kularts will perform "Ritwal" with vocalist Kristine Sinajon.
Posted by Michael Guillen at 5/23/2012 06:34:00 AM

My friends in the Philippines are all hyping up ZOMBADINGS so I'm really looking forward to that Queer take on the Zombie genre!

Glad to hear you're as enthused about the series as I am, Adam. Joel has accomplished something quite remarkable here. Let's help him get the word out.