YBCA: NEW FILIPINO CINEMA—KANO: AN AMERICAN AND HIS HAREM 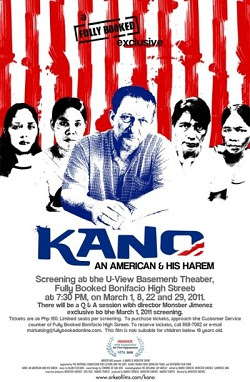 As Monster Jimenez explains on the website for her documentary Kano: An American and His Harem, "kano" (pronounced kä•nô') is Tagalog slang for Amerikano; i.e., American. But, Jimenez qualifies that Filipinos usually refer to any caucasian, regardless of ethnicity, as kano. The kano in question is Victor Pearson, a decorated American Marine who arrived in the Philippines in 1969 after surviving a bomb blast while fighting in Vietnam, thereby earning himself a hefty disability pension of $3,500 a month for his post-traumatic stress disorder. Considering that at the time the average monthly income for a Filipino was a mere $250, Pearson arrived a wealthy man by comparison, and was able to wield considerable influence and power. He set his sights on "living the dream"; one that "every heterosexual male dreams about."

Pearson swiftly discovered how easy it was for him to secure a Filipino wife and a plot of land in a poor, remote village in the Philippine province of Negros Occidental. He built a compound and filled it with a harem of wives and mistresses, many of them underage women as young as 11, all dependent upon his financial handouts. "It was like Christmas and birthday and holiday all rolled into one", he recalls proudly. With his disability fund, Pearson lived like a king in his compound for more than two decades, where the main activity was sex. In exchange for "love", Pearson offered his women allowances, jewelry, and shopping money.

But in 2001, Pearson was charged with 87 counts of rape against eight women, most of them reported to be aged 13 to 16 at the time, convicted on two counts the following year, and sentenced to 80 years in jail. Irregardless, the Sideways Films one-sheet for the film wryly asserts, "We think you'll like him." And there's no denying that Pearson has plenty of charisma—and rationalizations—to spare.

At Lessons From the School of Inattention, Oggs Cruz characterizes: "Pearson looks like a thoroughly unkempt Harvey Keitel and talks like a reflective but drunken Edward G. Robinson. He is an inevitable screen personality. His back story, with the possible barrage of psychological torture from a hinted torturous childhood and Vietnam War experiences, could have been a Kubrick thriller. His present story, as embattled villain in a legal battle against all odds, could have been a clever Lumet court drama."

At Piling Piling Pelikula, Dodo Dayao offers his take: "If it doesn't exactly plumb the same depths of malevolence as, say, Charles Manson, what he does exude is a similarly dangerous ambivalence: charismatic and diabolical in equal measure. And it leaks into the movie, irradiating it almost. The part where he sings 'Love Potion #9' smacks of both the quaint and the sinister, and not merely out of how creepy the subtext of the song gets, no. One second he's your boisterous uncle with one too many drinks in him hogging the family videoke, the next he's Dean Stockwell in Blue Velvet. He is, in many ways, the quintessential pervert. He is also the perfect documentary subject."

At Spot, Ria Limjap describes Pearson as a fascinating character who Jimenez allows "to unfold with a gentle detachment. She catches Pearson's twisted charisma and his central tragedy, evoking revulsion and compassion in equal measure. The nicotine-stained and puffy-eyed sexual predator should be nothing but repulsive, right? Right. But sometimes he's just a lonely old man with screaming lambs of his own." 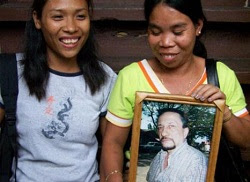 Although Pearson is now serving two life sentences in Manila, many of his women stand by him, surprisingly even those who testified against him in court. Pearson and his harem form an extended family bound together by codependency and power issues. Although still behind bars, he has since married five of the women who testified against him in court, keeping them in apartments in the neighborhood. Several of the women sport tattoos bearing his name. With considerable prurience, Jimenez explores the blurred line between generosity and exploitation. Whereas on one hand women sold their own children to Pearson, on the other hand he financed their education and provided opportunity they could otherwise never hope to have.

Unrepentant when confronted with his abuse of girls as young as 14, Pearson claims that the lifestyle and education he provided these women outweighs the charges leveled at him. This becomes the provocative litmus test of Kano—the filmmakers don't judge, both sides are presented as fairly as possible, and it's up to each audience member to determine "right" from "wrong" in this tangled and conflicted scenario. As Basil Tsiokos states it for Indiewire: "Giving equal time to both Pearson and the women's stories, the film gradually reveals a system of sexual subservience predicated on economic exploitation—a system that most women (or their families) may have entered resignedly, but, sadly, fully aware." But Oggs Cruz warns against too simplistic a reduction: "To simply regard their intertwined relationships as primarily economic is to disregard the complexity of human nature. Jimenez explores not only the cycle of financial dependency but also the continuously evolving emotions, no matter how misplaced, mutated and immoral they seem to be."

Dodo Dayao furthers: "At no point does the film slavishly demonize Pearson. At no point does it need to either. That's the bone to pick for many. Only its gut-punch, both as film and as argument, really gets its brunt from resisting the urge to editorialize, leveling everything past the point of being about one man's guilt to being more about an entire nation's cultural psyche. How deep our resident subservience to the white man runs. How every moral choice tends to boil down to money changing hands. How money is our enabler, our prosthetic, our elixir, our atonement. And more than that, how the beloved infidel may well be our prevailing icon of machismo. Pearson doesn't faze us too much, perhaps, because he is, in many ways, nothing new. He is every domestic action star who ever played a real-life philandering family man slash cop hero and spread the gospel of the other woman as a badge of manliness. And that he's a war hero, too, makes the embodiment even more perverse."

Funded by the National Commission for Culture and the Arts (Philippines), the Asian Network of Documentary (South Korea) and the Goteborg Film Fund (Sweden), Kano is the first documentary project of Arkeofilms, the independent film production company where Jimenez is managing director. It was selected for the First Appearance Competition of the 23rd edition of the International Documentary Film Festival Amsterdam (IDFA), November 17–28, 2010, where it won. As reported by Isabel L. Templo to the Philippine Daily Inquirer, "The five-man international jury called it a film of 'disturbing power [that] explores a stunning mix of child abuse, post-traumatic stress syndrome, polygamy, co-dependence, sex addiction, criminality, and the lone voice of one woman whose testimony sends a troubled Amerikano living in the Philippines to jail.' " It likewise won Best Documentary at both the 2010 edition of Cinemalaya and the 2011 edition of the Gawad Urian Awards.

Though Victor Pearson is, as Dodo Dayao stated above, "the perfect documentary subject" and his story an undeniably compelling one, the documentary itself is more informative than artful and marred by indecisive camera work that struggles to position itself within the scenes, aggravated by quick zooms in and out that feel unsettling and amateurish.