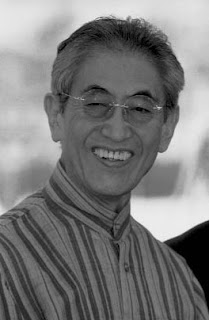 I've been living with Nagisa Oshima since late May and now find myself a bit melancholic that James Quandt's retrospective is leaving North American shores for Europe. I can't say that I caught every film in the series—even if I might have desired to; I was out of the Bay Area for a large middle section of its Pacific Film Archive stint—but, I caught enough to familiarize myself with Oshima's work and anticipate filling in the blanks come future opportunities. I likewise hope in future weeks to respond in writing to what I was fortunate enough to see. 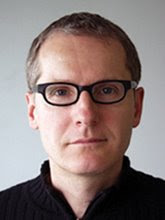 Without question, the foreground experience was being invited by Susan Oxtoby to interview James Quandt during his visit to the Bay Area. Much like Girish Shambu owes his "cinephilic coming of age" to Quandt, my conversation with him bumped the word "autodidact" to the top of my favorite words list and has me seriously questioning the current festival practice of reviewing "films" by DVD screener (without responsible and requisite caveat).

At Critical Culture, Pacze Moj offered a dissenting voice against the Oshima retrospective, primarily objecting to a comment made on the PFA website that few of Oshima's films were available on DVD or video. "Few films on DVD or video?" he writes, "Really? How odd: we Internet-generation peoples must be living in the future! ...because all but one of the feature-films playing in the retrospective are available online, through bittorrent or emule or both." Pacze then provides links to where the films in the retrospective can be downloaded onto computer. He likewise defends the new cinephilia, which doesn't demand in-cinema experience. We've agreed to disagree on this point of contention, though I would be interested to know how many writers actually use bittorrent or emule to download movies for review? I had always objected to the investment of time but Pacze argues: "[P]atience might depend on how you download. Emule can be slow, but a well-seeded torrent is quicker than going to the cinema, quicker than Netflix, quicker than driving to the video store." Pacze Moj's entry is particularly noteworthy for his links to Berkeley's CineFiles project, which I incorporate here for ready reference. 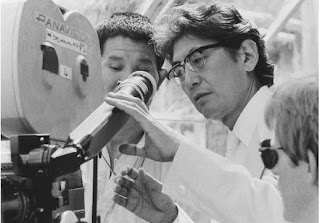 Tom Luddy's eight-page booklet from a 1972 Oshima retrospective. My eyebrow raised when I noted that films were only 75¢ back then!

David Owens' four-page booklet to a 1982 retrospective also called "In the Realm of Oshima".

Ian Buruma and Audie Bock's 23-page booklet from an Oshima retrospective held at the Hong Kong Film Festival.
Posted by Michael Guillen at 7/19/2009 11:50:00 AM

Pacze Moj neglects to mention that while most of the films might be online, it doesn't mean that all of them have English subtitles (Pleasures of the Flesh doesn't) or that their visual quality is particularly good (the file of Dear Summer Sister that I've seen was ripped from VHS).
Having seen several of these films on bootleg DVD first and then at the PFA, I can say that the PFA screenings were the better experience, especially because so much of Oshima's work is in cinemascope and benefits best from the largest possible screen.

Thanks for the feedback, IA.

Thanks, Maya and IA.

I always think this is an interesting topic to discuss!

...as for those Etsuraku subtitles, have you looked at opensubtitles recently?

As it turns out, Pleasures of the Flesh is available on Region 2 DVD, and thus easily available for anyone who has an all-region DVD player and an account at amazon.uk. But not everyone who might consider going to the PFA would necessarily have these, and the number of people with the technical savvy to use bittorrent or emule and then graft downloaded subtitles onto a video file is even smaller--much smaller actually. Many people, even those "Internet-generation peoples" might simply say to hell that and just go to the theater instead, especially since the screened print of PotF was new and beautiful, thanks to Janus films, and thus of better quality than any DVD. (And well-seeded torrents of Oshima that take less time than going to the cinema are not as prevalent as one would hope.)

When the PFA says that few of Oshima's films are available on DVD or Video it obviously means officially released ones--the archive would hardly advocate illegal downloading or alert potential patrons to it. Nor does the PFA's clientele predominantly consist of tech-familiar whiz-kids skilled at port-forwarding and srt application--I imagine that the majority of its patrons would either be unfamiliar with most of the demands of downloading movies or unwilling to take the time to learn how to do so.

By the time the Oshima retrospective rolled around I already had half a dozen of his films on bootleg, custom-made DVDs. I saw those films on the big-screen anyway. On DVD they now seem quite reduced in impact. I'm grateful for bittorrent, but what it provides can only stand in for the full theater experience.

Once again, thanks for taking the time to articulate your perspective. I agree with Pacze: this is definitely an interesting topic to discuss and has been discussed long before he and I began volleying opinions. The whole effect of digitisation on distribution flows is just one of the avenues being explored and developed in film festival studies. How film festivals--and in our particular instance, the traveling retrospectives of cinematheques--reposition themselves with regard to these developments is yet to be determined but wholly fascinating to observe.

In his paper "Coming To A Server Near You. The Film Festival in the Age of Digital Reproduction" recently-published in the Film Festival Yearbook 1: The Festival Circuit published by the University of St. Andrews and edited by Dina Iordanova & Ragan Rhyne, Nick Roddick--also known as "Mr. Busy" at Sight and Sound--has observed: "[T]he role played by festivals in showcasing non-studio films and hopefully shepherding them into distribution is under threat from the digital technology which will soon come to dominate the film distribution process." (2009:159)

One might make an aligned argument that the role traveling retrospectives have played in generating interest in a filmmaker such as Nagisa Oshima is likewise—per Pazce Moj's contentions—irrevocably weakened by digital access.

Roddick continues: "As soon as a download box is developed that can link the web direct to your TV (or wall-mounted flat screen) and speakers; as soon as it becomes impossible to download a feature film in three minutes without excessive compression and at a reasonable price; and as soon as doing all this becomes no more difficult than operating a normal remote, then most of our entertainment needs, audio or visual, are likely to be met online. Festivals are kidding themselves if they think they will remain the key to this process." (2009:166)

His statement forces me to realize that I consider the social a definite and intense part of my entertainment needs.

I think the "technical savvy" required to use torrents (and subtitles) is very, very much overstated...

but, I agree about the quality (sometimes -- especially with old art films) and the social aspects of festivals, tours, theaters.

This is slightly off-topic, but fits:

^^
streaming high-quality films into theaters by using torrents on a high-speed internet connection.

This is indeed a fascinating topic as well, and though I'm a bit late to the party, I would like to add a few cents to the discussion.

I agree with IA's point about the advantage of watching films on the largest possible screen, and Michael's about the the sociability of watching in cinemas, and though these can indeed be maintained while still circumventing traditional distribution channels as in the Far North Living Labs experiment you point out, pacze moj, there's another (for me) crucial aspect of these retrospectives that would still be lost without the involvement of traditional distribution infrastructures: the material quality of the 35mm print itself.

There's something, difficult to put into words, about seeing images made to be seen on celluloid (and I'd say anything by Oshima counts; perhaps not more recent directors). Even an absolutely terrific digital image has a different quality. Some talk of a veil, perceivable even in digital restorations transferred back to film for distribution. Others speak of the flicker. I don't know how to describe it, but I do know that I can tell when I'm looking at a digital projection and it's not the same kind of experience for me.

35mm is still a more viable archival format (by most standards) than any digital system as well. The fact is, these films exist in celluloid form, and without Janus/Criterion (or the like) striking a newly restored print, many films remain completely unavailable. Double Suicide: Japanese Summer is a perfect example; a new print was created for this retrospective, and while it may be only a matter of time before someone leaks a video copy to the pirate underground, if potential cinemagoers pass up a rare opportunity to support this endeavor as a member of the paying public, there's less incentive for anyone to restore a rarity in the future.

James Quandt mentioned that of the recent retrospectives of Japanese directors he's put together, this Oshima tour has been the least well-attended overall. Anecdotal evidence supports this; none of the screenings I made it to drew very close to capacity crowds. Even the house for the most well-known film in the series, In the Realm of the Senses had plenty of empty seats in it. By contrast, several of the Mikio Naruse screenings a few years back were sell-outs.

The program guide introduction to the Naruse series made no mention of the fact that few (far fewer than Oshima) Naruse films had ever appeared on VHS or DVD (at least not in this country). Perhaps that's because feature film piracy of niche titles was so much less prevalent 3-4 years ago than today. Would a Naruse retrospective in 2009 draw smaller crowds than the one in 2006? Quite possibly. If this is indeed a traceable trend, might it affect the likelihood of new prints of Kinoshita, Shimizu, Shindo, Shinoda, Gosho, and Kinugasa films being struck for future retrospectives (and DVDs)? It seems sadly unavoidable.

What fantastic insights, Brian, thank you so much.

Thank you for providing a post with so much food for thought, Michael!

I notice upon rereading that the opening sentences of my final paragraph do not seem to flow together. Just add a "This despite the fact that" to the opening of the first sentence in that 'graph and I think it makes more sense.