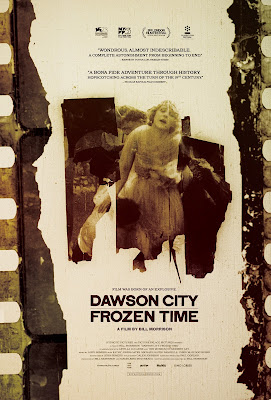 There are some who might argue that Bill Morrison’s Dawson City: Frozen Time (2016) was robbed of its due Oscar nomination for Best Documentary Feature of the year, and I would be inclined to agree. Rarely does one view a documentary of such arousing idiosyncracy and unexpected scope.

Kino Lorber, Dawson City’s distributor, provides the context: “This meditation on cinema’s past from Decasia director Bill Morrison pieces together the bizarre true history of a long-lost collection of 533 nitrate film prints from the early 1900s. Located just south of the Arctic Circle, Dawson City was settled in 1896 and became the center of the Canadian Gold Rush that brought 100,000 prospectors to the area. It was also the final stop for a distribution chain that sent prints and newsreels to the Yukon. The films were seldom, if ever, returned. The now-famous Dawson City Collection was uncovered in 1978 when a bulldozer working its way through a parking lot dug up a horde of film cans. Morrison draws on these permafrost-protected, rare silent films and newsreels, pairing them with archival footage, interviews, historical photographs, and an enigmatic score by Sigur Rós collaborator and composer Alex Somers. Dawson City: Frozen Time depicts the unique history of this Canadian Gold Rush town by chronicling the life cycle of a singular film collection through its exile, burial, rediscovery, and salvation.”

As further synopsized in the Pacific Film Archive (PFA) program capsule: “Much of our cinema history has been lost, and so the discovery of more than five hundred reels of silent nitrate film, buried for decades under permafrost in a former Gold Rush town, could only be greeted with ‘Eureka!’ Morrison’s film is a beautiful meditation on this rare, often damaged, footage as well as a history of the corner of the Canadian Yukon where it was found. ‘In addition to being filled with as many twists and turns as a first-rate suspense thriller, Dawson City is packed with near-metaphysical intimations, both awe-inspiring and humbling’ (Glenn Kenny, New York Times).”

Dawson City is part of PFA’s probing program “Reverse Angle”, a series of films that question the function and capabilities of cinema in our daily lives and in society by interrogating the medium itself (through narratives, documentaries and experimental film) and, thereby, “finding answers that are passionate, precise, and unexpected.” By looking at lost films, Dawson City adds to our knowledge of film history and is, thus, perfectly situated in PFA’s “Reverse Angle” program. The Archive added value to its recent screening by inviting Bill Morrison to introduce the film and interact with his audience.

As relayed by Kathy Geritz in her introduction, Bill Morrison often draws on archival film material, and has almost single-handedly introduced audiences to the beauty of decaying, damaged film in films as diverse as Decasia (2002), The Miners’ Hymns (2010), and The Great Flood (2012), as well as many shorter works. One reviewer noted: “Beautiful, terrible decay somehow meshes with an innate poignancy of old film images to create an awareness of transience.”

Morrison works in a number of ways, often with composers and musicians, including Richard Einhorn, Michael Gordon, Dave Douglas, John Adams, Philip Glass and, close to home, the Kronos Quartet. A number of his filmic presentations have been accompanied by live music, some inside cinemas, some inside music theaters, sometimes in music halls and other spaces.

Morrison has also created film installations and—unusual among filmmakers who fall within the experimental film tradition—he largely makes work as commissions. Some of his films have been called “trance films” and, in fact, his company is called Hypnotic Pictures. He’s also been called an alchemist.

Some of his works examine historical moments, such as WWI or the Mississippi River delta floods of the 1920s, while some of his films overtly explore film history, such as Dawson City: Frozen Time and his earlier The Film of Her (1997), which looked at paper prints. Of course, Decasia looked at nitrate damage and his other works have looked at archival collections or specific films. In his case, the historical examination and research is done through the making of the film, which is a wonderful way to conduct such explorations. Dawson City might be deemed the most “documentary” of his films. It works with damaged films in an unusual way to provide its history.

Low-key and wry in his introduction, Morrison expressed feeling well-embraced by the East Bay and found it unusual to be involved in a “Spring” series in January. Having not been to the PFA in several years, he commented that it “looked different” than two venues back. He promised to have “more jokes” during the Q&A.

Michael Guillén: My question follows on Kathy Geritz’s earlier description of Dawson City as a “trance film”, which registered specifically for me in the montages where you aligned similar actions; for example, in the sequence where the women were turning around in place, shifting from an ethnographic image of an African woman to that of a seemingly upper class white woman and onward. I found that aligned discrepancy hypnotic and it struck me as an “aha” moment or, more appropriately, a “Eureka!” moment. Can you relate any particular “aha” moments that occurred for you during the compilation of this film as you were sifting through all this discovered material?

Bill Morrison: First of all, the tropes of silent film are often well-defined, so that a woman was often asked to spin. A lot of the narratives were advanced by listening at the door so that a sound card could say what they were hearing, or as a letter was being read. As I sifted through almost 400 titles of film, and as these moments recur over and over again, as sort of a joke to myself I was keeping a list (or “bins”) where these things occur and those became sequences; really just for fun or as a way to organize the imagery, but then—as they advanced—as a narrative device. The women listening at the door were, in my mind, the films rummaging through the library without anything left to do and left to their own devices.

There’s also the sequence of brutality or harassment of women, which made this a very timely film in the making of these Hollywood moguls and the studios that some of them found and lost. I had any number of bins: baseball—elephants caught my fancy—and that was just a way of trying to get through all this footage and finding light stuff, which found its way into the narrative.