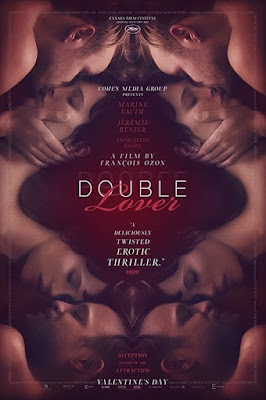 Don't you know that I can tell
Whenever I look at you
That you think that I'm untrue
'Cause I say that I love two?
But I really really do
'Cause you're a split personality (personality)
And in reality (reality)
Both of them are you baby (they both are you)
Well, I've got two lovers and I ain't ashamed
Two lovers, and I love them both the same.—Mary Wells, “Two Lovers”

In a perverse stroke of humor, François Ozon’s Double Lover (L'amant double, 2017) opened theatrically on Valentines Day and—not having read any reviews—I presumed it was going to be a frothy if sexy French love story. Little did I know it would be a French extremist psychosexual thriller comparable to the horror flicks with which I frequently frighten myself. But as psychosexual thrillers go, Ozon’s Double Lover makes 40 Shades of Grey look like white-on-white mother’s milk. And with an increasingly provocative “me too” climate of recriminatory perspectives, Double Lover seems even more subversive and transgressive than it admittedly already is.

From the onset the viewer is incriminated—seduced?—by Chloé’s (Marine Vacth’s) direct address while she is having her long tresses mercilessly shortened. Instantly, we know she is in a state of transformation and we are to bear witness. Her “cat ate the canary” half-smile seems to ask, “Don’t you want to bear witness? Aren’t you curious to know how I’m going to change?” Is she, for starters, a young woman fashioning herself into a young man? Arguably, the film insists on being mesmeric, manipulating the viewer through the self-hypnosis of expectation. 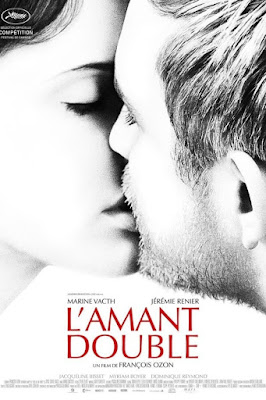 Chloé suffers from a continuous and mysterious stomach ailment and sets an appointment to visit analyst Paul Meyer (Jérémie Renier) who might “cure” her, succumbing to the feigned conceit that the understandings lured from psychoanalysis might constitute a cure. Philippe Rombi’s score—evoking Bernard Herrmann’s obsessive leitmotifs for Hitchcock’s Vertigo and Marnie—accompany Chloé’s ascent up a spiraling staircase that feels, at the same time, as if we are whorling into her psyche. Within her first analytic session, Chloé aligns the ache in her stomach with the feeling she gets when judged by her mother. Marnie, especially, lends precedent as it’s not long before analyst and analysand fall in love and into bed, psychoanalysis melding with the “applied techniques” of sex therapy to melt the frigidity of our pretty doe-eyed Chloé who, true to common practice, lies to seduce. Chloé’s frigidity surfaces as her main symptom and points to deeper, repressed motivations, enough so to quote William Blake’s “Proverbs of Hell”: “He who desires but acts not, breeds pestilence.”

Cinematographer Manuel Dacosse has a field day texturing the film’s mise en scène with doublings, twinnings, mirrorings, replications, reflections, inversions, refractions; the deflections of shiny surfaces that steer the film’s tense narrative traction and fuel spectatorial voyeurism. Often the camera captures bodies in action duplicated in mirrors and—as much as this reveals by way of angles of intention—it likewise tantalizes for not revealing enough; for supplying a surfeit of visual surface that, though ample and naked, remains impenetrable and inscrutable. 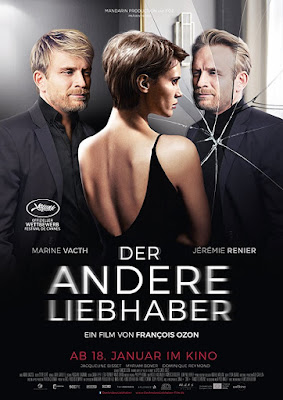 To further this barrage of doubled images, Ozon peppers the plot of his twisted case study with two cats—in some circles, a psychological shorthand for split personalities—and introduces Danton, a tortoiseshell cat who is a rarity for being male. We learn that most tortoiseshells are female with two colors, but 1% are male with three colors (Danton=Three Muskateers?). Male tortoiseshell cats are a “genetic eccentricity” that start out as twins in utero but end up as one when the dominant twin “absorbs” the weaker. This “trisomy of the chromosome” is interpreted as parasitic or cannibalistic, and might be extended to the premise of what happens to a perception of reality when it encounters a more dominant fantasy of reality?

Of course, Ozon is not content to leave scientific fact alone. He introduces a gift in a jewel box that is, at first, a brooch in the shape of a cat, then later the pumping heart of a cat. On whose lapel this jeweled brooch ends up reveals all!

One never quite knows if the fantasies projected on the screen are indicative of Chloe’s psyche—fractured fantasies in service to her characterization—or more decidely auteurial, characterizing the filmmaker’s narrative intent. One thing is for sure: there’s never a dull moment as Ozon startles the viewer again and again—right to the final image—inducing significant, if sensorial, headscratching.