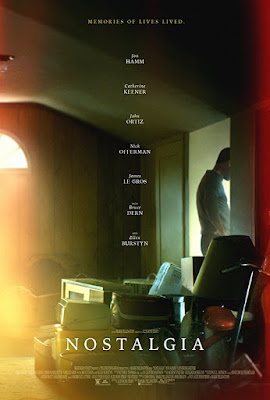 Nostalgia (2018), directed and co-written by Mark Pellington (with Alex Ross Perry), and starring Jon Hamm, Ellen Burstyn, Catherine Keener, Bruce Dern and John Ortiz boasted its world premiere at the 2018 Palm Springs International Film Festival (PSIFF), accompanied by Pellington and Hamm, who introduced the film to an enthused audience and fielded questions from a sobered one.

As synopsized by PSIFF in their program capsule: “Emotional performances from a stellar cast led by Jon Hamm, Ellen Burstyn and Catherine Keener come together to stirring effect in co-writer/director Mark Pellington’s bittersweet reflection on the complicated nature of family, loss and the things we leave behind. Intricately structured as a chain of individual narratives linked by characters and themes, Nostalgia’s throughline is a considerate insurance man who patiently witnesses his clients’ stories as he assesses the physical artifacts of their lives. What is the value of a piece of jewelry if it once belonged to Grandma, a baseball if it was signed by one of the greats? How is the value of an object changed by the hands that once held it? Long takes and thoughtful framing highlight the nuanced script, which explores the changing attitudes of generations through both monologue and conversation. Woven throughout is the film’s unifying principle, urging us to live—and love—in the here and now.”

Pellington emphasized that—at a time when making movies is becoming harder and harder, especially meaningful movies—Nostalgia could only have come into being as the labor of love it really truly is. His time on the PSIFF stage seemed intent on acknowledging his collaborators on the film, several in the audience who stood in turns to take their bows. Shot in 18 days for a minimum amount of money (by today’s standards), he believes the film looks like a lot more money was spent on it than their allotted budget, attributable to artistry that comes from the heart, including a dedicated, spiritual and psychological commitment from his ensemble of actors. Pellington also shouted out to Alex Ross Perry who he provided notes, ideas and sketches in hopes that Perry could help him shape them into the script for a film, which Perry accomplished. Pellington has no doubts that it was Perry’s script that drew the attention of such great actors as Jon Hamm who—once he accepted the role—provided key leadership in securing the remaining cast.

Jon Hamm, dressed in a khaki-colored suit, joked that he loves Palm Springs so much that he dressed up as a sand trap. He praised Nostalgia as being an emotional and meaningful story.

After the movie when they returned to the stage, Mark Pellington joked that Jon Hamm got all the laughs in the film. “There were three of them,” Hamm quipped quickly, aiming to lighten the auditorium’s somber air. Undeniably meaningful, Nostalgia was nonetheless a rough and unrelenting film to watch. Whereas most audiences predictably attend films to be taken out of their quotidian reality, Nostalgia can make no claim to do so. Its purpose is oppositional to such distraction, mining a deeper everlasting truth that informs everyday reality. Its belief in cinema is as a mirror to better understand, unflinchingly, the human condition. Pellington was humbled and happy to have shared the world premiere with his PSIFF audience and glad, at the same time, to finally “let go” and let the film be whatever it is going to be. He remained convinced that anyone from 8-80 could find themselves somewhere in the spectrum of the movie; child, parent.

When he approached Alex Ross Perry with instructions to shape meaning from his many ideas concerning loss, grief and memorabilia, hoping the film could explore same, Nostalgia’s form took on a weird momentum. It is not a plot-driven movie. Although it is being billed as a “mosaic”, Pellington more accurately described it as a record album placed on a turntable with one song leading to the next and the next. When you’ve finished listening to the album, you can put it back in its sleeve, or not. Or you take it out again and experience it all over. This musicality, this structure, was confirmed by the abstracted segues between the film’s episodes that sounded like a scratchy record, albeit blurred through half-shut eyes. At first, I wasn’t sure what this was but now understood it as the necessary break, if anticipation, of the next song.

Some characters enter the film’s narrative for a short period of time while others—allegiant to the film’s structure as a record album—come into being with songs later on. Certain characters, such as Jon Hamm’s Will, unfold in purpose and meaning. Will is a character who comes in with one function then opens up in many different ways.

As Helen, a widow whose house has burnt down to the ground, Ellen Burstyn delivers simple lines strangled with emotion as she ponders the moment in which we all might conceivably find ourselves: of what to save from a burning building? Given less than a minute before she is forcibly removed from the house by policemen, Helen chooses her husband’s autographed softball, not because it meant anything to her, but because it meant so much to him, and it was the meaning he had ascribed to it that announced itself as the meaning she wanted to preserve, even though afterwards it means little to her. She sells it to Will who trafficks in the marketability of such things. Helen’s story empties into Will’s when she travels to Las Vegas to meet him.

The movie as all about endings and beginnings, Pellington explained. You can’t have a beginning without an end. But this wasn’t something he had to direct his actors to understand. When filming the scene where Ellen and Jon’s characters meet for the first time, his job was to step back and just let great artists do their thing.

Due to budgetary and time restraints, Hamm added, there wasn’t much time for he and Burstyn, or any of the actors for that matter, to workshop and rehearse. When he and Pellington first shared a restaurant booth in L.A. to discuss the possibility of making the movie, they just rambled about memory, loss, grief, things they had already experienced in their relatively young lives. There was a working script that Pellington hadn’t yet run by Perry that expressed a progression of ideas about grief, about how people process grief, and how it’s different to lose a house than it is to lose a parent or a child, to lose a spouse against losing a physical thing that may have had emotional resonance for a spouse.

As Donna, Catherine Keener’s scenes towards the end of the film compound the difficulty she is having getting rid of her parents’ things with intensified loss. To film all of that in one day was hard and, for Hamm, complicated because Keener looked exactly like his half-sister. As actors, it was a trying sequence of events to get through, all the more for having already touched their lives and, eventually, being something each of us has to deal with.

Asked if making a movie like Nostalgia changed his life and if he now finds more meaning in objects than before, Hamm paused momentarily and then smiled, “No. The importance of objects is lost on me. What this film actually does to me as a person rather than as an actor playing a role is that it gives me so much more perspective on other people’s pain. The ability to look at someone and not just judge them for whatever they might be going through that moment or that day and understand that there’s a root cause for a lot of the trouble we find ourselves in is, I think, an important part of being a highly functional human being. A lot of time it’s easy to dismiss people who are going through stuff without really taking a minute and understanding that that’s coming from something. To reach out and connect on a human level and try to appreciate at least—you might not be able to help in the moment—but, just the act of connecting with another person and basically saying, ‘I understand’ is incredibly therapeutic.”

Though he and his half-sister have both lost each of their parents, Hamm detailed, life goes on. “When something tragic happens to someone you care about,” he added, “all you can do is say, ‘I’m here. Take my hand, if you want. Don’t, if you don’t. But I’m here and I’m not going anywhere.’ That’s what families do. That’s what friends do. It’s certainly what parents do. That’s a major theme of this film.”